Poster art is expanding beyond concert promotion into small-business arenas as companies break away from conventional marketing.
Next Article Add to Queue

This story appears in the January 2010 issue of Entrepreneur. Subscribe »

Metropolis doesn't operate like rival coffeehouses--which means it doesn't market its products and services like other coffeehouses either. Metropolis instead turns to Jay Ryan, the Chicago-area poster maker behind hundreds of screen-printed concert posters for renowned musicians, including the Decemberists, My Morning Jacket and Wilco frontman Jeff Tweedy. Ryan--a longtime Metropolis customer whose own band, Dianogah, regularly practices in the company's roastery space--has created two different and equally attention-grabbing promotional posters for Metropolis, both printed by hand at his Skokie, Ill., print shop, The Bird Machine. Pasted up in the windows of Metropolis' wholesale clients throughout Chicago, the posters are not just a sign of an exemplary cup of coffee, they also communicate the company's commitment to old-school virtues like authenticity and handicraftsmanship in a world where homogenization and mass production are the status quo.

"We're a young company in a hip business--the people who work for us are rockers, our customers are rockers, and we're trying to be rockers, too," says Metropolis co-owner Tony Dreyfuss. "We're artisan in the way we do things, and Ryan's posters tie in with that philosophy. They're hand-drawn and made by a person. They're just cool. It's as simple as that."

A growing number of small businesses are turning to screen-printed posters, exploiting the medium's potent marriage of advertising and art to reach a customer demographic impervious to conventional marketing approaches. In addition to Metropolis, Ryan has designed posters for Columbia Crest Winery and the annual Illinois State Cyclocross championships, as well as InterContinental Hotels Group. The posters serve as promotional tools, retail merchandise and even sought-after collectibles.

That popularity has led a legion of artists away from the sterile perfection of digital media to something more real. "Screen-printed posters are a little different from everything else in your life these days," Ryan says. "Everything done on a computer is perfectly laid out. However, digital prints are relatively lifeless and substantially more expensive to make. Screen-printing is accessible. It's an imperfect medium with limits, but working within those limits challenges craftsmen to do better."

Ryan is at the forefront of a renaissance in rock concert art, also known as gig posters. It's a tradition that flourished during the late 1960s, when San Francisco-based illustrators Rick Griffin and Wes Wilson defined the eye-popping, brain-warping iconography of the psychedelic era. Screen-printing gave way to photocopied handbills in the ྂs, as Flower Power faded and punk ascended. But with the emergence of grunge in the early 1990s, screen-printed posters again blossomed. 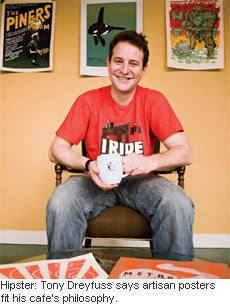 The Internet has galvanized poster art, connecting designers from across the globe with fellow artists, bands, promoters and venues. The web also is responsible for expanding the appeal of poster art to small-business marketers--and for forging an entrepreneurial community of poster artists. Limited-edition, signed-and-numbered prints from fan-favorite artists such as Ryan, the one-named Emek, Rob Jones, Tara McPherson, Brad Klausen and Aaron Horkey now routinely sell out in minutes.

"People want a physical artifact they can hold or put on their wall to show off their musical taste," says longtime poster artist Steve Walters, whose Screwball Press has launched the careers of a number of Chicago-area artists.

Posters typically sell for between $20 and $50, with production runs averaging between 100 and 300 copies. The artist often splits the run with the band he or she is helping to promote. The band sells its share of the posters at the performance or on its official website, and the artist sells on his or her website or at events like Flatstock, a series of poster exhibitions sponsored by the nonprofit American Poster Institute and held in conjunction with music festivals like South by Southwest in Austin, Texas, and Bumbershoot in Seattle.

"There's no other scene where you can get this level of quality art for $20 or $30," says Mitch Putnam, who owns online retailer Postersandtoys.com .

The online nexus of the poster art community is GigPosters.com , a website devoted to cataloging the evolution of the medium. Founded and operated by Clay Hayes, who also edited the 2009 Quirk Books anthology GigPosters: Rock Show Art of the 21st Century, the site boasts more than 110,000 posters from nearly 9,000 artists.

"GigPosters.com brings people together and showcases what's out there in the world, whether it's different art, different mediums or different music," Hayes says. "It brings together a community of like-minded people and helps them get better at what they do."

"Gig posters are a really good business card. A lot of people see that work," says illustrator Diana Sudyka, Ryan's wife. "When I do gig posters, it often leads to other jobs." For Sudyka, that includes the album design for Andrew Bird's 2009 Noble Beast release and illustrations for two books in Trenton Lee Stewart's bestselling children's series The Mysterious Benedict Society.

Poster art also can spark new relationships. In 2003, Austin-based artist Rob Jones created a poster for the White Stripes' performance in Lyon, France, without the band's permission. The group was so enthusiastic about Jones' effort that it commissioned him to create future posters. Jones' artwork is now synonymous with the White Stripes--he designs their album art and related merchandise, and the collaboration extends across frontman Jack White's side projects, the Raconteurs and the Dead Weather.

Jones also is involved with the Austin cinema chain Alamo Drafthouse's Rolling Roadshow tour, a series of outdoor screenings that present famous movies in the locations where they were filmed. Jones curates the original posters commissioned in conjunction with the events, assembling a who's who of artists to interpret movies spanning from The Searchers to The Shining. "The posters are good publicity," Jones says. "They fulfill the aim of bringing attention to films that the Alamo crowd likes."

But you don't have to be a hip, left-of-center business like the Alamo Drafthouse or Metropolis Coffee to maximize the potential of poster art, he says. "Anybody can use posters. As long as the artwork is desirable, people will want it."

As consumer and entrepreneurial interest in poster art continues to grow, so too does the attention of the music industry. Superstar acts Pearl Jam, Phish and Dave Matthews Band inspire some of the most rabid fanaticism among poster collectors.

"We're going to see artists dealing more closely with bands as posters become more viable merchandise," says Postersandtoys.com's Putnam. "Now that bands are selling 100 posters per show, they're embracing this as their official merchandise, as opposed to something that just advertises the show."

Artists such as Ryan are wary of corporate influence. "It's going to be interesting to keep an eye on all the record labels who have screwed themselves as they start looking at posters as a viable commodity and demand a bigger hand in controlling them," he says.

The art and business of posters may change, but its practitioners are here to stay. "I don't know of any other design job with this much creative freedom," Screwball Press' Walters says. "At the end of the day, I have something that I created myself, from conception to finished product, that I can hold in my hand. And that's a rare thing."

That ethos speaks directly to Metropolis' Dreyfuss and other businesses chafing against the norm. "Traditional marketing and branding are so static," he says. "Posters are a more authentic form of communication. Having an independent, rock 'n' roll image is a lost art."

Opening Acts: How to get a start in poster art

Todd Slater was a graphic design major at Stephen F. Austin State University in Texas when he started collecting concert posters. As his interest grew, Slater began frequenting GigPosters.com, collecting tips and insights from the artists posting on its user forum. In 2004, he made his first professional foray into printmaking. He's now one of the busiest illustrators in the business, creating posters for acts ranging from Neil Young to Nine Inch Nails to Ween.

"What's appealing about gig posters is you can do everything yourself--you can design yourself and print yourself," Slater says.

Slater is the quintessential example of an artist directly inspired by the digital community nurtured by GigPosters.com. The site continues to welcome aspiring talent at a snowballing rate, but established artists warn that the perception of a career making concert posters doesn't necessarily line up with the reality.

"People see the success of artists like Jay Ryan and think they're going to make a million dollars, and that's not the case," says Steve Walters, founder of Chicago studio Screwball Press. "It's very easy to start out. But it's also very labor-intensive, so some people give up right away. "

Walters' Screwball Academy offers budding poster artists a hands-on course: Students arrive at the studio with black-and-white line art and leave with as many as 50 three-color, 11-by-17-inch prints they produce themselves, created either during the course of a six- to eight-hour session or two shorter sessions. Screwball graduates can then return to the facility to print additional projects.

Here's other expert advice for artists looking to draw up a career in gig posters:

It's who you know. "With anything you get into doing, it's important to do what you know," Ryan says. "If your brother's girlfriend is playing at a local coffeehouse, that's where you start, and you take it from there."

Just do it. "Don't wait for people to approach you," illustrator Diana Sudyka says. "Be disciplined, get out there and stick with it."

Be professional. "In the beginning, a lot of my success came from my dependability," Slater says. "I was so eager to make posters that promoters and bands put up with my inexperience because I was so on top of things. I ran a really organized show. Be dependable, and the art will improve from there."