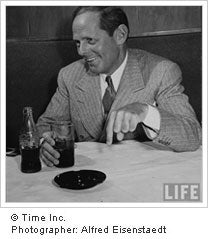 I explored the concept of secret hand signals in Part I of this two-part series. I started with the story of a man who became famous in the 1940s for his elaborate set of signals and explored secret signals used by modern-day entrepreneurs. Here, I'll go a little more in depth in a Q&A with an entrepreneur who's also a deft secret-hand-signal expert. (As a bonus I'll touch on secret code words and how to properly use them in conversations.)

Andy Abramson is CEO and founder of Comunicano, a Del Mar, Calif.-based marketing communications company. He took his communications know-how to the next level internally through numerous secret hand-and-body signals he used with a former partner. "We were so good at it that it spooked people," Abramson says, adding that people still need to be discreet. "It's an art, and I can share how it's done and what one needs to do to be good at it."

LW: What sort of hand signals did you use?
AA: We used all kinds of signals: finger-pointing, hand raises, eye movements and facial expressions.

When did you decide you needed a way of communicating with your partner without clients knowing?
We had worked together and were friends for so long it was really just a matter of knowing each other--the same way a married couple know what each other is thinking. In reality sometimes only a look was all it took. It did, however, spook other people out. A few other team members knew what was going on, but few could make sense out of it.

What are some examples of how you'd use the signals?
We would use signals that were along the lines of "go bring in such and such," which would be a person or a document, without saying a word. We knew each other's thoughts since we spent a lot of time on strategy before meetings, figuring out where a conversation or meeting might lead. It was especially valuable when working with agencies, and we were a few steps ahead of them and they had to keep up with us.

How would your partner take action after you gave the hand signal?
The action was immediate and very much timed to what was being discussed. There was no lag--no missed insight.

How did things improve after you adopted hand signals?
It helped us a lot. We were able to stay on the same wavelength with each other. We were always pressed for time, and the nonverbal communication helped keep things on track.

Did clients ever look at you funny when you used them?
Most didn't know it was always going on, as the expressions, gestures and signals were very much in the flow of a discussion. Only after being in a lot of meetings would people realize there were two people of one mind who could communicate without speaking.

Has anyone ever called you out for using them?
Not in the meeting, but a former basketball star and later coach joked one day that the two of us should never be allowed in the same meeting. He was used to those kinds of nonverbal communications on the basketball court, and it was obvious to him that what we did in meetings was what players did on the court. Figuring out the language, of course, was the hardest part.

What tips do you have for entrepreneurs who might want to try inventing and using secret hand signals, eye movements, head tilts and/or code words?
Make sure you and the other person are both really on the same page knowledge base-wise and resource-wise. Be clear on what something means, and correct privately when a gesture is misinterpreted. Don't use them in negative ways. Only use them to keep things moving, to do something that's needed or to eliminate wasted effort.

Beth Shaw, owner of YogaFit, a Redondo Beach, Calif.-based fitness education business, says she finds secret hand signals useful when discussing sensitive money issues in front of clients. Eye contact with a squint and scratching of the head are two secret signals in her repertoire.

Shaw uses her secret signals, along with code words, primarily with her CFO, Amy McDowell. They use signals in meetings and code words over the phone to discuss sensitive cash sales or to discuss topics related to taxes they don't want Uncle Sam to overhear. To be clear, they aren't people who don't pay their taxes--rather, they just don't want to cause Uncle Sam's ears to prick up by using words like "taxes" and "cash sales." They do, however, have a code word for tax evaders: "tax diapers." So to Uncle Sam it becomes "one big confusing conversation"--but one that makes sense to Shaw and McDowell.

"We originally had the code 'dirty diapers' to refer to taxes, which--while a part of life--are a less-than-enjoyable part," McDowell says. "It evolved into diapers being for cash sales since neither of us could remember the code we set for cash sales. However, we are still using diapers to refer to taxes as well, so it keeps the conversation interesting. The other person needs to stay on her toes to keep up. A lot of unclear mix-ups occur!"

So if you'd like to secretly communicate with staffers, consider the tips above to get started. Good luck!