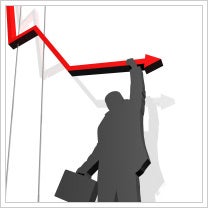 Small business owners have had reasons to feel positive, including steadily rising retail sales since last fall. But now, that confidence is starting to evaporate. June retail sales were down, the National Retail Federation reported. And business owners appear to be getting nervous.

The most recent Discover Small Business Watch study shows 75 percent of business owners now think the economy will head back down again before recovery finally arrives. More than half of owners think the economy is still getting worse.  Business owners confidence fell in July for the second straight month in the Discover study, which tracks small businesses with fewer than five employees. On the up side, though, more business owners said they plan to increase spending on business development, and cash-flow issues eased a bit. Nearly half of owners -- 49 percent -- reported their business didn't have any short-term cash-flow issues in July, and weren't putting off paying their bills. That was up from 45 percent in June.

Entrepreneurs expressed a growing lack of confidence in the ability of President Barack Obama and Congress to dig the country out of the economic mess. Sixty percent of business owners either disapprove or strongly disapprove of federal moves on the economy, up from 52 percent last year.

At the root of the gloom: Business owner are making less money. In July, 73 percent of small business owners reported current economic conditions have translated into less take-home pay for them -- that's up from 69 percent in July last year.

The Discover study also adds more evidence for the notion that Congress's new $30 billion small-business loan fund, which I wrote about yesterday, might help. Only three percent of business owners said they applied for stimulus-funded loans in the past year.

Business owners may be on to something. One reliable predictor of recession with a 40-year, perfect track record -- the Economic Cycle Research Institute's Weekly Leading Index has hit a low that always previously presaged a recession. These are the folks who bring us trend information on the leading economic indicators. This is just not good.

I'll leave you with one positive recent piece of news to try and take the gloom off -- Alliance Data Systems, which runs credit-card programs for over 90 major retailers, reported the companies wrote off less bad debt in June. Uncollectible card charge-offs were 8.8 percent of balances, down from 9.1 percent writeoffs in May.

How are you feeling about the economy? Think we're just glimpsing the sunlight before plunging back into darkness, or is that glimmer the light at the end of the tunnel? Leave us a comment and let us know.