The Business of Building Artificial Reefs

An aquatic exhibits designer crafts a plan to reinvigorate his state's marine life and fishing industry.

Christopher Wojcik grew up surfing, fishing and diving the waters near Point Pleasant, N.J., a shore town known for its long beaches, arcades and nightlife. His passion for exploring the ocean never let up. In 1998, after getting a master's degree in biological oceanography from Western Washington University, Wojcik returned to New Jersey. There he was asked to help improve the animal habitats at one of his hometown's most popular attractions, Jenkinson's Aquarium. He responded by launching Ionature, a Bay Head, N.J., firm that designs and builds exhibits and habitats for zoos and aquariums. 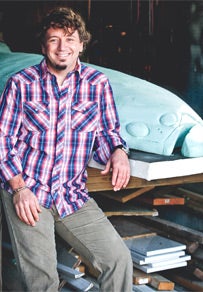 As Ionature grew, Wojcik traveled around the U.S. developing educational materials, videos, structures and other aquatic installation elements for clients such as the Discovery Channel, Miami Metrozoo (now Zoo Miami) and Oregon Coast Aquarium. (And, after dropping his mobile phone in the water one too many times, he helped invent Save-A-Phone, a packet that dries electronic devices post-dunking.)

No matter how far away he traveled, Wojcik remained worried about the limited reefs off the New Jersey coastline and the threat of overfishing. He started exploring a possible fix he'd learned about while working at Jenkinson's: artificial reefs. By sketching ideas for reef structures that could provide cover for young fish and crustaceans, surface area for encrusting organisms and interstitial spaces for other creatures, eventually he arrived at a design of a giant concrete-and-steel horseshoe crab.

In 2010, Wojcik finally had the time, contacts and resources to move the project ahead. Earlier this year, the Department of Environmental Protection approved his plan. Wojcik also recently received financial commitments from friends and interested parties to offset some of the $50,000 cost of the 40-foot crab, though his fundraising efforts continue. He plans to begin the six-week construction process and drop the reef off the coast later this year.

New Jersey launched its artificial reef program in 1984 to increase habitats for ocean life. There are opponents who say artificial reefs are kill zones where fishing boats can trawl for easy catches. Wojcik disagrees; he firmly believes the reefs create more habitats and expand the areas where sea life can propagate, which is good for those species, the environment and the state's fishing industry. He also hopes the reef will become a draw for scuba divers anxious to learn about the species it houses.

The USS Oriskany, a sunken aircraft carrier off the coast of Pensacola, Fla., is the largest artificial reef in the world.

Since word got out about his plans, Wojcik has taken on other commercial reef commissions. His ideas are a sea world away from the nondescript norm. One of his reefs, which will be dropped near Sea Girt, N.J., will blend the cremated remains of a local fisherman with concrete and steel to create a 10-foot flounder sculpture.

"It's a great memorial," Wojcik says. "His family will be able to scuba dive near it [and watch] it attract the very type of fish that he loved."