By Mikal E. Belicove May 31, 2011
Opinions expressed by Entrepreneur contributors are their own. 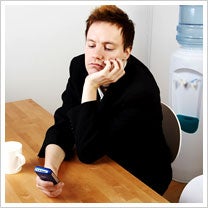 A number of the tools you might be using at your business to increase productivity may be doing the exact opposite. A recent survey of people working in sales, marketing, human resources and legal departments in U.S. businesses of all sizes claims that collaboration and social tools are actually costing businesses millions of dollars in lost hours.

Emailing, text messaging, instant messaging, switching windows among stand-alone tools and applications, and checking personal accounts on social networking utlities like Facebook, account for nearly 60 percent of work interruptions, says the study, which was conducted by uSamp and commissioned by social email software provider harmon.ie (pronounced "Harmony"). Forty-five percent of employees surveyed said they can't work 15 consecutive minutes without interruption. Another 53 percent figure they waste at least an hour a day because of distractions brought on by these tools.

Based on an arbitrary salary of $30 an hour for the average employee, the study claims that the one hour of disruption each day costs companies $10,375 per employee per year, meaning that a company with 1,000 employees loses more than $10 million per year.

Computer use and social applications catch the brunt of the blame for the distractions, surpassing traditional stalls such as phone calls, chatting with other employees and impromptu meetings. Survey-takers said processing emails were responsible for 23 percent of distractions, followed by switching windows to complete a task (10 percent), taking care of personal business on Facebook (9 percent), instant messaging (6 percent), text messaging (5 percent) and surfing the web (3 percent).

While I don't disagree that such social tools result in interruptions throughout the work day, I do take exception to the study's claim that using email, instant messaging and the other tools cited in the survey can be termed "distractions." The bottom line is this: Email has to be checked, switching windows is required to get anything accomplished, and text and instant messages are quickly becoming a must for people working in sales, marketing, human resources and legal departments. At least for this working stiff, these tools are part of the typical day's workflow. It's not distracting. It's how work gets done.

I'd be willing to bet that some of the 9 percent of respondents who said Facebook sidetracks them have replaced personal conversations at work -- otherwise known as "chatting around the water cooler" -- with checking their Facebook accounts and interacting with friends. Information overload is a significant issue for many workers, but implying that the use of email, instant messaging and switching windows among disparate standalone tools and applications only makes things worse isn't really reasonable when you consider these electronic godsends are a huge part of the business workflow.

Do you think your business is losing productivity due to social tools? Let us in the comments section below.