What Entrepreneurs Can Learn from Borders' Demise

Carol Tice
Owner of Make a Living Writing
July 21, 2011 min read
Opinions expressed by Entrepreneur contributors are their own. 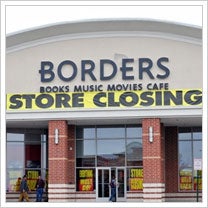 If you're like me, you can remember when the first Borders bookstore opened in your town.

I thought: what a big, luxurious-feeling bookstore…with a coffeehouse inside, too. By 2010, the company had more than 250 stores in the U.S., about 10,000 employees worldwide and sales had mushroomed to $2.3 billion.

Independent bookstores feared the mega-bookstore chain. Wags said it was the beginning of the end of the independent bookstore. And Hollywood even made a movie out of it: Remember Meg Ryan's Shop Around the Corner in the 1998 film You've Got Mail?

My how the mighty have fallen.

Now, Borders is history -- its nearly 400 remaining stores are being liquidated. But the American Booksellers Association reports more than 1,200 independent bookstores are still open.

How did it all go wrong for Borders? Here are four reasons why the once-colossal chain went bust:

Why do you think Borders went under? Leave a comment and let us know.