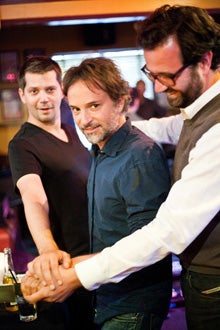 In the spring of 2009, Mikkel Svane sat in a Copenhagen apartment, facing the modern version of a dilemma that has confronted prospective U.S. immigrants for two centuries: Should he stay in his home country of Denmark, close to family, or set out for a distant land in search of opportunity?

Zendesk -- the customer-service software company he co-founded in 2007 with Danish countrymen Morten Primdahl and Alexander Aghassipour -- was quickly outgrowing its space in Aghassipour's small loft. The company, which developed an online tool to automate the process of tracking a help-desk ticket, needed money to expand. U.S. venture capitalists were ready to invest, but only if the three co-founders agreed to move to the U.S.

"With all the VCs we talked to, the money and the move had to go hand-in-hand," says Svane, 40. "The U.S. has an industry [designed] to help startups succeed like nowhere else."

While Primdahl and Aghassipour were game for a move, Svane was hesitant to uproot his family – including two young daughters and a young stepson -- far from their other close-knit relatives.

"It's not just a different country, it's a different culture," Svane says. "We felt a lot of uncertainty about moving small kids." But Svane and his wife ultimately agreed to the move, with the stipulation that they would return to their homeland within a few years.

So the Zendesk team first moved into an office in Boston, a city that's home to first-round investor Charles River Ventures. Then they went on to another site in San Francisco's South of Market neighborhood within a year. Two years later, Zendesk is doubling its space when it moves about a mile away to a new 17,000-square-foot office in August. And because it's in a new enterprise development zone near Twitter's new home on Market Street, Zendesk will save on payroll taxes for its 90 workers. Svane expects to have 150 employees by year's end.

The company appears to be gaining quick traction, as its current customer base of businesses has topped more than 10,000 and it supports over 30 million users. Zendesk's success is due in part to how easy its software is to set up and tailor for businesses that use it.

"It's unbelievably customizable," says Marc LaFountain, head of community support for Tumblr, a New York startup that hosts and supports 24 million blogs. "We can serve our users the way we want, instead of fitting into someone else's template,"

Related: Lessons Learned -- How Tumblr Recovered from a Business Crisis

LaFountain says, adding that Tumblr tracks between 1,500 and 2,000 customer-support emails every day using Zendesk tools. More than a tenth of those are handled automatically, thanks to the software's sophistication.

Zendesk's product is also relatively inexpensive, considering even large corporations can be up and running over the Web in less than a week for as little as $25 per user per month, according to the company. Compare that with often-expensive enterprise software projects that can require an army of consultants to install.

In December 2010, Zendesk raised a $19 million round of investment led by venture-capital firm Matrix Partners. Existing investors Benchmark Capital and Charles River also put in new money. To date, the company has raised about $25 million. Within a month of the latest capital raise, the company hired Silicon Valley veteran Zack Urlocker, a former executive with database software company MySQL, as chief operating officer.

"The founders' vision for the company was very compelling... and there was solid execution behind it," says Urlocker, noting that the quality of the founding team was the main draw for joining the company. "They had 7,000 customers before they hired a single sales person."

Urlocker adds that one of the things the founders did right was to foster an open, transparent culture – including regular all-hands meetings where all input is welcome. New employees also have to spend a few days on the customer support desk. The company also encourages risk-taking among its engineers, which has helped speed up product development. Zendesk usually puts out updates to its product every week.

"We try to push the envelope when it comes to product innovation," Svane says.

As its CEO, Svane has been "the very steady hand" at the company's helm, according to Dana Stalder of Matrix Partners, who first met Zendesk's founders while they were in Copenhagen. That has freed chief technology officer Primdahl and chief product officer Aghassipour to focus on software design and development.

However, Zendesk's journey -- and that of its founders – has had its share of bumps along the way. For example, when the company moved to San Francisco in 2009, it did so in part thinking that engineers would be cheap and plentiful, considering the tough economy then. But finding and landing the right workers has been "hard, very competitive from the start," Svane says.

Svane and his wife also decided to make the U.S. their permanent home after all, which has meant facing the cumbersome immigration process.

"You can't underestimate how much time and money it takes," he says. "We're in line with everybody else."

Still, Svane and his wife earlier this year bought a house in San Francisco and have begun to feel more at home there.

"We feel lucky and privileged to be here. It was the right decision, but it was tough. It's required a lot of personal sacrifice," Svane says.