How Daisy Cakes Reeled in a 'Shark'

By Diana Ransom September 15, 2011
Opinions expressed by Entrepreneur contributors are their own. 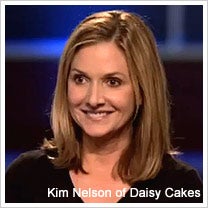 Kim Nelson may have learned how to bake from her grandmothers and her aunt, but wrangling money away from a shark is a skill she picked up all on her own.

In a recent episode of ABC's Shark Tank, judge and investor Barbara Corcoran -- against the advice of her fellow judges -- agreed to hand over $50,000 to Nelson, who owns Daisy Cakes, a cake-making business out of Spartanburg, S.C. Although Nelson had to give up 25 percent of her company's equity in the process, she came away with funding, instant notoriety and spate of new orders.

What's more, Corcoran herself says Nelson and Daisy Cakes is her best investment on the show to date. "Daisy Cakes has been selling over 10,000 cakes a week from the day she appeared on Shark Tank. Prior to that, she had sold roughly 1,000 cakes over two years," says Corcoran.

So how did she reel in a shark when her business was merely a guppy? Here are four ways Nelson's pitch stood out:

1. A quality product: Nelson says her secret for baking delicious cakes is simple. All you need is hand-sifted flour, farm fresh eggs and a personal touch. And though all of the judges on Shark Tank proclaimed Nelson's cakes as the best they've ever had, everyone -- save Corcoran -- passed on the investment. Corcoran says she noticed something: "When you passed your delicious cake around, every guy here ate more than 50 percent. But after each of these guys dropped out, they bent forward and had another bite." So in spite of her reservations about Daisy Cakes pint-size, Corcoran decided the product was good enough to merit an investment.

2. Sales: Though modest, Nelson was able to demonstrate an impressive level of sales. From October through December last year, Daisy Cakes had amassed a little over $27,000 in sales after appearing at just three holiday shows in Baton Rouge, La., Lafayette, La., and Houston. She was also able to tout a recent deal with Whole Foods where she would soon sell her packaged lemon curd.

3. Ability to scale: Though many of the Shark Tank judges weren't convinced, Nelson did make a case for being able to bake more cakes if demand suddenly surged. She noted that she uses a commercial kitchen and had the ability to produce 5,000 cakes in 30 days. What she didn't have, however, was a more concrete plan for how exactly she would put investors' dollars into action

4. Passion and sales savvy: Nelson has "the best tasting cake this side of the Mississippi, no doubt," says Corcoran. "But what she really has is inordinate passion and the ability to sell her product." That, she adds was the first thing that attracted her to Daisy Cakes. "I've never seen a business that's succeeded that didn't have a salesman at the helm," Corcoran says.

What qualities helped your business's funding pitch stand out? Let us know in the comments section.