Building a Business on Busy Schedules and Making Errands Pay 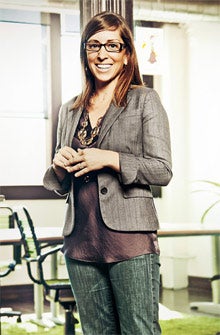 After a long week, Leah Busque and her husband, Kevin, were waiting for a cab to take them to dinner when a quick search of the pantry revealed a problem: They were out of dog food. Running out for kibble on a cold February Boston night wasn't in the plan, but their 100-pound yellow Labrador Retriever, Kobe, had to eat.

At the time, Twitter had just entered the scene, but location-based platforms like foursquare were nonexistent, so there was no way to quickly put the word out to neighbors. Seeing opportunity, Busque quit her job as an engineer at IBM a few months later to build the first version of TaskRabbit, originally called Runmyerrand.com, in September 2008. The service matched people who needed errands run, domiciles cleaned, groceries bought and the like with people who were willing to lend a hand in exchange for a few bucks. The service makes money by tacking on an average of 15 percent to every task fee. The launch focused on Busque's community of Charlestown, just north of downtown Boston, and expanded throughout Boston and into Cambridge within six months.

After participating in the fbFund Rev, a small incubator program and seed fund run by Facebook, Founders Fund and Accel Partners, which included $15,000 in funding ("enough to cover my travel for the summer between Boston and San Francisco," Busque says) she launched a presence in San Francisco and went out to fundraise in a more formal way. In May, the company closed a $5 million Series A funding round led by Menlo Park, Calif.'s Shasta Ventures. TaskRabbit had previously raised $1.8 million in seed-round funding.

Shasta's Sean Flynn was immediately intrigued by the company's aim at urban dwellers who can afford to throw a bit of money at their needs.

"A lot of the companies we see out there seem evolutionary rather than truly revolutionary," says Flynn, who now sits on TaskRabbit's board. "This felt like something that had the opportunity to be truly disruptive."

Of course, any time you pair strangers together, there's risk--like the headline-grabbing "craigslist killer." Busque says she contemplated that aspect even before she left IBM. TaskRabbit's policies work to vet prospective service providers. TaskRabbits, who now total more than 2,000, go through a four-step process that includes an online application, video interview, online quiz and criminal background checks and Social Security number traces.

"It's not an open marketplace where anyone can sign up and decide to pick up your dry cleaning," Busque says.

The new funding round is fueling "aggressive but thoughtful" expansion into new markets, including New York City, Los Angeles and Chicago (Seattle is next on the list). Busque and Flynn say that the company has plans to test the waters in smaller markets as well, but they recognize that this will take time. Recently the company released a mobile app that allows users to hire TaskRabbits via their iPhones, and a subscription service for the app is in the works to manage repeat tasks, like weekly grocery shopping or housecleaning.

"We don't want to light up every city today because, frankly, it does require a little bit of nurturing to get the ball rolling," Flynn says. "By putting a bit of care into it, you can make sure that when you do launch, things work well, and you've got both sides of the marketplace--supply and demand."