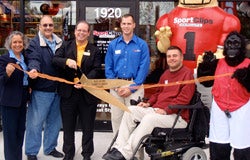 J.J. O'Connor, in red, and his business partner Dick Murak (standingnext to him, in blue) with fans at the opening of a Sport Clips store.

J.J. O'Connor recalls his first exposure to franchising, back when he was a 15-year-old hockey player working at his friend's father's White Hen Pantry convenience store in the Midwest.

"Seeing my friend's father and the kind of lifestyle he lived, I thought, `That's what I want to do. I want to own my own business,' " O'Connor says.

A year later, O'Connor suffered a paralyzing hockey injury. Now 33, O'Connor is a quadriplegic with just "a little bit of movement throughout my whole body."

That hasn't stopped the Mount Prospect, Ill., resident from pursuing his early entrepreneurial goal, however.

While he requires 24-hour care and can't stand on his own, he can use a computer mouse and voice-recognition software to run the back-end operations of his Sport Clips hair-cutting business, which he operates with partner Dick Marak, his best friend's nephew.

O'Connor, who graduated with a business degree from Lake Forest College outside Chicago, opened two Illinois stores with Marak within a two-week period in 2008, purchased another in Wisconsin in 2010, and are in the process of opening a fourth location. And they hope to open a fifth, O'Connor says.

Running the business allows O'Connor to work from home, where he lives with his parents, grandmother, three of his five sisters and his dog. He also works as web manager for the Amateur Hockey Association of Illinois, chairs USA Hockey's Disabled Hockey Section and does motivational speaking.

"A situation like mine takes a whole team of people to help out," he says. "It's comfortable and convenient to live at home. And really I'm a family person. I love my sisters very much, my mom and dad; I like being around them."

Because of his disability, it's hard for O'Connor to sit and work for the 10- and 15-hour days entrepreneurs often have to log.

"Sport Clips was fitting for me because I didn't have to necessarily be there all the time, all day long," he explains. Marak, a Marine veteran who served a tour of duty in Iraq, spends time in the stores, while O'Connor handles marketing and accounting duties on the computer.

Neither knew anything about cutting hair, which wasn't necessary for being a franchisee of Sport Clips, which offers a "just-for-guys haircut experience" in a sports-themed environment.

When O'Connor and Marak talked about what kind of business to open several years ago, a friend mentioned Sport Clips to O'Connor. The franchise has more than 800 locations across the U.S. Startup costs range between about $150,000 and $275,000.

But Marak at first wasn't sold on hair, O'Conner said. "He said, `Hair? We don't know the first thing about hair. How much can you make on haircuts?' " O'Connor recalled. "We started looking into it further, and the franchise business model just seemed to make sense."

O'Connor and his partner had considered opening an independent business but found the support offered by Sport Clips appealing.

"This business in particular is good for someone in my situation," O'Connor said. "We felt that the support and the name would be helpful and it has been. Hopefully it's been a win-win for both."

In addition, Sport Clips is a veteran-friendly company that, like other franchisors in the International Franchise Association's VetFran program, offers incentives to veterans like Marak.

For someone who has participated in team athletics since early childhood, the sports theme and teamwork fit well.

"Having the structure and ideals of a team," O'Connor says, "was an obvious appeal for me."