What Every Entrepreneur Can Learn from Hair Club for Men

By Erika Napoletano December 30, 2011
This story appears in the January 2012 issue of Entrepreneur. Subscribe » 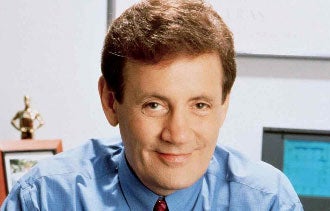 Editor's note: Erika Napoletano is one of the speakers at our annual Growth Conference on Jan. 11, 2012 in Long Beach, Calif. Attendance is free, but register now to save your spot. You'll learn branding secrets from Napoletano and learn from top business leaders in nearly a dozen hands-on seminars.

In 1976, a twentysomething fella named Sy Sperling found himself treading water in the aftermath of a difficult divorce. A receding hairline and extra weight meant fewer options for him in the dating pool.

Who's going to go for the overweight guy with thinning hair and a comb-over? he thought. Self-esteem was at an all-time low. Sure, he could deal with the weight with some lifestyle changes, but lifestyle wasn't going to improve his hairline. In the '70s, hair transplants looked more like picket fences, and hairpieces were, well, not an acceptable option. After a fair amount of searching, Sperling happened upon the idea of hair weaving. This process used natural hair and meant that he wouldn't have to take his hair off every night.

"It was like the extended-wear contact lenses when those came on the market, but for hair," Sperling says. "It was an instant feeling of being more free--it gave me the permission to be active again."

Inspired by his newfound self-confidence, Sperling founded Hair Club for Men. In 1982, the company aired its very first commercial. Who knew these would be the first steps in what is today a multimillion-dollar company (now known as Hair Club after branching out into both women's and children's services) servicing more than 50,000 clients each year?

Laugh all you want at the iconic commercials and their famous tagline--"I'm not only the Hair Club president. I'm also a client." Sperling built an entrepreneurial empire based on personality, transparency and a sense of humor. So what can today's entrepreneurs learn from Sperling and the Hair Club brand, both of which are now deeply rooted in pop culture?

Withstand Market Blips
"Someone who recognizes demand and is able to provide a product or service that meets that demand in a really unique way has a great start," Sperling says. "You have to be able to withstand the blips on the screen and build a resilient business."

His advice to someone who might be intimidated by having an idea that competes with one of the big players in the space? "Look at what they do. See how you can improve. Build a business based on that," he says. "Big companies might create an industry, but they also beg for competition." Businesses can always improve on existing solutions in the market.

Know Your Audience
While it might be astonishing for today's entrepreneurs to believe, Hair Club for Men generated roughly 95 percent of its new customer base from its kitschy commercials. And clients have remained extremely loyal. "I knew how my product made me feel, and I knew that other people wanted to feel this way," Sperling says. But that was just the beginning. Sperling took the time to get to know his audience and used that information to shape the product.

Hair Club for Men moved from its original retail-style locations to commercial office space with signage that says "HCM." That's it. Why would a business that's dedicated to making people look and feel better move away from locations with heavy foot traffic? "The service we offer is highly personal and we shaped the business to respect that," Sperling says.

When you know your audience, you can use that information to grow your business--even if customers aren't going to run out and tell their best friend about it. "I built this for the clients," Sperling says. "I listened to what they wanted. They repaid me by becoming loyal customers."

Personality is Key
Hair Club for Men built an enduring business based on its personality and the people representing the product offering. "We used real people in all our advertising and marketing," Sperling says. "The company had terrific growth because people could see that they were just like the people in our ads. It's all about perception, believability and reality."

It also helps to have a sense of humor. Sperling has been featured in skits on Saturday Night Live and made multiple appearances on Late Night with Conan O'Brien and The Tonight Show with Jay Leno. David Letterman has even featured either Sperling or Hair Club on his infamous "Top Ten" lists on multiple occasions. That's the draw that personality coupled with a sense of humor can have for your brand.

In 2000, Sperling sold Hair Club to a private firm for more than $40 million and remained on board as a consultant; five years later, Regis Corporation, a multibillion-dollar company and leader in the hair-care industry, purchased it for $210 million.

"The Hair Club product is something I've believed in for over 30 years," Sperling says. That belief is what kept me heading in the right direction. And I'm not only the former president. I'm also still a client."