As people increasingly turn to the web to make connections and build relationships, more entrepreneurs see business opportunities in online social networking. But if you decide to create an online community, you also should be prepared to protect your users from scammers and spammers.

Fraudulent activity on social networking sites can range from relatively harmless, albeit annoying, spam messages to potentially dangerous scams. A spam email message may be sent to thousands of people on a social network directing them to another website to possibly sell something, often pornography. In online scams, a con artist often sets up a fake profile, develops a relationship with an innocent victim, and then tries to convince that person to wire him or her money.

The North American Securities Administrators Association, an investor protection organization, has seen serious fraud in online networks, including a Craigslist post for a "stock trading program" that promised 100 percent returns monthly and a dating site scam involving the sale of worthless gold certificates from Ghana.

Online profiles provide fertile ground for con artists. "The person behind the profile may be deliberately mimicking your likes and interests to lure you into a scam," David Massey, president of the association, said in a statement. "A con artist can take advantage of how easily people share background and personal information online by using this information to make a highly targeted pitch."

Dating companies, in particular, frequently deal with spam and scams. Online fraud-management company iovation found that 3.8 percent of all of the "transactions" it processed on online dating sites last year were fraudulent, more than double the 1.4 percent rate in 2010 and 1.5 percent in 2009. Transactions in this case include any online abusive activity that iovation tracks, including hijacked accounts, scams, chat room abuses, fake profiles and spam.

Keeping the number of fraudulent profiles to a minimum in the online dating industry is a constant battle. "It is like an arms race. The spammers get better at what they are doing, they learn about the chinks in the armor, and the dating sites react," says David Evans, editor of Online Dating Insider, a blog covering the business of online dating.

It's tempting to think that a scam would be obvious. But scammers "are trained criminals; they know how to gain people's trust," says John Breyault, vice president of public policy, telecommunications and fraud at the National Consumers League. "The criminals that perpetrate this fraud are very good at manipulating people's emotions and ultimately getting them to send money."

Scams can be detrimental to a dating website's reputation, in particular. "To acquire a reputation where bad things happen to their users is arguably one of the worst things that can happen to their brand," says Breyault.

The problems grow more complex as a social network attracts more users. That has certainly been the case for HowAboutWe.com, a Brooklyn, N.Y.-based online dating site. As the site grew, its product development team and technology engineers worked together to develop a multi-tier defense program to keep spam to a minimum.

First, a computer algorithm identifies triggers the dating site deems suspicious behavior. That could include a certain type of IP address, the frequency of messages sent, or a combination of words, says Brian Schechter, a co-founder of HowAboutWe. Any profile that gets flagged by the computer algorithm gets temporarily held in a "pen," while a staff member manually reviews it for any suspicious behavior. When a profile is being held, the user can send messages, but others won't receive them until the staff has approved the flagged profile and pushed it back out of the pen.

Schechter recommends that other entrepreneurs react quickly when they suspect a scam. "Take it really seriously because if you don't, you are sort of allowing a virus to go unchecked," he says. "And if you let that happen, the health of the ecosystem you are creating is in jeopardy." 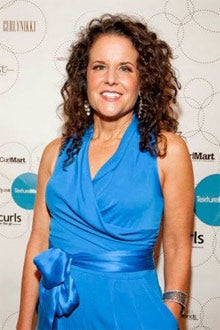 Michelle Breyer, the co-founder of NaturallyCurly.com, depends on the members of her loyal online community to help her police the site's discussion forum, CurlTalk.
Photo courtesy of Margarita Corporan

Some entrepreneurs with social networking platforms also rely on loyal users to help police the site. When Michelle Breyer launched NaturallyCurly.com as a forum for people with curly hair 14 years ago, the online discussion board CurlTalk attracted some fraudulent users who posted links to try to sell products or drive traffic to pornography sites.

Breyer first installed a filter that requires users to type in cursive letters that a visitor would read. That made it much harder for spammers to send mass emails. She also listened to her community of curly-haired chatters. They pointed out suspicious-looking discussion threads, using the site's "report problems" link. "We have amazing members who help us self-police," Breyer says.

"The discussion board was really the dynamic area of the site and that was really what got people to the site," she adds. "If people don't feel comfortable coming to a place for whatever reason--whether it is spam, mean people, people selling to them--you are going to lose the community."

Certainly, it's good business to try to protect your customers from scams, but it also is becoming legally necessary for dating sites in some states. New York and New Jersey have already passed legislation called the "Internet Dating Safety Act." Protections there range from notifying users about whether a dating site has performed background checks on customers to requiring sites to recommend safety precautions to users, says Caitlin Moldvay, the author of an IBISWorld report on the online dating industry.

Other states, including California, Florida, Michigan, Texas, Illinois and Connecticut, have proposed regulations, some of which would require dating sites to perform background checks. Such legislation would make it more expensive to operate dating sites, but the safeguards could boost business by offering customers a sense of protection.