By Diana Ransom March 8, 2012
Opinions expressed by Entrepreneur contributors are their own. 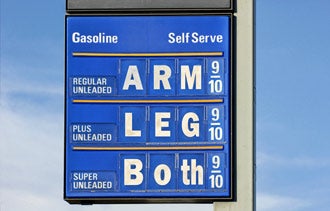 You don't need the President of the U.S. to tell you that gas prices are too high. But it may be helpful that he is talking about it.

At a sit down with members of the Business Roundtable this week, the President announced a number of measures his administration hopes to focus on. One was energy -- how to boost domestic production of it and, by extension, reduce gas prices.

"Obviously, folks are getting killed right now with gas prices," Barack Obama said to a room full of prominent CEOs at the Newseum in Washington, D.C. "That has an impact on all of your companies, because consumers are more price sensitive when it comes to filling up their gas tank than just about anything else. That means, yes, we've got to produce more oil and more natural gas. . . It also means, though, we've got to invest in the energy sources of the future."

Enter, the newest initiative from the White House to beef up the country's clean-energy chops. At a Daimler Truck manufacturing plant in Mt. Holly, N.C., yesterday the President announced a package of domestic-energy incentives that should help -- eventually -- reduce America’s reliance on foreign oil.

Among other things, Obama proposed a $1 billion "National Community Deployment Challenge" to support the deployment of clean, advanced vehicles in up to 15 communities around the country. Obama also laid out a plan to boost the current tax credit available to consumers and businesses that purchase advanced cars and trucks to $10,000 from $7,500. The credit would also be applied to a wider array of technologies and be available instantly at a dealership or other point of sale.

The President is further proposing a new tax incentive for commercial trucks that provides a credit for 50 percent of the incremental cost of purchasing an alternative-fuel truck that's either powered by natural gas or electricity, for a five-year period. And through the proposed "EV Everywhere" research challenge, the government would invest in the development of advanced batteries, electric drivetrain technologies, lightweight vehicle structures and fast-charging technologies.

Aside from the Community Deployment Challenge, which mirrors a similar program proposed by Senators Jeff Merkley (D., Ore.) and Lamar Alexander (R., Tenn.), the other measures that the President laid out may face difficulty in Congress. For instance the "EV Everywhere" program is relying on the President’s 2013 fiscal year budget, which hasn't shown any signs of passage so far. Still, the vehicle tax credit could get the go-ahead if the Republican presidential candidates' tax priorities are any indication. Representative Ron Paul favors offering tax credits to individuals and businesses for the use and production of natural gas vehicles.

But what about gas prices? The idea, says the President, is to boost America’s energy production capacity now so future generations won't see such pain at the pump. "Every year, about this time, gas starts spiking up, and everybody starts wondering, how high is it going to go? And every year, politicians start talking when gas prices go up," Obama said at a speech yesterday in reference to Newt Gingrich's vow to lower the per-gallon cost of gasoline to just $2.50 if he becomes president. "You and I both know there are no quick fixes to this problem," Obama added.

Which, if any, of these proposals will help your company lower its energy costs? Leave a comment and let us know.