By Erica Swallow April 12, 2012
Opinions expressed by Entrepreneur contributors are their own.

It's something almost every entrepreneur worries about: bringing a terrific new product to market only to have a slew of competitors pop up and eat up your market share. Staying competitive and innovative in this type of scenario can be easier said than done.

One person who knows a thing or two about keeping a business aggressive is Leah Busque, the 32-year-old founder of errand outsourcing service TaskRabbit. Since its launch in 2008, the company has faced heated competition from a number of new startups, but has kept pace by being relentlessly agile.

Busque, a former software engineer at IBM, and her husband Kevin created the concept for TaskRabbit one night after realizing they'd run out of dog food for their hungry yellow lab named Kobe. On their way out for dinner, the duo dreamed up a service that would let people outsource many of their chores, from picking up dog food to doing laundry.

Since that first night, San Francisco-based TaskRabbit has gone up against a parade of competitors, including Agent Anything, AirRun, Fiverr and Zaarly. Yet it continues to grow at a fast clip. Since last May, TaskRabbit has tripled its net revenue and the number of tasks posted per month, also increasing its user base sevenfold. Its staff has grown from seven a year ago to nearly 50 today.

Here, Busque offers her top three tips for staying competitive, no matter what industry you're in: 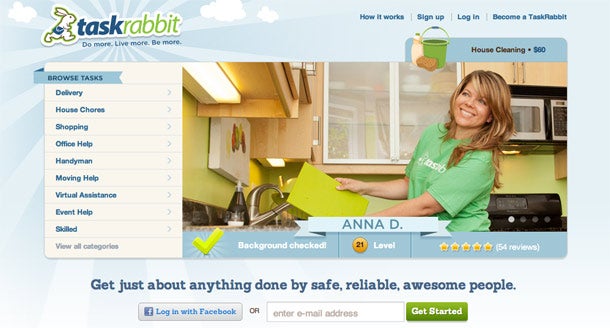 A look at TaskRabbit's homepage

1. Make product changes early and often.
Startups should be in constant update mode, Busque says. That way, users are always having the best experience possible with the product and the business is seeing maximized returns for their efforts.

TaskRabbit, for example, updates its products daily and sometimes even by the hour. The company uses analytics platform KISSmetrics to perform A/B testing, pitting two hypotheses against each other in one- to two-week studies to test the design, user experience or engineering features of its website and apps.

TaskRabbit recently did a study of its main homepage image to determine whether photos of task doers in action or illustrations converted more visitors into users. The tests showed that using actual photos resulted in at least twice as many user signups as illustrations, Busque says. So, the team chose to feature real photos as the site's main image instead of illustrated images.

For businesses new to A/B testing, Busque recommends reading the KISSmetrics blog, which also has a primer for getting started.

2. Seek out expert advisors.
Advisors, or a team of them, can be a helpful resource for entrepreneurs at every stage of starting up, but can be a vital source of inspiration and innovation when facing stiff competition, Busque says.

While some entrepreneurs may keep their companies in stealth mode so as not to tip off potential competitors, Busque says that type of thinking can be counterproductive. "The risk versus reward there doesn't make sense," she says. "You can get so much value out of talking to people and getting their feedback."

For example, Scott Griffith, CEO of car-sharing service Zipcar, has been with Busque since the beginning and serves on TaskRabbit's advisory board. From TaskRabbit's early days, Griffith urged Busque to "see how far she could take the idea." That initial encouragement still supplies Busque with inspiration.

"I wake up every morning and think to myself, 'how far can I push the company forward in the next 24 hours,'" she says. "It's an ongoing mantra." 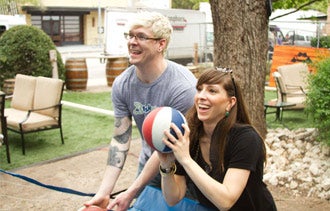 Busque enjoying some down time with TaskRabbit engineer Mike Stickel

3. Nurture your company's culture.
Effective branding is often a startup's best hope for competing in a crowded marketplace. And branding starts with a strong company culture, Busque says.

TaskRabbit seeks employees who fit its culture and are passionate about its mission. "Culture is one of the most sacred assets that a young company can have, and one that's constantly in jeopardy, particularly when [the company is] growing so fast," she says. "The people you hire and the culture you build internally is going to be reflected in your brand and who you become externally."

Busque describes the TaskRabbit brand as open, collaborative, friendly and helpful, and says her goal is to have the workplace culture reflect those characteristics. TaskRabbit's headquarters features and open floor plan that enables teammates to collaborate easily and a recreation room helps add fun to the culture.

"Stay focused on what you're doing well and what your company is doing well," Busque says. "It's easy to get distracted when the competitive landscape gets crowded and new companies are popping up all the time. But don't worry too much about what's happening externally. … A company is only as good as the team behind it."