How to Work With Relatives Without Driving Each Other Crazy 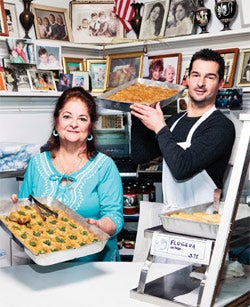 Q: How do you work with relatives without driving each other crazy?

A: OK, so the question comes with a built-in bias. Working with your next of kin needn't drive everyone nuts. In fact, a family business can offer its own rewards. Just ask Lili Fable, whose family has run New York's Poseidon Bakery, a landmark Greek pastry shop, for four generations. "With family," she says, "there's love and there's trust that you can't have with other people."

The patriarch of Poseidon was Demetrios Anagnostou--grandfather of Lili's husband, Anthony--who started the business in 1923. Today, Lili co-owns the business with her son Paul and is its heart and soul. While no family's recipe for success will apply to every business, the lessons learned by the Anagnostou-Fable clan, having sustained Poseidon since Calvin Coolidge occupied the White House, are worth noting. When we asked Lili for three secrets to working with family, she didn't hesitate.

It helps when everyone buys into the company mission. Succession experts advise that if you plan to pass your business on to your children, you should involve them at an early age, making them feel invested--emotionally, if not financially. Lili and her husband did just that; Paul and his two brothers started pitching in when they could barely see over Poseidon's countertops. "They grew up with a work ethic," Lili says, "knowing how hard it is."

While domestic comity can never be assumed, for the Fables, serious squabbles are rare. Paul says it's a matter of trust. "In business, family or not, you've got to have that trust that this person has the same interest as you," he says. "This way, when you step away, you can really step away."

It's also important to understand each family member's role in the business. When mother and son became business partners in 2000, the delineation of duties came naturally. Lili's strengths were in preparing Poseidon's signature pastries--the spanakopita, the baklava--and in customer relations. (She is preternaturally cheerful.) Paul handles purchasing, billing and the more physically demanding aspects of food preparation. "You have to let people do certain jobs and know what their strengths and weaknesses are," Paul says. "That's important in any business--family or nonfamily."

When you've been in business for nearly 90 years, change can come slowly. Paul says it's important that families allow each generation to add its own touch. For example, until he became a partner, Poseidon had never accepted credit cards.

Some things, however, will never change. Poseidon is believed to be the only bakery in America that still hand-makes its phyllo, the tissue-thin dough used in most of its sumptuous offerings. "Consistency," Lili says, "is the key to anything of value."