The Making of a Multi-Unit Franchise Maven

Michael Ansley began his career in franchising just after college as a partner in a Buffalo Wild Wings & Weck restaurant. Today the company is known as Buffalo Wild Wings (after dropping the obscure term weck, which referred to a type of kaiser roll), and Ansley is one of its most successful franchisees. As CEO of Diversified Restaurant Holdings, he owns 22 Buffalo Wild Wings locations in Michigan and Florida and has a development agreement to open 16 more.

Further, not content as merely a franchisee, he has taken on the role of franchisor with a new burger concept, Bagger Dave's Legendary Burger Tavern. The first Bagger Dave's opened in January 2008 in Berkley, Mich., and there are now six company-owned restaurants and a franchise development agreement in place.

We sat down with Ansley and asked him about his transition from upstart to multi-unit franchise maven.

How did you get started in franchising?
A Buffalo Wild Wings & Weck, or BW-3, as the company was called at that time, opened at the University of Dayton in 1994, the year after I graduated. While visiting friends on campus, I ate at the restaurant and started talking to the franchisees, and I was fascinated. They were my age, and I said, "Well, if they can do it, I can do it." So I partnered with my college roommate and his father, and we opened our own franchise in Ypsilanti, Mich.

Unfortunately, we didn't know what we were doing. BW-3 wasn't very organized at that time; it was pretty much, if you had a pulse, you got a franchise. We survived, but we learned where not to put a restaurant and how not to run one. 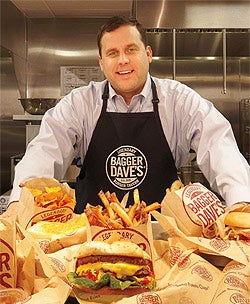 In spite of your struggles with that first location, did you always plan to open multiple restaurants?
Yes, from day one. It's just in my DNA. One restaurant wasn't going to be enough. I'm not wired to stay in one place like that. I'm always looking for the next challenge. After my partner in the Ypsilanti location bought me out in late 1998, I had a second chance. Diversified Restaurant Holdings opened our first Buffalo Wild Wings in Sterling Heights, Mich., in December 1999, our second in spring 2001, another in 2002, and it just kept mushrooming from there.

I had learned a lot, and by then Buffalo Wild Wings had evolved as well--both in name and in operations. They brought some good people on at corporate and really improved their training.

What part did you play in the company's evolution?
Prior to 2001, all Buffalo Wild Wings restaurants were still counter-service only. I'd worked in the restaurants for a number of years at that point, and I saw people's frustrations with standing in line at the counter and the bar. We were getting ready to open in a lifestyle center in Novi, Mich., and I thought, I'm not opening this restaurant without servers.

Everyone thought if we added servers, it would drive our labor costs up, but that isn't necessarily true, because servers are salesmen. That Novi restaurant went on to be the No. 1 store in the company from 2003 to 2006 and the first store to do $4 million in sales. Now the whole company's full-service, and some locations are approaching $6 million in volume.

What's your biggest challenge as a multi-unit operator?
Getting the right people in the right places, and getting them trained properly. We're up to 1,700 employees and growing. Fortunately, we've been able to grow our operations team organically.

It's pretty powerful to see people who were prep cooks and are now general managers. Even our current COO started out as a prep cook.

Why did you start Bagger Dave's?
In 2006, we wanted to diversify the company, so we looked at a number of other franchise concepts. But at the end of the day we said, "Let's try to do something on our own." As a Buffalo Wild Wings franchisee, I didn't want to compete with myself, so we focused on burgers. But we did follow their model of fast-casual pricing in a full-service environment, because it's a little more recession-resistant.

As you franchise Bagger Dave's, are you focusing on multi-unit growth?
Yes, we are. But you're not going to see us come out and say we just sold 50 or 100 franchises. We're doing three- and six-store development agreements. We want to tiptoe into franchising, and because of our infrastructure with Buffalo Wild Wings and the cash flow coming off of that, we can afford to. We can be very selective with franchisees. We can be disciplined, patient and do everything right. We just sold our first six-store development agreement to a fellow Buffalo Wild Wings franchisee.

Does your experience as a franchisee help you as a franchisor?
Definitely. If anybody knows what franchisees are going to go through, it's us. We know the types of issues that concern franchisees, and we're trying to keep an open forum right from the get-go in order to avoid those common conflicts.