A Small Talk Survival Guide for the Schmooze-Averse

People say they don't like small talk. But what those people are saying is that they don't like people. They are--and I'm not using this word without some serious deliberation--talkists. Also, they are denying an essential truth about every great thing that has ever been done: Before you do it, you have to talk about it. And before you talk about it, you have to talk about something else. And what that is, is small talk.

Small talk is a not a glorious thing. But it is the gateway to a thing that is … also not glorious, but a lot more interesting: medium talk. Which is something.

But this is about small talk--at a party, at a networking event. Which we'll take in stages. The stages are 1, 2 and 3, and there's no telling how long each will last.

Stage 1: Anything You Want to Talk About, Including the Weather
With small talk, you are advancing the conversation. But in an extremely restrained way. You are giving something of yourself. But you're not giving actual ideas. You are offering up the simplest of observations.

People think they hate small talk because it is boring. But it has to be boring. The splendor of small talk is its banality. Because small talk is a signal. The words are irrelevant. The act is what's important. And you have to stay small. Really small. You want to avoid what's large, including the thing you're probably most prepared to talk about: business.

"The key to small talk is to avoid in any way making conversation that has to do with business," says Daniel Menaker, author of A Good Talk, about how conversations work. "By definition, small talk is not goal-oriented. Or if it is goal-oriented, the goal is to make yourself conversationally available to other people in a way that shows you are not just single-mindedly entrepreneurial, but that you're a human being, and that you can find common ground."

Common ground is the whole point. Similarity breeds attraction. The more you have in common with someone, the more you like them. The subject of business is slightly too fraught. So, what to talk about instead?

And here are some examples of small talk that is too big: "I'm Kevin!" Too big. "An iceberg exploded yesterday." Too big. "You have a good cheek." Too big. "Why are we here? On Earth, I mean." Too big. Stay small.

Stage 2: Listening Mostly
The second stage of small talk can happen only after receiving a response that is equal to or greater than the content of your opener. The signal from the other person is: I'm not threatened, so let us continue this mundane banter.

There's this thing psychologists call a "promotion orientation." It involves thinking of the conversation as a series of opportunities rather than a minefield of embarrassment (thinking of it that way is "prevention orientation"). The promotion orientation involves making eye contact and smiling. (Which are the two most powerful tools a person having a conversation has at his or her disposal. You can say, "I'm into string" to a total stranger, and if you say it with eye contact and a smile, it can seem brilliant.)

The second stage of small talk is all about promotion orientation. "Don't think, Don't say this, don't do something stupid, don't go on too long," says Sam Sommers, associate professor of psychology at Tufts University and author of Situations Matter: Understanding How Context Transforms Your World. "If you have all these don'ts and negatives in your head as you go into an interaction, you tend to come off looking like someone who had a bunch of negative thoughts in their head and distracted and not engaged."

The second stage also gives you an entree to be mildly interesting. And slightly personal. Del Pedro--a bartender who has about 50 small-talk conversations a night at New York's Pegu Club (one of Esquire's "Best Bars in America")--says, "I try not to offend, but occasionally I will push things a little further just to get the conversation flowing and get people a little jacked up. For the sport of it, for fun." His small-talk hours have increased lately, as he's opening up his own bar, Brooklyn's Tooker Alley. "There are times when it's awkward," he says. "When I had to go out to raise money for this new bar, I found that's a form of small talk I'm not good at. But I got better."

Which is backed up by the scientists: "Research suggests people who are viewed by others as socially adept and good at networking actually view themselves as somewhat shy and withdrawn," Sommers says. "There's not a set personality type you have to have to make this work. It's more about practice."

Stage 3: How to Get Out, or Not
It helps to have fallback questions: two or three questions or topics you know you can pull out when you're on the spot and nervous. "We don't think quite as quickly and clearly when we're under pressure, so the more well-rehearsed any behavior is, the better we're able to pull that off when the spotlight's on. Having a good exit line never hurts," Sommers says.

At a party or a networking event (as opposed to a meeting, where the duration of small talk is somewhat fixed), there is a point at which you must decide if this is a conversation worth continuing or a conversation worth ending. The eyes are the deciding factor, not the conversation. If the other person's eyes wander, even a little bit, you should get out. If the eyes wander, you throw out your exit line. "I see a friend I need to speak to; it's been great talking to you." Or, more generously: "It's been great talking to you; I'll let you get to some other people now." Or, the best exit line ever developed: "I'm going to the bar. Can I get you something?" If the other person wants to continue the conversation, they will say yes. If they don't, they will say no. And so you act accordingly.

Or maybe it keeps going. Maybe you get somewhere. Maybe it really gets somewhere. Maybe you eventually start a business with the person you engaged in harmless banter at a party. Maybe you end up getting key advice from them. Or an important contact. Or maybe it's just social. Maybe you just pass the time talking to another human being in a generous way. The thing about small talk is: Even if it's awkward, it's worth it. 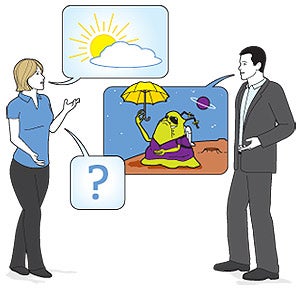 There's no shame in opening with the following subjects: the weather, the fact that it is Friday, sports.

Unadvisable: the weather on another celestial body, the fact that it was Friday three days ago, obscure sports (standing high jump, for instance).

No squinting, which is threatening.

Head-nodding should be limited.

Head-shaking should be employed only as a gesture of sympathy.

It's important to fill silences with a conversational bridge to something more interesting. "You don't say." Or: "Amazing." Or: "Really?"

When approaching a stranger, approach from the front with intent, but not aggression. Also, do not flank them. Do not charge them. Do not approach a stranger in a way that seems vaguely military. 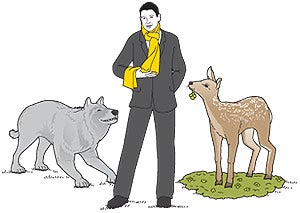 Small talk: "Cold enough?"
Schmoozing: "That is the nicest scarf I've ever seen."

Small talk: "Great canapés."
Schmoozing: "What do you think they spent on this spread?"

Small talk: "You don't say."
Schmoozing: "Would you mind repeating that figure so I can commit it to memory and then leverage it during the conversation I'm about to have with that guy over there? Did I just say that out loud? Nice scarf, Steve. Hell of a scarf."