Encouraging Employees to Put Their Personal Stamp on the Workplace

By Lambeth Hochwald August 1, 2012
Opinions expressed by Entrepreneur contributors are their own.

Anyone can hire a big-name decorator to give an office a special look. It's much bolder to invite employees to put their personal stamp on the space.

These three companies did just that, not only to include employees in the design process, but also to save money in some cases.

Bliss Integrated Communication
When Bliss Integrated Communication moves to a new office in New York this month, it will gain more space for client meetings and collaboration, as well as a new look courtesy of its employees. The B2B communications firm invited workers to participate in a summer-long photo contest in which they could shoot images of two different themes, New York City and media. Once the photos have all been submitted, the entire staff will vote on them, and the winning shots will become part of the new office art collection. 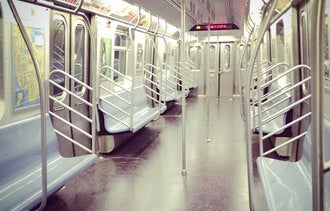 "I'm an amateur photographer myself so I naturally gravitate toward photography as art," says Cortney Rhoads Stapleton, office director. "The management team thought it would be a fun way to get our employees involved in the new office; we have a strong company culture and we try to live that as much as we can."

In addition, staffers suggested names for the new conference rooms. So far, submissions have included names of New York neighborhoods, landmarks in the cities where Bliss has offices, and key figures in the history of the PR industry.

"We believe the employee-created art and naming of the conference rooms gives our new space personality," Stapleton says. "It also offers our professionals the chance to showcase yet another talent." It also is an economical way to decorate, with the firm simply paying to reproduce the winning photos.

Related: How to Reveal Your Retail Personality

Forums Event Design & Production
In an effort to boost morale and showcase creativity, employees have been part of the decorating process for the past two years at Forums Event Design & Production, a Miami-based corporate event planning firm. "Since creativity is so important to our industry, we see employee decorating as part of that process," says Ali Peña, CEO of Forums. 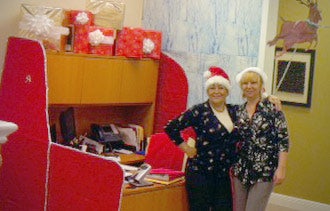 Deemed most creative, the desk on the left was designed as a sleigh, complete with gifts, stockings and a magic elf.
Photo courtesy of the company

Employees have vied for an American Express gift certificate in a contest to choose the best-decorated cubicles, and staffers have hung vision boards over their desks and posted images of the dreams they have for themselves and the company. "When clients visit our office, they find these boards to be very interesting, and they often spend time looking at them," Peña says.

Over the holidays, employees decorate the office with a particular theme. "Last year we had an '80s Halloween replete with jack-o-lanterns dressed in '80s clothes," Peña says. "During Christmas/Hanukah, every employee is asked to decorate their cubicle, and we have a contest at the end. We've had employees turn their cubicles into gingerbread houses, snow globes and fireplaces." All of these efforts save money, too. "We don't have to pay to decorate the office since everyone brings their own taste to the mix," Peña says.

Zapwater Communications
When David M. Zapata, president of Zapwater Communications, a small public relations agency in Chicago, realized he needed new office space last fall, he decided that he'd like to involve his 14 staffers in creating the office's new look. Because employees spend more time at the office than at home, Zapata wanted them to feel they "owned the space." He also wanted reinforce the company's culture of collaboration and creativity. "What better way to express that than actually designing the work space," he says. 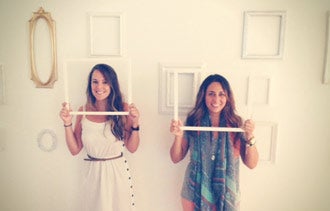 Mary Doyle and Annie Block standing in front of the frame wall at the Zapwater office.
Photo courtesy of the company

This wasn't a cost-saving proposition. "I probably spent more than I would have if I had done it myself or brought someone in," Zapata says. But he felt confident that employees could improve on the current look. For five years, the company has operated out of what was always intended to be temporary space--and it hasn't been pretty. "I picked paint colors, which I thought were brown and orange for the original office," he says. "They ended up being mustard and orange."

Zapata divided his staff into teams so each one could take responsibility for different aspects of the redecorating job, from the conference room table to the selection of desks. Anne Block, a vice president at the firm, created a chalkboard wall in the conference room, replete with white antlers. Another staffer proposed transforming the main hallway into a place to showcase work. She selected white frames of varying sizes, and staffers filled them with images for a recent pitch to a large global company. "When we recently met with a large global retailer, we filled the frames with reproduced vintage advertisements for their brand," Zapata says. "That went over really well."