One Entrepreneur's Rocky Road to Success After 'Shark Tank' 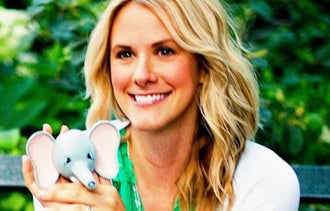 Tiffany Krumins was a contestant on the very first episode of ABC's reality series Shark Tank. At the time, her idea for a fun kids' medicine dispenser, AVA The Elephant, was little more than a thought in her head. She had no sales. She didn't even have a finished product.

"I went in there with five clay elephant prototypes," she says.

She managed to stand up to the Sharks' fierce scrutiny and scored a $50,000 investment and a mentor in real-estate mogul Barbara Corcoran, who took a hefty 55 percent equity stake. With Corcoran's help, AVA was soon on the shelves at CVS, and more big retailers followed.

Three years later, her company, Elephant Lady LLC, has seen $1 million in sales over the past 18 months. AVA is on the shelves at more than 20 major retail chains and through Amazon and other online retailers.

Related: From Zero to 'Shark Tank' Hero in 3 Months Flat

But the road to getting there wasn't exactly smooth. Krumins recently spoke with Entrepreneur about the challenges she faced in building her business -- and what entrepreneurs should know about taking on an investor:

Q: What happened right after the show?
A: I was diagnosed with thyroid cancer, and was faced with dealing with that while I built the business. I had surgery and radiation, and it all happened in the thick of it, while I was trying to find a manufacturer and get into retailers. Now, I've been cancer-free for a year.

Q: Your goal was to have the product made in the U.S. What obstacles did you run into?
A: So often you can't find partners in the U.S. willing to work with you. People think you can open up a factory for one product, but that's not going to happen. Right now I've called 100 packaging companies over the past month, and if your package isn't a certain size and you don't want 500,000 packages right now, they don't want to do it. So it was made in China originally to get it off the ground, but now that we're in more stores, we're going to be making the next run in Illinois.

Q: Any advice for future Shark Tank contestants?
A: The Sharks like inventions, something that's not just a spin on something else. Mine was an actual invention.

Related: 7 Lessons Every Young Entrepreneur Can Learn From 'Shark Tank'

Q: What's next for Elephant Lady?
A: We will be introducing our second product shortly. I'm not ready to reveal the details yet, but it is in a similar vein, a medical product for children. It'll open doors for us, having a brand versus a one-off product. Target wants you to have least two items before they'll consider carrying your products.

Q: Looking back now on the equity you gave up, do you have any regrets?
A: Not really. A lot of people don't like the idea of giving up that much ownership. But I didn't have a lot to lose. I could walk out with nothing or give her 55 percent. She ended up investing more than $200,000 in it in the long run, on a product that she didn't know if it would sell. It was her first consumer product, too. We went home and learned the industry together for nine months.

Related: Angels, Equity and a Shark of One's Own

Should entrepreneurs give up more than half equity to investors? Leave a comment and give us your view.