By Teri Evans March 8, 2013
When Cinderella premiered on Broadway this week, lead actress Laura Osnes wore Randi Rahm's signature "Diamond" gown, encrusted in Swarovski crystals, for the opening night party. As a custom couturière and entrepreneur, Rahm has built awareness of her namesake brand in part by dressing scores of celebrities with her one-of-a-kind creations for red-carpet events: Beyonce, Jennifer Lopez, Hallie Berry, Carrie Underwood, Edie Falco, Jennifer Hudson, and the A-list goes on. Her exclusive gowns range from $8,000 to $30,000. She also once designed a $2.5 million dress studded in 433 karats of diamonds that was worn at the Oscars. It was a pricier replication of Rahm's Swarovski-studded "Diamond" gown. Various iterations of the dress are loaned for big-star events, like the Broadway premiere. 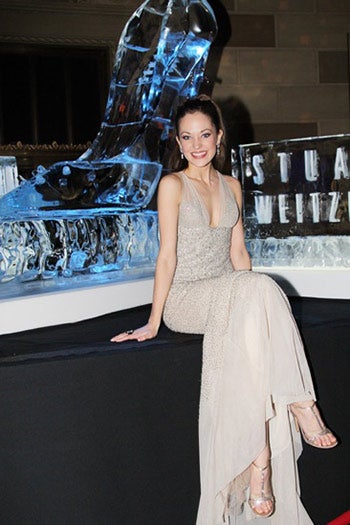 One might assume the New York designer has lived a charmed life. She describes her childhood as privileged. "My grandmother always had couture clothing and had our custom-couture clothes made for us," says Rahm, who grew up in Manhattan and West Hempstead, Long Island, N.Y., in the early 1970s.

But her life challenges would later become as intricate as her hand-beaded creations. Married at 18, Rahm started in the arts as a concert pianist and later a conductor. Within 10 years, she was navigating a divorce and searching for ways to support her two children. Her foray into fashion began as a fortunate accident. Years earlier as a hobby, she had begun designing quilts and custom dresses for little girls after owners of a fancy Long Island store saw a quilt Rahm created for her newborn son.

"When my husband and I didn't make it, I turned my hobby into a business," Rahm says. "But I had gone from my father's home to my husband's home. I didn't know what it was like to support a house or even write a check."

She took on multiple jobs -- piano lessons, freelance design -- to make ends meet. As a business owner, she is self-taught. "I learned by trial and error," says Rahm, who after operating studios in Long Island for more than 10 years, opened Randi Rahm Studio in Manhattan in 1998. Four years later, she began selling through Bergdorf Goodman. Rahm's 5th Avenue atelier has 15 employees and an office in Los Angeles. She declines to disclose annual revenues.

Barbara Corcoran: 'The Joy Is in the Getting There'
More 'Trep Talk »

Despite working in the cutthroat and fickle fashion industry for more than two decades, Rahm has a demeanor that's surprisingly tender, surfacing in peekaboo moments. In 'Trep Talk, Rahm shares insight on the realities of the seemingly glamorous life, her biggest mistake, and why she'll always help young designers, if they need it. Edited interview excerpts follow.

Hardest lesson I've learned is... people often mistake kindness as weakness. It makes you step back and be more careful, especially in business. That was always very hard for me to navigate, especially being an artist and being sensitive. While I don't love being a boss at times because it's looked at as the "big, bad boss," I have to survive and make the business work.

Words to live by: There is no such thing as no. That's my mantra. It's not, "We can't. It's how can we? Let's figure it out." That's how I've worked my whole life: I will figure it out.

Success tip for creatives: Learn to get a tough skin. Criticism will always be there and you have to believe in yourself to navigate through that. If you don't have the real passion for the business, then do something else. Learn about related fields and explore other options around what you love.

My biggest mistake in business... was dealing directly from my emotions first and not dealing through my head. It's OK that not everyone likes you. Not everyone is going to like you, and that was very hard for me.

Secret to longevity in a fickle industry: If you look at the most fashionable people throughout time, their look is timeless. My sustainability comes from knowing who I am and who my client is. I've never deviated from that.

I'm inspired... by music, it always changes my mood. If I need to calm down, I'll put on classical music like Frédéric Chopin, which is soothing. I also get inspired by art; I love going to museums. I approach each dress like an oil painting, it's a blank canvas. And I love old Hollywood -- the glamor, sensuality and elegance of it.

Three people I wish I could design a dress for: My grandmother, who would appreciate what I do and get it. Grace Kelly, who was one of the most elegant people. And everyone likes to dress celebrities, but it's too hard to pick just one. I do remember years ago I saw Cider House Rules in 1999 and told my sister, "This blonde is the most beautiful girl I've ever seen. I bet she's going to be one of the most famous actresses." It was Charlize Theron. I've wanted to dress her for years, but I was inspired before she became really famous.

On helping others: No one really helped me, so I swore I would always help somebody if they needed it. What I do is different than what somebody else does. If you're going to a fabric place, you're not going to buy the same fabric I do. That's my eye, that's my ability. I have no problem giving resources.

What's next: I'd like to find an investor/partner who understands my passion and vision and the value of an artist. I would do a lower-end line. I would love to bring my brand to the masses.

Biggest misconception: Many people think I have such a glamorous life, and it is so not glamorous. Every dress I make is what is called your first sample. When most business owners manufacture their first sample, it's an experiment -- like a pancake -- you throw out the first one. My pancake is always my best pancake. It has to be right the first time. It's hard work, very competitive, and it can be torturous -- but the result is always worth it.