For Financing and Mentorship, Would You Forgo Future Income?

Rachel Solomon
June 7, 2013 5 min read
Opinions expressed by Entrepreneur contributors are their own.

What if you had the financial freedom to pursue your goals on your terms? Maybe you'd pay off student debt, quit your day job, relocate or all of the above. It may sound like a dream, but a few new funding platforms are in the business of making such dreams a reality.

Upstart and Pave are two increasingly popular services that match college students and recent graduates with seasoned industry professionals who, through financing and mentorship, help them pursue their ambitions -- be it a personal project or business.

Launched in 2012, Palo Alto, Calif.-based Upstart and New York City-based Pave offer their services to students, young professionals and entrepreneurs alike. "I saw a pattern that young entrepreneurs were choosing to accept a practical Plan B with less exciting jobs and not pursuing their ideas and enterprises because of debt," says Upstart co-founder and former Google executive Dave Girouard. "Upstart is the idea of allowing you to retire debt so you can pursue things you want without the financial roadblocks."

Other considerations before jumping on board with alternative-funding services like Pave and Upstart:

1. Prepare to get personal. Like Kickstarter, Pave and Upstart are platforms for telling your story and connecting with people. "I wrote about my debt, which exposes a very personal situation," Spear says of her Upstart profile.

2. Expect to build relationships. Backers join these platforms to fund not only a project, but also an individual. The relationship is more personal than is typical with most lenders.

3. Be aware that you're tied to the contract even if you fail. You can't get released from the Pave and Upstart agreements through bankruptcy. But if your income falls below a certain amount, you are exempt from making payments for that year. With Upstart, each exemption year will extend the term of your contract by one year for a maximum of five years. With Pave, every year of exemption still counts toward the 10-year participation period.

Here's how both Upstart and Pave work: Create a business profile with a funding goal, attract backers, and in return for the funds, pay the backers an agreed-upon percentage of your income for 10 years. What qualifies as income? Both platforms calculate it based on what you report on line 22 of IRS Form 1040, which includes salary, interest, dividends and most types of capital gains.

Meanwhile, the platforms make their money through funding and servicing fees. The fixed cost to the aspiring entrepreneur is a one-time, upfront fee on the funding amount, which is a flat fee of 3 percent with Pave. Upstart will charge up to 3 percent, depending on your state of residence.

For aspiring entrepreneur Trina Spear, this model was the solution to her debt stranglehold. "From a very young age, I knew I wanted to start a business," Spear, 29, says. "But after graduating business school with $169,000 in student loans, my decision-making was handcuffed, and I took a Wall Street job instead."

But thanks to Upstart, Spear raised the $20,000 in funds she needed to quit her job and dedicate herself full time to the Los Angeles-based medical apparel company FIGS that she co-founded in 2012. As an added benefit, one of her backers also invested directly in her business. "This is an exciting movement," she says. "It's not just companies that can issue equity anymore. Now, individuals can too." 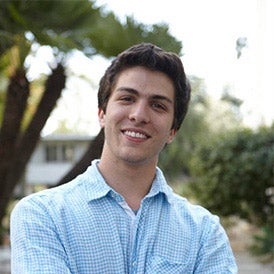 Despite raising just $3,000 from backers on Pave, Ben Levine says the mentorship he's received proved most beneficial to furthering his social venture, KooChooFlee.

Indeed, the mentorship opportunities are what motivated Ben Levine, 21, to join Pave after founding his Claremont, Calif.-based Chilean dessert company KooChooFlee in 2012. "I only sought $3,000, but the value of the mentorship is huge and serves not just KooChooFlee but also my other career ambitions in finance," he says. "One of my backers has a lot of experience in terms of marketing and entrepreneurship with a social consciousness, which fits well with KooChooFlee because I donate 50 percent of profits to preserving the Chilean Patagonia."

Related: 5 Reasons a Young Entrepreneur Should Raise Outside Funding

Despite the apparent benefits of such services, experts say to do your homework before getting swept away. "What I always advise entrepreneurs when they're hunting for capital is to explore every alternative you can and find what you're most comfortable with," says Ami Kassar, founder of Multifunding, a Broad Axe, Pa.-based service that helps small businesses find financing.

While both Upstart and Pave advise what your funding terms should be, it's important to get an objective assessment, says Molly Brogan, vice president of public affairs at the National Small Business Association, a small-business advocacy organization based in Washington, D.C. "Have outside experts or banks look at your projections."

Having run the math, Levine feels very confident with his income-share agreement. "Because I only pledged 0.4 percent of my income, that means I need to make $75,000 over the next 10 years in order to pay back just the principal," Levine explains. "I thought it was a lowball offer and was pleasantly surprised [Pave] took it."

Would you consider using one of these services? Tell us why or why not in the comments section below.

Fuel Shortage Hits Southeast U.S. As Colonial Pipeline Works To Get Back Up

An Overview Of The Current DeFi And NFT Aggregator Space

Wendy’s Needs More Clarity Than an Earnings Report Can Provide