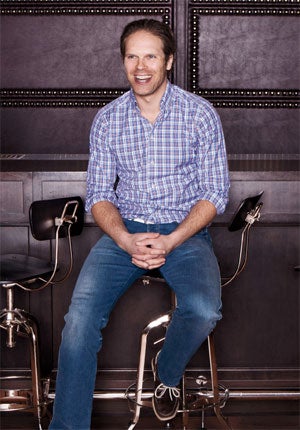 The right fit means everything to Brian Spaly. When the Stanford University MBA student couldn't find trousers that met his exacting standards, he learned to alter clothes himself. Eventually he designed a line of pants and started selling them out of the back of his car, a sartorial sideline that in 2007 blossomed into Bonobos, an online venture renowned for its colorful, tailor-made menswear. But when his partnership with his Bonobos co-founder grew strained, Spaly stepped out of the company and slipped into something more comfortable: In late 2009 he accepted an offer from Menlo Park, Calif.-based investment firm Anthos Capital to become CEO of Trunk Club, which was connecting fashion-frustrated men with personal stylists via Skype and mailing them on-demand cardboard trunks stuffed with designer clothing, outerwear, shoes and accessories, all handpicked based on the customer's individual needs and tastes.

"Anthos came to me and said, 'We can't imagine someone who is better positioned to take over this company than you,'" Spaly recalls. "And I thought, This is a great fit for me."

It may not go through the blink-and-it's-gone whims of women's clothing trends, but the once-monotonous world of menswear is experiencing plenty of innovation. Here's a look at some companies that are revolutionizing a key sector of the U.S. apparel business, from refining domestic manufacturing processes to enhancing the shopping experience for consumers.

It wasn't yet the perfect fit, however. So Spaly ditched Trunk Club's Skype format in favor of e-mail and phone interaction, as well as an even greater hands-on approach. After transplanting the firm from Bend, Ore., to downtown Chicago, he opened Trunk Club HQ, a physical site where men can come for one-on-one styling appointments, sidestepping the aggravation of shopping in department stores and malls. Consumers outside of Chicago can still sign up for the service online, creating personal profiles that detail their measurements and fashion preferences. Trunks are delivered as often as a customer wishes; the typical shipment contains six to 10 items from fashion partners like Gant Rugger, Billy Reid, Eton and Jack Spade, with an average price of $150 per item. There are no upfront costs, shipping and returns are free, and most members keep about one-third of the items they receive.

"As more and more men have grown fashionable, it has become harder for guys who are not fashionable to blend in. But I think a lot of guys have a sense of what they look good in, and they just need access to it," says Spaly, a lean, scruffily handsome Michigan native clad in a pistachio-green button-down shirt and designer jeans direct from the Trunk Club catalog. "The apparel business is an area where there's a lot of room for innovation."

In 2011 Trunk Club closed an $11 million Series A financing round led by U.S. Venture Partners. Now more than 25,000 men have joined the service, most of them professionals ages 25 to 50 with annual income north of six figures. At the company's current rate of growth, membership should reach 50,000 this year, with sales on pace to reach $45 million, which would vault the firm to profitability.

The larger Trunk Club gets, the better it fits Spaly's entrepreneurial ambitions. "It's not outrageous to think that one day we'll have a million customers. At that stage, you're moving the dial for almost 1 percent of the male population," he says. "There's a lot of room to unseat the entrenched competitors like Men's Wearhouse, J.Crew, Brooks Brothers and Ralph Lauren. Those are the big sellers of men's clothes, and we want to take all of their customers. I hope that one day--maybe it's 20 years from now--people will look back and say: 'That company changed the way Americans look.'" 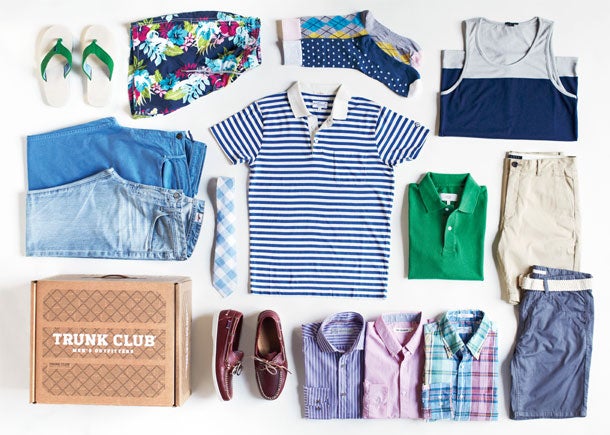 Out of the box: Trunk Club delivers handpicked designer clothing, shoes and accessories.

Spaly started his career in finance, not fashion. After graduating from Princeton University in 2000, he moved to San Francisco to take a job with financial services firm Bain & Company. "Around that time we went through a metrosexual revolution in this country," he recalls. "That seminal article was written in The New York Times that coined the word metrosexual, and what that meant for someone like me was that people were starting to recognize that guys in their 20s were caring more about how they looked after the grunge era of the 1990s, where everything was too big--all Kurt Cobain flannels. But where does a guy go to get great clothes? There was a void."

By the time Spaly entered Stanford in 2005, the movement was reaching critical mass. But he still struggled to find clothes he liked, a problem compounded by his distaste for shopping. Those frustrations--combined with the growth of digital commerce and his interest in exploring the entrepreneurial philosophies shaping his MBA studies--inspired Spaly and then-roommate Andy Dunn to launch Bonobos, a direct-to-consumer web brand specializing in trousers in a range of colors and styles.

"Guys don't like shopping, so of course we weren't going to go through stores," Spaly says. "The reason [Bonobos] never wanted to sell through retailers is because retailers kinda suck. Their buyers are fickle and far more fashion-forward than the average customer. I don't think they really know who their customer is. They're supposed to, but I think they do a better job buying for their own interests, vs. what a linebacker from high school who's now a banker in Chicago actually wears. That's the guy we're dressing."

Backed by $50,000 from Spaly, $30,000 from Dunn and $750,000 from angel investors, Bonobos grew 23 percent month over month during its first year in business and generated revenue of $1.8 million in 2008 and almost $5 million the following year. But as Bonobos grew, so did tensions between Spaly and Dunn. 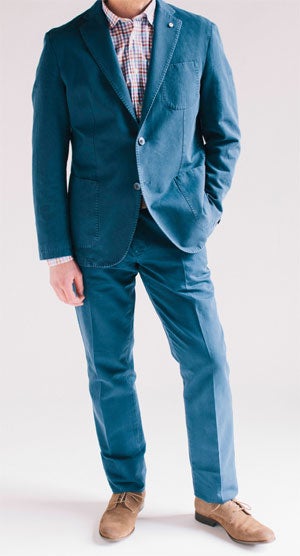 "Andy sent me an e-mail that said, 'I'm not sure our partnership is working all that well. Maybe one of us should move on. If you want to stay, I'll go, and if you want to go, I'll stay, but I don't think it makes sense to do this together.' It was a really thoughtful e-mail, and it sparked a conversation about whether we were meant to be co-leaders of the business going forward," Spaly explains. "We talked about it and decided I would be the one to go. It was a pretty easy decision once we realized that's what we needed to do. It wasn't a nasty process, and I'm proud of both of us." (Bonobos is now a Trunk Club wholesaler. "We're big fans of the brand, and we have a great relationship with them," Spaly says.)

Not long after Spaly left Bonobos, Anthos Capital paid an undisclosed sum to acquire Trunk Club from founder Joanna Van Vleck, who exited. Spaly was the first, last and only candidate for the top spot, says Anthos managing partner and co-founder Bryan Kelly. In fact, the firm finalized the Trunk Club deal contingent on Spaly coming in as CEO.

"Brian is an amazingly talented entrepreneur and leader who is also passionate about fashion. The overlap of all those things made him the perfect choice," Kelly says. "He's somebody who gets the ethos of the customer--what they need at a core level and how to provide that service. Trunk Club revenues are up more than 100 times since we invested, and I'm confident it will be a major retail company that is highly disruptive to the bricks-and-mortar model."

Trunk Club HQ stretches across three floors of a brick-and-timber loft space originally constructed in 1896 on the edge of Chicago's River North district; it's walking distance from the historic Merchandise Mart, once the nexus of the wholesale goods business. Spaly looked at dozens of potential sites in downtown Chicago before finding this spot, which is not only aesthetically and geographically appealing but also large enough to contain 160-plus employees, 15 dedicated styling areas, an array of merchandise, a 5,000-square-foot rooftop deck and the pièce de résistance: a 40-foot-long bar stocked with draft beers, premium wines and craft liquors from sponsor partners such as the venerable Italian brewery Peroni.

"I have a belief that ugly, gray cubicles, carpet, fluorescent lights and drop ceilings--all the accoutrements of your typical office space--suck the life out of you," Spaly says. "We care a lot about how our space looks. We care a lot about making customers feel excited and energized by being here. It doesn't look anything like any other company, and that's what we're striving for."

Only about 20 percent of Trunk Club customer interactions unfold on-site, however. The overwhelming majority of members live outside of Chicago, mostly in communities where access to contemporary men's fashion is slim to none. All customers are paired with individual stylists, who are encouraged to foster those personal relationships; for example, by including a handwritten thank-you note in each trunk.

The potential for capturing fashion-conscious clients outside of metropolitan areas represents Trunk Club's greatest threat to the retail status quo. "Trunk Club are pioneers. They invented this space. They took the concept of the Saks Fifth Avenue personal shopper and moved it online," says Bernie Yoo, co-founder of New York City-based Bombfell, which offers similar personal-stylist subscription services but targets less affluent males. "They've built a great business online that's similar to what is being done off-line. It's one-on-one, high-touch and interactive."

The biggest challenge facing Trunk Club is what happens if and when those off-line incumbents--or even established e-commerce giants--move into the virtual stylist space, Spaly admits. But he's confident that Trunk Club's commitment to delivering a customer experience tailored expressly for the collective male psyche will never go out of fashion.

"Everybody in this world of innovative apparel and retail startups is talking about how to be relevant and exciting for customers in a world where the perfection and ease of online commerce will ultimately dominate most purchases. Where will you go and still pay a premium for a different kind of experience? That's the only way we can compete long-term with an Amazon or a Nordstrom if they come into our space," Spaly says. "For us, it's about using technology to make the experience super-simple.

You can text your stylist 'trunk me' or 'send trunk,' and we know exactly what you mean. That's the heart of where we're innovating."

5 Things to Consider as You Scale a D2C Business