Denver has been hovering in Boulder's startup-scene shadow, but the "little sister" city has been drawing its own star power of late.

"It feels like it's in the new frontier of the entrepreneurial hot spots," says Chris Myers, co-founder of BodeTree, a venture-backed startup that provides financial analysis and reporting tools for small businesses. Myers had been living in Phoenix up until recently, when he relocated to join his business partner in Denver. The company's headquarters are located in downtown Denver in a building originally constructed in 1865.

Denver is home to the consumer product innovation company UrgentRx and health-care application iTriage. And according to a recent ranking by the Kauffman foundation, Denver has moved from the 9th most popular startup scene to the 4th from 1990 to 2010. Also, on Monday, the city's second annual Denver Startup Week kicks off. 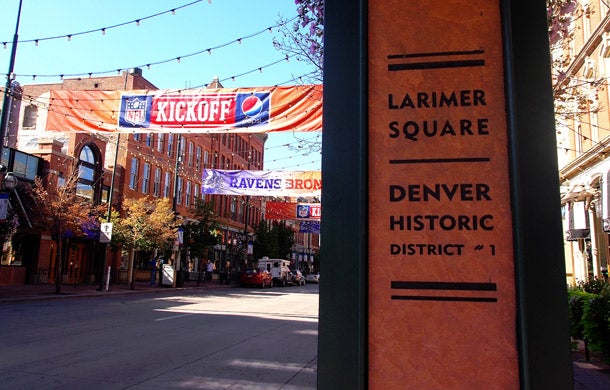 Related: What Makes Silicon Valley Successful? Not What You Think

Here's a look at some of Denver's top selling points.

Quality of life. Part of what makes Denver so popular is the undeniable quality of life benefits that come with living in the foothills of the Rocky Mountains. Biking to work. Hiking on weekends. An hour and ten minute drive to Vail for skiing in the winter.

Fewer distractions for talent. For tech startups in Denver, the less concentrated startup density tends to draw a more committed employee. "When you look at hiring talent and bringing people on, especially for a tech startup, you know, the story has always been, 'It has got to be the Bay, or it has got to be in Flatiron [New York City],' or something like that. And there is great talent there, no question about it. But it is just a different dynamic," says Myers. In The Valley and New York, "you have a lot of people bouncing from one thing to the next to the next to the next."

"Been-there-done-that" sentiment. The laid-back, outdoor oriented, environmentally-friendly culture of Denver is extremely attractive to burned-out, overworked employees. "You get the people who have 'been-there-and-done-that' in the Valley and New York, and they are ready for just a change of pace," says Myers. "You are still getting top notch talent, but you know, you move quickly in those areas, and people want a different pace of life."

Developing entrepreneurship community. "It is getting there," says Myers. And that it is not already there is precisely one of the benefits to being part of it. In Palo Alto or Mountain View, Calif., "there is an established community, which is good and bad. Breaking into that community can be hard. It is like cliques in high school. There is an unspoken set of rules of how to interact and things. I think there are benefits with that, but a lot of times there are drawbacks," says Myers.

Constantly working to position yourself can be distracting. "You are not really focused on the business that you are building, you are focused on how you fit into this ecosystem of startups and VC's and who is cool and who is not and who is growing and who is not," says Myers, who also in the same breath added that he was not disavowing that there are benefits of a developed and sophisticated entrepreneurship community.

Related: Your Playbook to Starting Up On the Cheap: 10 Steps to Launch for Less Than $1,500 (Infographic)

Launching a startup in the bucolic greens of Denver does come with some handicaps, too. Here is a look at some of the negatives:

It can be harder to get money than if you were on a coast. BodeTree closed a $1.4 million round of venture capital in April with a couple of Denver-based VCs, but it's harder to prove your chops to venture capitalists and investors in New York and San Francisco from the middle of the country. "When you are talking to them and you are giving them your pitch and you are telling them your story, invariably it always comes up, 'Oh so you are not in The Valley? Oh, so we don't really invest in businesses outside of The Valley,'" says Myers. "Now, a good idea will always get funded. But you don't have that same face-to-face, 'Hey lets go grab drinks.'"

If your startup builds upon the infrastructure of a tech-giant, it could be hard to be in Denver. "If you are a social app that ties into Facebook, you are going to want to be by Facebook. If you are a real, youth-oriented type of solution, you are going to want to be in those hotspots," says Myers. But if you're startup like BodeTree that caters to a demographic not tied to companies in the Valley or in New York, being in Denver may be a boon, because you are embedded with your customers more directly.

The Denver airport is in the middle of nowhereseville. If you are inking deals on a regular basis, you spend a lot of time in the air. The Denver airport is not conveniently located to the center of town, says Myers. "It is about a million miles away from the downtown," says Myers. It's actually about 30 miles. But once you hit the exit for the airport, you have to go another nine miles to get to the airport. "I have no idea why they put it out there."

Related: Serial Inventor Behind UrgentRx Proves Where There's a Will, There's Room on the Shelf