By Andrea Huspeni August 8, 2013
Opinions expressed by Entrepreneur contributors are their own.

"Our goal at Zynga is to give players the opportunity to play the most fun and social games on mobile and the web," the company stated in a Monday blog post. "With this goal in mind, we have decided to close OMGPOP.com to make way for new and exciting gaming opportunities."

So for the approximate 30,000 users that have wasted countless hours playing OMGPOP games Cupcake Corner, Gem Rush, Pool World Champ and Snoops games, they will have to find another time-sucking app.

Related: 10 Questions to Ask When Hiring a Mobile App Developer

While Zynga does plan to hold onto OMGPOP's most popular game Draw Something and its offspring Draw Something 2 and Draw My Thing, only time will tell how long they'll last. The monthly active users, or MAU, from OMGPOP's blockbuster Draw Something has seen a 89.7 percent drop in users from April 21, 2012 to August 7, 2013, according to a graph provided to Young Entrepreneur by application analytics company AppData. 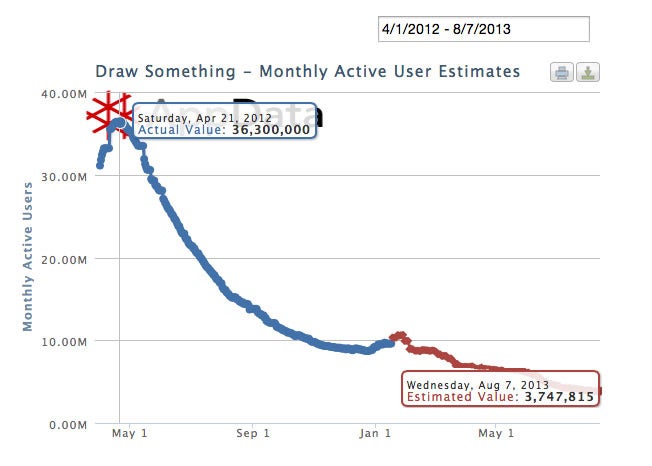 It's hard to blame Zynga for trying to move forward with a leaner model – especially as other games also saw similar drops in users. But, why not sell OMGPOP back to its original owners?

Various OMGPOP employees reportedly approached Zynga in the hopes of buying back any assets including: the site, games and intellectual property. Many team members even offered to work for free if the buy-back occurred. Zynga flat out said no, citing the hassle of legal work and time. The company laid off OMGPOP employees instead.

Now cast as the big bad wolf that stomped out the dreams of a startup, Zynga faces a two potential headwinds: one) possible pushback from customers who actually liked the games Zynga is shutting down and two) future acquisition targets may not look too kindly on a buyout offer from Zynga in the future.

Still, from a business perspective, it would seem that Zynga did what it had to do. If the game-maker returned OMGPOP to its original owners, it might have ended up with a new competitor. Yet with all of OMG's former workers now unemployed, maybe they still will?

Think Zynga was wrong or right for shuttering OMGPOP? Let us know with a comment.