By John Phillips and Matt Clinch November 18, 2013
This story originally appeared on CNBC

Bitcoin touched a fresh all-time high on Monday as the digital currency continued to gain favor with investors.

The virtual currency rose to just under $619 on Mt. Gox exchange Monday afternoon in Asia, up by over 25 percent from the same time on Sunday.

Its latest gains come as the potential for regulation hangs over the market. The U.S. Senate Committee on Homeland Security and Governmental Affairs (HSGAC) is set to begin a hearing at 3.00 p.m. Washington time on Monday. The event will bring representatives from different federal agencies and representatives from the bitcoin community to discuss virtual currencies.

Ahead of the hearing, entitled "Beyond Silk Road: Potential Risks, Threats, and Promises of Virtual Currencies", several government agencies wrote to Committee outlining their views on the currency. Federal Reserve Chairman Ben Bernanke stated that the bank had no plans to regulate bitcoin.

"Although the Federal Reserve generally monitors developments in virtual currencies and other payments system innovations, it does not necessarily have authority to directly supervise or regulate these innovations or the entities that provide them to the market," Bernanke said in a letter.

The fresh hearings come after the Department for Homeland Security (DHS) was sent a letter from the committee that oversees the DHS in August asking for any information, plans or strategies on how it currently or plans to treat virtual currencies, including bitcoin.

Another Senate Committee on Banking, Housing and Urban Affairs will also hold a bitcoin hearing on Tuesday 19 November.

"I myself and many in the industry are actually in support of government regulation in this field," Lee said. "We want to work with the government proactively to recommend the right regulation approach for Bitcoin and Bitcoin companies."

"At the most basic level, government should try to clarify the necessary licenses for operating Bitcoin exchanges," he added.

One potential reason behind the recent rally is the expectation of sympathetic comments towards bitcoin at Monday's hearing.

The closure of Silk Road in October, the online marketplace that allegedly allowed more than a billion dollars of illegal drugs and illicit services to be bought using the virtual currency, is cited as another major driver. The move has boosted hopes that bitcoin is fast becoming a credible currency alternative.

"Asia is known for being an area where people emphasize savings, so when Asia moves it's big regardless of whether it's real estate, gold, stocks or bitcoin. I think that's what we're seeing right now," he said.

Zennon Kapron, managing director of research firm Kapron Asia, agreed: "The current run-up in price that we're seeing is due to increasing awareness and understanding of bitcoin both inside China and out."

"Anecdotally, in the past week, I've had a number of both professional and personal friends who had never heard of bitcoin before, come to me, ask how it works and what we think all because they read an article or saw a news segment," he said.

"As they start to understand bitcoin and see its potential in the future, they want to be part of that, which is driving up demand. You could think of it as the next segment of the adoption curve coming online," Kapron added.

Another factor at play could be BTC China's announcement Monday that it received $5 million in Series-A financing – the first round of financing undergone for a new business venture after seed capital – from institutional investors Lightspeed China Partners and Lightspeed Venture Partners.

BTC China's Lee said the exchange saw a dramatic increase in volume following the announcement, as investments of this nature further underscore bitcoin's status as a legitimate investment option. 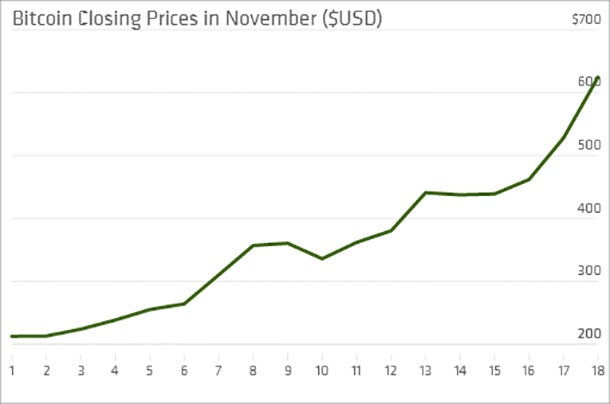 Bitcoin is a virtual currency that allows users to exchange online credits for goods and services. While there is no central bank that issues them, bitcoins can be created online by using a computer to complete difficult tasks, a process known as mining.

Bitcoin has appreciated rapidly over the past year; as of Monday, the value has increased more than 50-fold from $11.00 in mid-November 2012.

While it's hard to say whether or not the recent rise in bitcoin is overdone, some seemed optimistic that this is just the beginning.

"The bitcoin price rally has hardly even begun," said Roger Ver, director of business development at BitInstant, a service that provides fund transfers between and into bitcoin exchanges.

"Because the price is set where the supply meets demand, the price per bitcoin will need to increase substantially to accommodate additional demand," following the recent increase in interest, he said.

BTC China's Lee also noted that while no one can pinpoint where the price will go, the recent rise reflects added pressure to the supply-demand curve.