Despite her heroism, Malala is still young. And so there is Shiza by her side.

Shiza Shahid has taken on the job of harnessing the energy, attention, compassion and celebrity amassed behind Malala, now 16, into a movement that creates change.  As founder and CEO of the Malala Fund, this poised 24-year-old is determined to build a lasting organization that helps women around the world get access to education. And she's learning a lot along the way.

From Stanford to the Swat Valley

Shahid was born and raised in Islamabad, the capital city of Pakistan, and began her life of activism at a very early age. As a teen, she spent time working with children born to women in prison and volunteered at a relief camp in the wake of a devastating earthquake in 2005. Shahid received a scholarship to Stanford University at 18 and moved to California for the next four years, but she never stopped reading about her home country, particularly the issues facing its women. 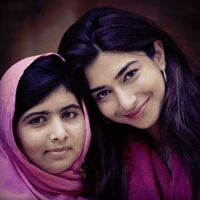 Violence in the region increased. Shahid, then a sophomore at Stanford, remembers sleeping with her phone ringer on loud. A bomb blew up the hotel where Shahid's sister was married. The Pakistan she called home had rapidly begun to crumble.

"When I grew up in Pakistan it was pretty safe; I used to cycle outside," she says. The rise of violence pained her. "I felt like home was being robbed from me. It was a very, very broken place."

Related: From Gum to the Grammys: How Artist-Entrepreneur Kenna Bulldozed the Status Quo

It was around that time that Shahid watched a New York Times documentary about Malala, a then 11-year-old girl who had been secretly blogging for the BBC about her day-to-day struggle to get an education in Pakistan.

Touched by her own fortune and access to an elite education, Shahid reached out to Malala, asking what she could do to help. Shahid ended up organizing a camp that summer in Islamabad, about three hours south of the Swat Valley, for Malala and 26 other young girls. The camp aimed to empower them to be effective activists and entrepreneurs.

It was only a few years later in 2012 when Malala, sitting on a school bus, was hunted down and shot in the face by a member of the Taliban.

Shahid, who was working as an analyst at McKinsey & Co. in Dubai at the time, flew to the hospital in England where Malala was transferred. In the first few days after the shooting, nobody was sure if Malala would survive. But she did. And when she became physically stable, she committed herself to pushing forward with her cause.

Shahid stepped into a leadership position, managing the media blitz and growing global interest in Malala and her story. Realizing the potential catalyst Malala's story could be for the movement to educate girls, Malala's family and Shahid came up with the idea to establish a fund.

Initially, Shahid did not think she would be at the helm, but Malala pushed for it. "A lot of people are surprised because Malala could have a 60-year-old who has run 10 foundations build her foundation. But her decision was that she wanted me to do this and that she wanted this organization to be young and nimble and entrepreneurial and cross functional and innovative and insightful," says Shahid.

Malala was shot in October of 2012 and it was April of 2013 before Shahid was convinced that she was the right person for the job.

Shahid had set up the summer camp for Malala and created programs in the prisons where she had worked as a teenager, but setting up the Malala Fund was a mission bigger than any other. Shahid considers herself an entrepreneur, and says building the Malala Fund has been both a "huge challenge" and "huge opportunity."

Despite her enthusiasm for entrepreneurship, Shahid is not embarking on the challenge alone. She has a cadre of experienced advisors -- her closest mentors are a vice president at Google and a partner at McKinsey. Because of Malala's popularity, the Fund has access to tremendous star power. That said, the Fund has only agreed to be associated with Angelina Jolie and America Ferrera thus far. "That is because they are just wonderful human beings with no ego," says Shahid. And while the nonprofit organization hasn't officially started soliciting funds, it has already received donations from both Jolie and the World Bank.

The Fund, which officially launched in October of 2013, took three months to make its first hire. Shahid says that the Fund will make a handful of hires in 2014, but is taking time to ensure it finds candidates with parallel values and passions. The goal is that when Malala -- who is currently in school in England -- comes to visit, "that it feels like home and a family and like this is a group working together on a joint mission," says Shahid.

Related: Music Mogul Sean 'Diddy' Combs: Why I Care About the Next Generation of Entrepreneurs (Video)

What has been determined -- initially over tea and biscuits in Malala's family's home -- is that the Fund will have three prongs: advocacy, storytelling, and funding of local entrepreneurs in areas where girls don't have access to education. One of Shahid's first tasks was getting Malala's story told in a book, called I Am Malala: The Girl Who Stood Up for Education and Was Shot by the Taliban (Little, Brown and Company, 2013). Also, David Guggenheim, the film director behind An Inconvenient Truth and Waiting for 'Superman,' has been brought on to tell Malala's story in a documentary.

The crux of the Malala Fund's mission, though, is funding and supporting local entrepreneurs who have developed programs to increase educational access for women. The first grants went to girls in Swat Valley who used to work to help their family make money, freeing them up to attend school. Going forward, the Fund's goal is to disperse between eight and 10 investments per year to entrepreneurs working to increase access to education, from Asia to Africa to Latin America.

The mission is lofty, but Malala and Shahid make up for in ambition what they lack in age. "Malala wants every girl to be in school and every girl to be empowered with the skills she needs to have opportunity in her life, to be employed, to not get married at 14 -- and to be a change maker in her community," says Shahid.