By Laura Entis October 13, 2014
Opinions expressed by Entrepreneur contributors are their own.

When seeking a medical diagnosis, it's typically not the best idea to try and find it on the Internet. Regardless of the symptoms searched, the end result is usually some random chat board – hello, Yahoo Answers – where every innocuous itch is interpreted as evidence of something sinister.

Bottom line: Don't try to diagnose your illnesses over the Internet.

At least, that was the bottom line. Google may be changing the conventional wisdom at play here.

That's because the Mountain View, Calif.-based company is piloting a new feature that allows users who lookup health symptoms or conditions on its search engine to video chat directly with a doctor, without leaving the search results page.

The trial run – which was first spotted by Reddit user Jason Houle when looking up knee pain – is currently limited to Massachusetts and California, the Guardian reports. Houle posted a screenshot of the trial program on Reddit. 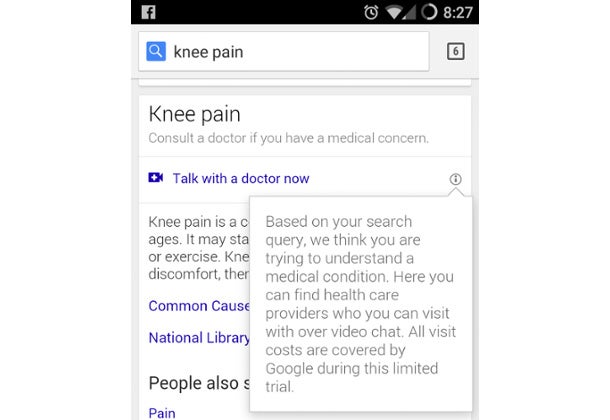 "When you're searching for basic health information – from conditions like insomnia or food poisoning – our goal is provide you with the most helpful information available. We're trying this new feature to see if it's useful to people," a Google spokeswoman confirmed to the Guardian. The trail video chat feature will be part of Google's Helpouts, the platform that allows users to interact with experts in various fields via live video chat.

Related: How Your Smartphone Is Becoming Your Doctor

For now, as Google stipulated in the above screenshot, visit costs will be covered by the company. In the future, however, users would theoretically pay for the ability to receive a diagnosis over video chat with a doctor rather than, say, scour Yahoo Answers.

Google's pilot run isn't the first time doctors have connected with patients via video chat. The Palo Alto-based HealthTap, for example, allows users to interface with 60,000-plus board-certified physicians through HD video and text chat.

Ninety-nine dollars a month, however, is a prohibitive price for many Americans. While it remains to be seen where Google will take its pilot program – both in terms of price and ease of use – the service has the potential to enrich our online health experience by discouraging unnecessary doctor's appointments while encouraging necessary ones. Virtual appointments, of course, will always have their limitations, but a speaking with a doctor over video chat about the cause of your knee pain is a probably a safer bet than sifting through online forums for a diagnosis.

Related: If You Could, Would You Want to Live Forever? Google Thinks You Might