Duolingo, the Chart-Topping Language App, Unveils a Platform for Teachers

Duolingo, the free, wildly popular language app, is taking its zero-ad, gamification approach to learning into the classroom today, with the launch of a new platform called Duolingo for Schools.

Launched in 2012, Duolingo offers reading, listening, speaking and writing exercises split into different lessons (“skills”) and levels (if you get a certain number wrong in a given level, you lose a life). Users can compare progress and compete with their friends.

That concept has been applied to the new, free Duolingo for Schools dashboard, which lets teachers track their students' progress in the app, all in one place. Many schools in the U.S. and abroad already use Duolingo to align with their own lesson plans, but the new platform gives them a way to get an instant snapshot of performance – something they lacked before. “One teacher told us that they would have students log into Duolingo on iPads, and then line up against the wall with their iPads, so they could walk by and write down everyone's scores,” said Gina Gotthilf, Duolingo's head of marketing and international development.

Related: Meet Dash and Dot, Robot Toys That Teach Kids How to Code

The platform also gives teachers a deeper look into each student's learning needs. For instance, if a student consistently hesitates before answering a certain type of question, the teacher can quickly see that and determine that the student may need more practice there.

Duolingo says its app stands out from the swarm of ed-tech apps because, from its conception, its focus has been on the user, not on school administrations. "With think that a problem nowadays with education technology is that it's created with the administration in mind, because those are the people who are going to make the decision about whether or not a product is going to be purchased for the school…instead of a product that is catered toward teaching the students." 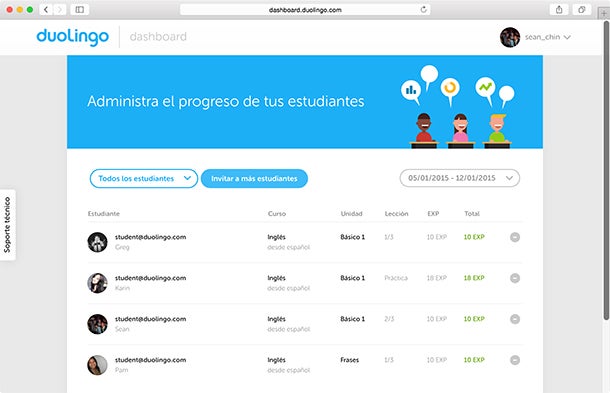 Related: In 2015, Be the Best at Getting Better

Gotthilf attributes the app's success, and its growing base of over 50 million users, to three main reasons: the exhaustive A/B testing that goes into every aspect of the app (from whether to teach verbs or adjectives first, to how many tears Duo, the green owl mascot, should shed over lost lives), the fact that it is 100-percent free and that it's fun. "A lot of teachers have told us that students see it as a reward for their work." The app has also proven to be as effective as a semester-long university language course, according to an independent study conducted by City University of New York and the University of South Carolina last year.

The new platform's availability in U.S. classrooms follows the implementation of Duolingo pilot programs in public schools in Costa Rica and Guatemala, where high-proficiency English teachers are scarce. The governments of those countries reached out seeking ways to use utilize Duolingo to teach English in their public schools, says Gotthilf. Guatemala is also using it to test the English proficiency of their English teachers.

English-speaking app users can choose from French, Dutch, Danish, German, Irish, Italian, Portuguese and Spanish (the most popular with more than 25 million users). The app also offers English instruction for speakers of 18 other languages including Russian, Japanese and Polish.

Related: Saxbys and Drexel Team Up to Promote Entrepreneurship

As for the next languages in the queue, Gotthilf says the goal is to one day offer every language in the world. She says that they have received about roughly 30,000 applications from bilingual contributors around the globe who want to help make up the Duolingo curriculum.  Users can visit incubator.duolingo.com to see when the next courses will be available.

Duolingo is the brainchild of Luis von Ahn, a Guatemalan entrepreneur and MacArthur Foundation Genius Grant winner, who teaches computer science at Carnegie Mellon University in Pittsburgh. The company's CTO and co-founder is Severin Hacker, who began working with von Ahn as a PhD student at CMU.

Related: The 3 Entrepreneurial Traits Kids Should Learn for a Successful Life

Prior to launching Duolingo, von Ahn was part of the teams that developed CAPTCHA (Completely Automated Public Turing test to tell Computers and Humans Apart) – that fuzzy image of a jumble of letters and numbers that you have to fill in to show that you aren’t trying to hack into your own bank account – and then reCAPTCHA technology that's used to digitally archive books and articles. Both technologies were acquired by Google.

Von Ahn was always passionate about education, and Gotthilf says that Duolingo was founded on the basis that "if you give someone an education, it can improve their life." And that in developing countries in particular, there is an [economic] gap that affects who gets what kind of education. "He wanted to find a way to bridge that gap by creating a platform that offers the best, high-quality education for free."

Related: Drop Out Like Zuckerberg? No. Learn to Be an Entrepreneur in School.