The Right Tools for a Successful Crowdfunding Campaign

By Peter Gasca February 2, 2015
Opinions expressed by Entrepreneur contributors are their own.

Last year, the Coolest Cooler became the most successful Kickstarter crowdfunded campaign, raising more than $13 million, surpassing other impressive products such as an innovative smart watch and a massively popular video game console. The wild success of the campaign did not go unnoticed by media, bloggers and tech junkies everywhere.

It was also noticed by Mike D'Agostini and Christopher Engelo, two ambitious entrepreneurs with years of hands-on and do-it-yourself (DIY) experience in everything from construction to computer repair (not to mention facial hair grooming). Because they were regularly working on new and ongoing jobs and projects, their homes and garages were filled with countless tools and gadgets.

The two founders combined their talents and designed a prototype tool box called the "Cool Box" that integrated a mountain of awesome features. A crowdfunding campaign on Indiegogo was recently launched for the project, and it crushed its $50,000 fundraising goal in the first 36 hours. 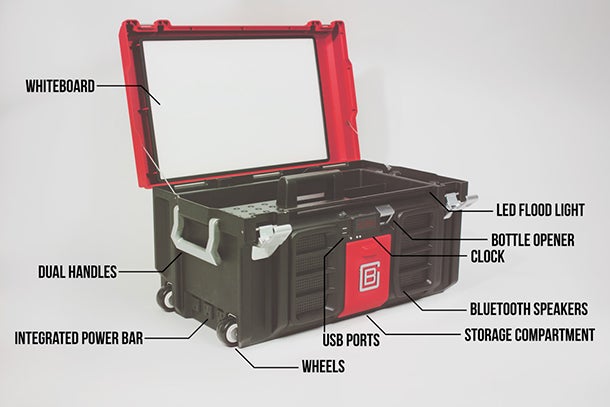 "We definitely took some notes and learned from the best when it came to how the Coolest Cooler innovated the cooler," D'Agostini says. "We were tired of bringing speakers, phone chargers, notepads, lights and a host of other ancillary tools with us to every job, so [the Coolest Cooler] inspired us to create our own all-in-one solution."

The journey was definitely not easy, and the success of their crowdfunding campaign goes beyond riding the curtails of the Coolest Cooler success. The DIY founders shared a few valuable lessons they learned along the way.

Turn over development decisions to your customers.

The idea for the Cool Box came from the founders’ personal experiences working in the field and hauling tools from job to job. While they developed the original concept themselves, D'Agostini and Engelo did extensive research to identify needed features by talking with a host of professionals both in their field and in related fields.

"We spent several days analyzing different projects around the house and days doing research on job sites with other professionals," D'Agostini says. "While doing outside research, we noted a number of things we were leaving out and, more important, a few things we did not need. All of this resulted in the current list that the Coolbox offers. I think entrepreneurs should seek to create solutions to problems, and be completely open to feedback from customers, whether it supports or contradicts what they believe is the right thing to do."

Look within for opportunities and inspiration.

D'Agostini and Engelo had been working as makers in the DIY industry for years when they realized it was prime for a product such as the Coolest Cooler.

"It took examining our own field and experiences to find the inspiration for the Cool Box," D'Agostini says. There is no shortage of tools, gadgets and tech that people use in our industry, but no product combined everything into one easy-to-use product."

Related: The Potato Salad Kickstarter and the Art of Getting Discovered

As DIYers, D'Agostini and Engelo had the resources and capabilities to develop a prototype for the Cool Box. Such a complicated product with so many features, however, is a challenge to launch and scale, since developing a production-ready prototype can be incredibly costly and risky.

"We knew people used the tools and features we included, but we weren’t sure how successful putting them all into one box would be," D'Agostini says. "The feedback from the people we asked was very encouraging, but we knew defining proof of concept would be difficult prior to investing in a larger scale roll out. For this reason, we decided to launch it on a crowdfunding site, which exposed the product to the masses on the Internet, who would provide their feedback through their willingness to buy it. Clearly, we knew within the first day of our campaign that we had a winner."

Set the right expectations before you measure success.

"Many times, entrepreneurship feels as if you are working incredibly hard but not getting anywhere," D'Agostini says. "We put thousands of hours into this business before launched the campaign, not knowing if we would ever make a dime. That was the expectation we had going in, so it made the effort manageable.

"Also, while numbers are very important and easy to measure, daily victories are what will help set the atmosphere for persevering through tough times. These ideas should be included with your company’s vision, but also set by the attitudes and behavior of the founders, who must have the vision for the future while leading the team in the present. Having depth of vision is not always easy, but it is always necessary."

Related: The Creator Behind a Robotic Bartender Spills the Secrets on How to Run a Successful Kickstarter Campaign