Americans Rank This as the No. 1 Skill to Get Ahead in Life

By Laura Entis February 19, 2015
Opinions expressed by Entrepreneur contributors are their own.

We're living in uncertain times. As average yearly incomes stagnate, the economy continues to sputter towards recovery, and we spend more and more time online, it feels natural to worry about the reality today's children will face when they enter adulthood.

So how do we prepare them? What are the necessary skills that will help these kids get ahead in life? Overwhelmingly, as a nation, we believe that first and foremost, it comes down to the ability to communicate effectively.

That's takeaway from a recent Pew Research Center survey, in which a national sample of 3,154 American adults were presented with a list of 10 skills -- communication, logic, reading, teamwork, writing, science, math, athletic, music and art – and were asked to select the ones that they believed are the most important for children to get ahead in the world today. (In other words, they could choose as many as they thought fit that standard; most respondents selected more than one skill as "most important.")

Communication trounced the competition. A whopping 90 percent of respondents cited the skill as "most important," a higher percentage than more tangible skills received, including reading (86 percent), math (79 percent), and science (58 percent).

Here's how all 10 skills stacked up. 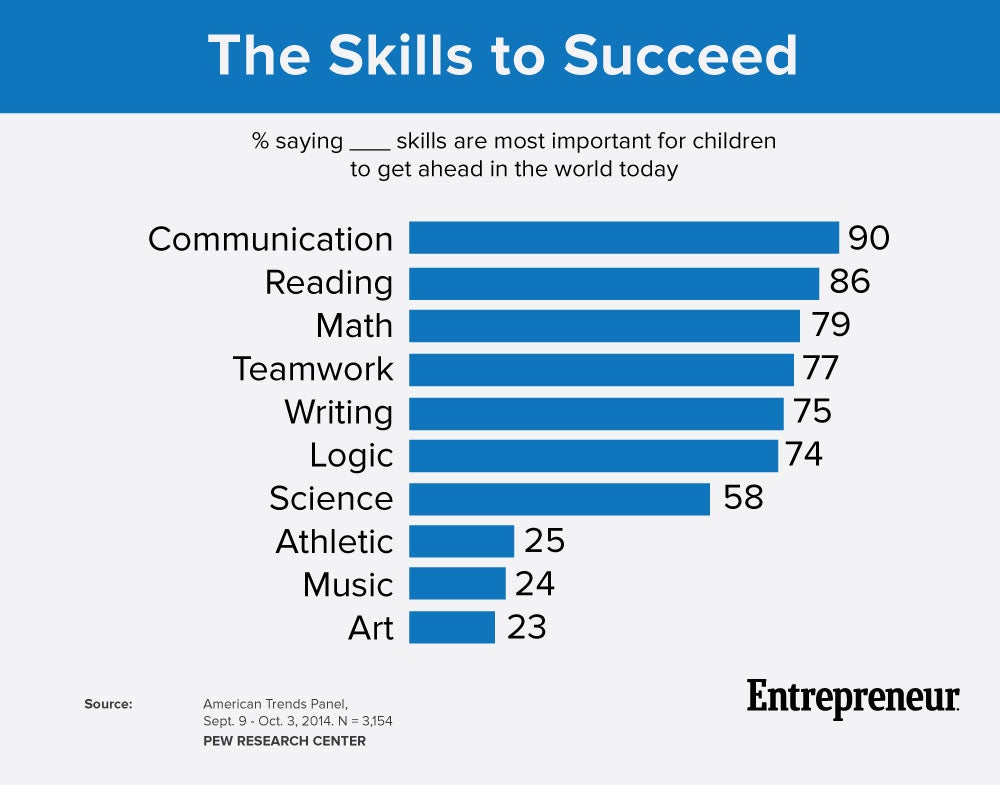 Communication's secure first-place position surprised us, but perhaps it shouldn't have; the survey didn't specify what "getting ahead in the world today" means, exactly. For many, it likely translates to professional success (where communication is undoubtedly important), but it can also mean leading a happy life connected to friends and family (where communication is integral). Perhaps also, there is the fear that today's children, a cohort fluent in 'likes,' lols and emojis, are losing the ability to connect without the crutch of the Internet.

Interestingly, despite the fact that STEM fields typically yield high average salaries (if you're choosing a college major, engineering is a more lucrative bet than architecture or fine arts), science was considered a "most important" skill by only slightly more than half of respondents. Only athletic skills (25 percent), music skills (24 percent) and art skills (23 percent) fared worse.