Who Needs Drones When Amazon Could 3-D Print Your Goods From a Van Parked Outside Your Home?

Amazon CEO Jeff Bezos once predicted that the 3-D printing revolution wouldn’t take off any time soon, only “far, far in the future.” He also said that “you can’t build interesting objects” with 3-D printers. That was two years ago. Today, in a world where we can 3-D print everything from replacement windpipes to entire houses, it looks like he’s changed his mind.

3Dprint.com broke the news this week that Amazon recently filed several patent applications for mobile 3-D printing delivery trucks. The filing hints at a future in which the world’s largest e-tailer quickly prints products on-demand, yes, from a van parked somewhere in the vicinity of the purchaser’s home or office. Suddenly, 30-minute drone delivery doesn’t seem so cool. 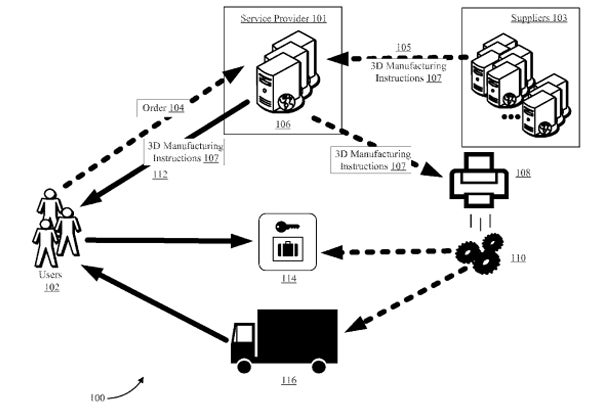 Related: From Eye Shadow to Entire Houses: 7 of the Craziest 3-D Printed Creations Yet

The benefits of adopting an innovative “mobile manufacturing hubs” network would be mainly two-fold for Amazon, as laid out in the patent filing. The proposed system would “decrease the amount of warehouse or inventory storage space needed” and “reduce the amount of time consumed between receiving an order and delivering the item to the customer...” It would also presumably save the Seattle-based company a considerable amount of time and money on several fronts.

The filing marks Amazon’s latest stab at speeding up the shipping process. In 2014, the ecommerce giant won patent approval for “anticipatory delivery,” a scheme that would allow it to funnel items to shipping centers based on shoppers' earlier purchases and searches. Basically, as pointed out in the Wall Street Journal yesterday, “Amazon thinks it knows customers so well it can guess what they’ll need before the customers themselves do.”

In late 2013, Bezos revealed Amazon Prime Air, an ambitious GPS-guided future delivery drone system designed to ferry packages weighing up to 5 pounds and travel within a 10-mile radius. Now that the FAA’s new proposed drone rules threaten to ground Amazon’s drone delivery dreams, perhaps curbside 3-D product printing will have to do, that is if it even becomes a reality. Remember, a patent filing does not a product or service make.

Related: Look Ma, No Hands: Drones You Can Fly With Your Mind

7 Ways to Make the Most of Your Long Commute