Would You Work Out Harder If You Got Paid in Bitcoin?

Breaking a sweat pays physical dividends. Working out on the regular chisels your body, cranks up your immune system and staves off the grim reaper. But what if it paid financial dividends, too? What if you could literally get paid for getting ripped? Would you work out harder?

Sweat equity is taking on new meaning with FitCoin, a new palm-greasing iOS fitness app that Austin, Texas-based Chaotic Moon Studios is pumping up at SXSW this week.

Related: To Stand Out at SXSW, Give Them Something to Tweet About

The clever app, not to be confused with a little-known cryptocurrency and a host of other apps bearing the same name, motivates users to train harder in exchange for bitcoins. It’s beautifully basic: The more they work out, the more digital cash they stash.

"This concept combines two of our specialties: looking good and making money," said Ben Lamm, Chaotic Moon co-founder and CEO. "We're always trying to turn existing habits into new opportunities to make money -- this one was an obvious fit."

On top of leveraging Bitcoin’s blockchain public ledger backbone, FitCoin also latches on to another hot new technology: Wearables. Specifically fitness trackers that measure your heart rate and offer open API software, reports Yahoo Tech. So far, the only trackers to meet both criteria are the Jawbone UP3, Mio Fuse and Austin-based newcomer Atlas.

After being paired with a tracker, FitCoin logs your workout intensity, duration and distance. From there, the app’s proprietary algorithm determines how much bitcoin you’ve earned during each workout session. The sleek black and white animated app also delivers real-time notifications and earnings updates, also displayed on a dashboard, so users can easily track “how both their body and their bank account are progressing.”

But don’t expect to get rich quick, even if FitCoin’s tagline is “Get fit, get rich, or die mining.” Only “slivers” of bitcoins are mined when you exercise.

Also, you’re out of luck if you hope to find FitCoin in the Apple App Store today. It’s still in early alpha release, yet “has already gained traction with enthusiastic users,” according to its creators. They envision FitCoin as a health incentive tool for everyone, not just “cypherpunks and fitness freaks.” 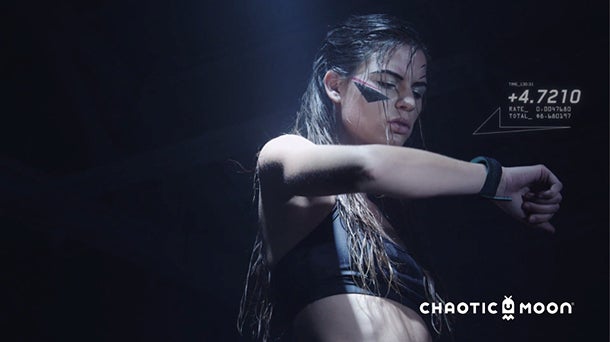 Related: 'Days Felt Like Years': What Morgan Spurlock Found When He Tried to Survive on Bitcoin for a Week

FitCoin's creators say the project is a working proof of concept, therefore its cost and plans for monetization are still up in the air. "Whether it’ll be app or fee-based remains to be determined."

FitCoin is the real-deal, not just another headline-snatching stunt care of the bold creatives at Chaotic Moon. The startup has earned a reputation for testing SXSW organizers’ patience more than once. Last year, the company shocked festival goers when it zapped an intern with 80,000 volts of electricity using a taser-equipped drone. Luckily, the intern wasn’t hurt, perhaps apart from a bruised ego.

This year, Chaotic Moon’s plans to pilot its newest and wackiest drone, Tyrone -- which it says “can tag a wall with spray paint, accost onlookers with silly string or deter attackers with a three-foot flame” -- were foiled by the festival’s new “strict no drones policy.”