Does Virtual Reality Make You Feel Queasy? This Big, Fake Nose Might Help.

If Christopher Walken had a fever for virtual reality, but couldn’t handle the motion sickness that often goes along with it, the only prescription for him wouldn’t be more cowbell. It would be a big, fake nose. Yep, a giant pretend honker.

At least that’s what computer science researchers at Purdue University might say. There, in the hallowed halls of academe, video game design professor David Whittinghill and his cohorts think the answer to virtual reality (VR) motion sickness is as plain as the nose on your face. Their fancy proposed solution to simulator sickness is to slap a simulated schnoz on the screen.

Hello pixelated proboscis, good riddance nausea and vertigo. With a fake nose in the center of their line of sight, motion-sickness sufferers might not feel dizzy and their stomachs might not churn when they delve into the virtual deep with a VR headset lashed to their skulls. It’s that simple.

"It was a stroke of genius," Whittinghill said in a statement announcing his team’s nosy findings. "You are constantly seeing your own nose. You tune it out, but it’s still there, perhaps giving you a frame of reference to help ground you."

This simple feature may be the solution to an ongoing issue with VR. The problem with virtual-reality gaming is that several of your body’s physiological networks -- specifically your somatosensory, vestibular and oculomotor systems --  get thrown out of whack when “the motion of your body and your visual system are out of synch,” Whittinghill states. So basically when you geek out on VR, especially on virtual-roller coasters, your body thinks it’s moving but it’s obviously not. All you need to trick it into thinking it’s in motion is a goofy “nasum virtualis” smack-dab in the middle of the VR screen and you’re golden, or at least you should be.

The Purdue researchers’ findings stem from a study they conducted in which 41 test subjects underwent various VR simulations, including an intense roller coaster ride and a relaxing Tuscan villa tour. 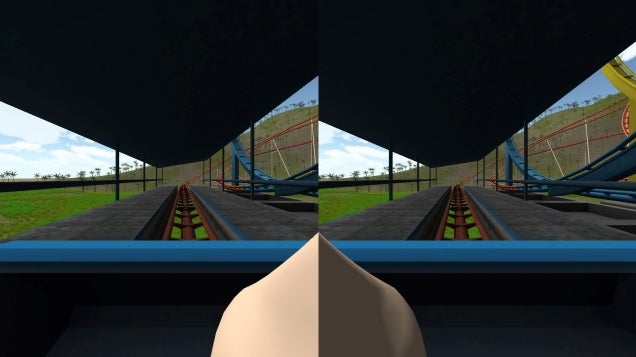 Oddly, the majority of the test subjects, outfitted with electrodermal sensors to measure the onset of sickness, didn’t even notice the added artificial nose on the screen. “Surprisingly, subjects did not notice the nasum virtualis while they were playing the games,” Whittinghill said, “and they were incredulous when its presence was revealed to them later in debriefings.”

Researchers found that the effectiveness of the faux nose depended on the rigorousness of the simulation. Those who took part in the nose-enhanced Tuscan home walk-through played an average of 94.2 seconds longer before feeling woozy, while those who stomached the simulated coaster -- a rocky ride that spins upside down and plunges vertically -- played for 2.2 seconds longer on average.

Whittinghill and his colleagues presented their discovery earlier this month at the recent Game Developers Conference in San Francisco. He said one of his undergraduate students, Bradley Ziegler, thought up the solution. You could say the dude, er, followed his nose...hopefully straight to an A in Whittinghill’s class.