At This Store, the Fitting-Room Mirrors Know All

Laura Entis
November 18, 2015 6 min read
Opinions expressed by Entrepreneur contributors are their own.

It's been an unseasonably warm November in New York City, but Ralph Lauren's Polo flagship store on Fifth Avenue is ready for Christmas. The three-floor building, built to resemble a ski-lodge, is tastefully decorated with white lights, holly and stockings. Upstairs in the “living room” -- complete with a couch, cowhide rug and functional fireplace -- knit dresses, faux-fur lined cuts and pullover sweaters are displayed in artful arrangements.

In one corner, a lanky blonde woman examines a white cashmere turtleneck before placing it back on its hanger. Had she taken the item into one of the dressing rooms, she'd immediately find an image of the turtleneck displayed on the touchscreen mirror in front of her, with options to request a different size, a different color or a pair of jeans to go with it.

The fitting rooms in Ralph Lauren's Polo flagship are smart. Very smart. Equipped with radio-frequency identification technology that tracks items via their tags, the room identifies every item that enters and reflects it back on the mirror that doubles as a touchscreen. Shoppers can interact with the mirror, which functions like a giant tablet, to control the lighting, request alternate items or style advice from a sales associate.

"There's this narrative that ecommerce collects better data – but online, it's black and white. The physical world contains all these shades of grey that are truly interesting," says Healey Cypher, who has built his career around twin concepts, namely that brick-and-mortar shopping isn't going anywhere and the experience is in desperate need of a technological upgrade.

He's working on it. Cypher is the CEO and co-founder of Oak Labs Interactive, the company behind the interactive mirrors, which just announced it has raised $4.1 million in a seed round led by Wing Venture Capital to bring refine the technology and bring it to more retailers.

Like most entrepreneurs, Cypher's goal is ambitious: transform the retail experience in America. "We are on the cusp of a tectonic shift," he says excitedly, running a hand through his well-coiffed hair. Of course, these are early days. But his pitch is persuasive (and passionate) enough that it's easy to imagine a near-future where smart mirrors are installed in fitting rooms across America.

For retailers, the key draw is the wealth of collected data. By tracking each item that enters a dressing room, Ralph Lauren can determine how shoppers are interacting with its clothes. Is a jacket frequently being tried on, but isn't selling? This likely indicates the look is popular, but the fit isn't. Equally valuable: how customers interact with the touchscreen. Are they buying recommended items? How are they interacting with sales associates? Oak Labs analyzes the data and distills it into digestible and actionable insights.

This idea isn't a new one – Nordstrom has experimented with interactive mirrors in its fitting rooms, and designer Rebecca Minkoff's flagship store in New York City has employed nearly identical technology for about a year, to huge results. Since its installation, the store reportedly tripled its clothing sales.

The similarities are no coincidence – Cypher is the former head of eBay's now-shuttered retail innovation team, and he oversaw both launches. When eBay and PayPal split, and Cypher's corporate responsibilities were dialed back -- he clearly harbors some resentment about how events played out – he left to start Oak Labs in April 2015. His co-founders are all former eBay retail innovation executives with past experience at brand-name companies, including Microsoft, Gap and Blackstone.

Despite Healey's enthusiasm for blending on and offline shopping, his tech-enhanced vision of shopping five, 10 years from now is not a given. There are considerable obstacles starting with -- you guessed it -- privacy. It's easy to see shoppers spooked by the mirrors ability to track clothing, and sales' associates' displeasure that the technology enables their employers to track their movements throughout the store. Ralph Lauren, for example, can see how quickly and frequently its associates respond to requests made via the interactive mirror from shoppers.

Just as prohibitive, at least at first, is cost. When asked what one touchable mirror costs to install and run, Healey is uncharacteristically cagey. "It pays for itself," he says, avoiding the question. And while that may be true, as indicated by Rebecca Minkoff's aforementioned sales increase, it suggests that the technology is expensive. All Cypher will say is that it costs him less than $11,000 to make a unit.

Oak Labs, along with its investors, are betting its technology infuses enough value to power over both hurdles. Customers get an added layer of opt-in customization and convenience. Sales associates, who often receive commission, know exactly what a shopper needs and when he or she needs it, tools that can help them close purchases. 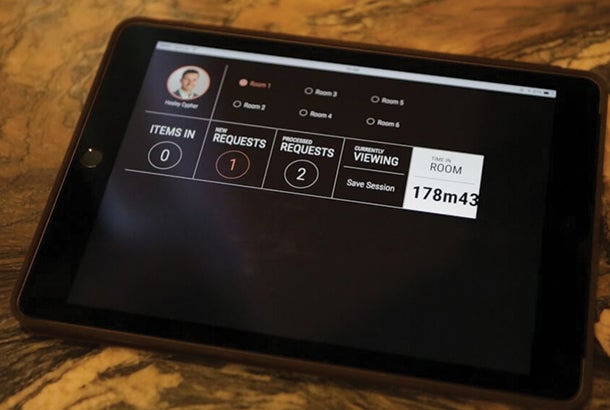 Eventually, as consumers become more comfortable with this type of technology -- read: less freaked out by it -- the level of customization will continue to increase, says Cypher. For the moment, Oak Labs does not track an individual's purchase history. "But you can imagine a universe where you swipe your phone and [the dressing room] knows your favorite writing setting, favorite music, everything you've tried on."

In Cypher's vision of the near-future, if that same blonde shopper was to try on a cashmere turtleneck, the dressing room wouldn't just recognize the item – it would also access her entire purchase history, her lighting preferences and her interactions with previous sales associates along with hundreds of other data points.

Related: Mattress Startup Casper Is Bringing Its One-Model-Fits-All Approach to Pillows and Sheets

How to Overcome the Perfect Storm That Hits Physical Stores

This Is the App That Connects Brands With the Consumer

Business strategies to turn the pandemic around in 2021

4 Key Trends for Retail Entrepreneurs in 2021