Etsy has launched a new feature within its mobile app that guides sellers through the process of shooting, editing and publishing simple videos on their smartphones.

With it, the Brooklyn-based DIY-craft ecommerce site wants its sellers to make more videos showcasing the stories behind their products.

The Shop Videos feature on the Sell on Etsy mobile app officially launches today on iOS and Android phones and tablets. Sellers can also produce and edit videos externally and use the new feature to publish videos on their Etsy pages.

The release of the app comes as American adults are spending more and more time consuming video content online. Year by year, more and more of the video content being consumed is being watched on mobile devices, according to a 2015 report from digital marketing information agency eMarketer.

Etsy has seen 60 percent of traffic coming from mobile, according to a recent quarterly financial report. At the same time, the ecommerce platform acknowledges that not all of its 1.5 million sellers have access to expensive professional recording and editing video equipment. 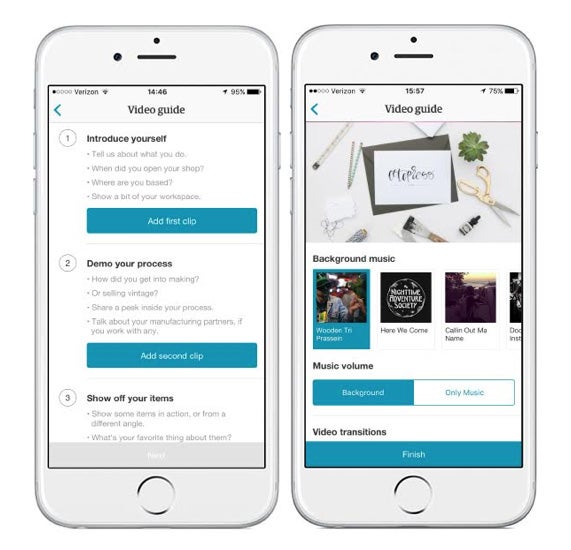 The video editing software walks users through the process of filming short video segments, stitching those clips together and overlaying background music to smooth out the transitions. In a cute nod to the creative community, the available music is written and performed by Etsy employees.

It’s definitely a nice perk for Etsy sellers, but it’s also strategic for the site to get more of its sellers making and producing more videos. Consumers are “more likely to purchase an item when they know something about a shop and the people behind it,” according to the blog post promoting the new video editing feature. The more videos Etsy users create, the more crafts they sell, in theory, and the more money Etsy makes.

Etsy makes 3.5 percent commission on every sale on top of a 20 cent charge per listing. And Etsy sure does need to find a way to pump up revenues. Since going public in early 2015, shares of Etsy have fallen from $30 per share to less than $7.

Hannah Stevenson used the Etsy Shop Videos feature to produce and shoot the video embedded above about her paper doll shop, Lily&Thistle.

Related: 3 Ways to Integrate Video Into Your Marketing Strategy