5 Realistic Ways to Work Less But Get More Done

By Alp Mimaroglu May 10, 2016
Opinions expressed by Entrepreneur contributors are their own.

Five o’clock rolls around, but it’s not quitting time. You’ll be lucky if you get out by six, six-thirty at the earliest. When eight rolls around, you slam your head against the keyboard because you’re still not done.

It’s no shocker that Americans are overworked. 53 percent claim to be overworked and approaching the burnt-out phase (if they’re not already there).

But what if you could do more work in less time, leaving more time for family, hobbies, and sleep? It may sound too good to be true, but science disagrees.

Here are five study-backed methods to be more productive at work that are very realistic and doable.

Roughly two-thirds of Americans have smartphones. While this has made communication far easier, it’s also resulted in a generation for which multitasking is a virtue. Many people believe that multitasking is the most efficient way to do things.

A recent study at Stanford found that not only is multitasking less productive than doing any given task individually, people who claim to be good at multitasking are actually the worst at it. (The study also showed that multitasking contributes to a lower IQ.)

What’s the solution? Intentionality. Rather than trying to do three things at once, focus on each one, give it the time it deserves, and you’ll find that you can get a whole lot more done.

Related: Multitasking Can Damage Your Brain and Career, Studies Say

Meditation has been proven to enhance focus and improve memory. A study at the University of Kentucky found that meditating may actually restore synapses, which helps with not only memory, reasoning, and productivity, but the aging process itself.

3. Don’t allow work to take over your life.

Did you know that the most productive people are those who don’t always focus on work?

Sounds counter-intuitive, right? Yet people who don’t compromise their work-life balance and their hobbies are actually more productive and successful than those who do.

This isn’t that surprising. Plenty of studies have shown that working too much leads to diminishing returns. Just like robots, even the biggest workaholics need to be recharged once in a while. That means setting aside some time for non-work-related pursuits.

4. Know what time of day you work best.

Are you an early bird or a night owl? According to science, the answer matters. And part of it has to do with your body temperature.

How can this help you? Don’t squander your high-productivity periods with meetings or relaxation, save them for nose-to-the-grindstone work.

“Fun.” Sometimes we get so buried in work, we forget that beautiful three-letter word. But we could all use a little more fun.

Studies have shown that having fun (both inside and outside of the office) not only leads to greater productivity and motivation, but better creativity as well.

It goes deeper. People believe more in people who like to have a good time. According to a recent survey, 84 percent of people believe workers with a sense of humor actually do better in the workplace.

Raise your hand if this story sounds familiar. You get back from vacation, and a colleague points out how many holidays people get in that country. Then they brag about how little time off they take by comparison.

Don’t be that person. Instead, go and enjoy life when you get off work today. Not only will you have a blast -- you’ll be better at your job, too. 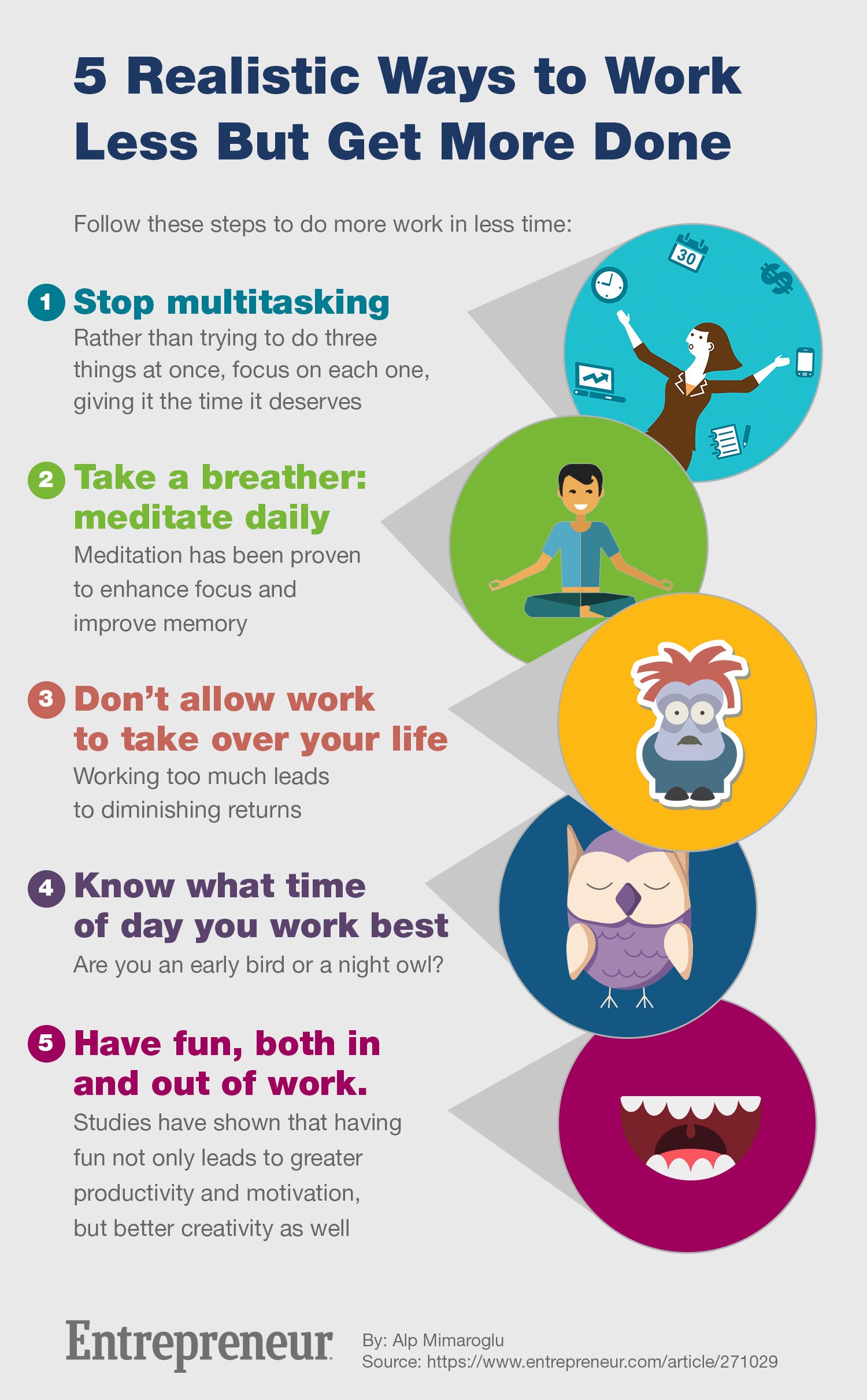 Alp Mimaroglu is a digital marketing team leader who specializes in creating highly effective marketing engines for companies that range from startups to Fortune 500 companies.