5 Science-Backed Ways to Be Happier at Work

Miserable at the office? Try these quick tips from a leading neuroscientist who specializes in studying happiness and what causes all the good feels.

Google “How to be happier” and, before you’re even finished typing, “How to be happier at work” is the first suggestion to pop up. Happiness at work is evidently on a lot of people’s minds, considering that search term's popularity on Google, a company that just so happens to employ a chief happiness officer. (Check out his business card. He’s literally a “Jolly Good Fellow.”)

Why wouldn’t feeling happier at work be at the top of our collective consciousness? After all, most of us spend a third of our days working. Our time on the clock might as well be pleasant and fulfilling.

If it’s not, if you're a sad, sullen downer of a worker -- and your boss could very well be onto this -- studies suggest that you’re significantly more likely to slack off and be less productive. On top of the emotional toll on your own well-being, your blues could also be a costly drain on your company’s bottom line and seriously bum-out those who work around you.

Real-talk time. ARE YOU HAPPY AT WORK? If not, here are 5 tips meant to help https://t.co/P8H0zp6U57 @Entrepreneur

On the upside, a growing body of data-based evidence suggests that being happier at work can make you more engaged, less likely to quit and better at collaborating, among many other benefits. Generally speaking, the happier you are, the better your brain works and the better you feel and perform at work, says Dr. Emiliana Simon-Thomas, a veteran neuroscientist and the science director of the UC Berkeley Greater Good Science Center. 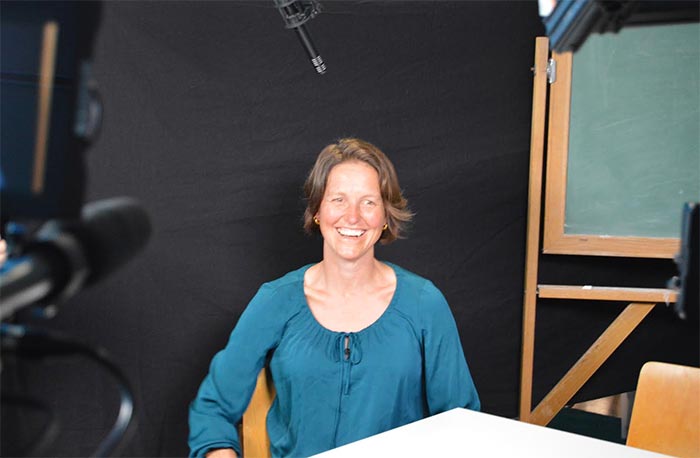 “When workers are happier, they’re healthier and accomplish more,” she says. “They tend to enjoy their relationships at work and elsewhere. They work better on teams. They’re more well-liked by their co-workers and they’re more immune to burnout. So, if I’m an employer, helping them feel happier on my watch isn’t even a hard sell. Putting happiness where the vision and mission are, it’s a given.”

While earning her doctorate in brain cognition and behavior at the university, she focused on how negative states such as fear and aversion influence thinking and decision-making. Now, she mainly studies happiness and the behaviors that bring the feel-good emotion about.

Simon-Thomas is also the co-creator and co-teacher of an eight-week EdX online course titled “The Science of Happiness.” I should mention, in the interest of full disclosure, that I'm currently enrolled in the free class.

I spoke with her recently about her top five tips for being happier at work, for both employers and employees. Here they are:

1. Bring your personal baggage to work.

“The professional culture norm has long been to leave your personal baggage at home. You come in. You do work. We don’t always know if our co-workers are parents. We don’t know if they are caring for others who demand a lot of their time and energy outside of work. We often don’t know much about our co-workers and what they’re personally going through.

"What researchers are realizing is that the separation of professional and personal is a poor model. It minimizes workers in a way that makes it more difficult for them to be happy, to feel valuable, connected, trusted and cared-for at work. It’s time to promote empathy in the workplace, to ask questions and feature opportunities for employees to share their real-life moments. A good starting place is to have off-site play days for your staff, when they can talk about who they really are, what they’re really about and where they really come from. Knowing that information about your co-workers, like if they’re in the midst of a challenging personal situation, which we all go through, can be helpful to understanding where the person is coming from. It promotes compassion and happiness, and it puts money in your company’s bank in terms of trust and social connections."

Bottom line: Getting personal at the office increases co-worker trust and compassion.

2. Stop competing with co-workers. Work is a team sport.

“Work is often framed as being something you earn. Maybe others think you were the lucky one who got a new position, or a raise, or maybe you’re the most qualified one. It’s very competitive and people get jealous and harbor resentment. Workplace competition is counter to cooperation, as it creates a sense of holding on to what’s yours and making sure nobody else intrudes upon your territory.

"In actuality, and empirically-speaking, that mentality is not as productive. It doesn’t lend itself to happiness, nor to the type of achievement that stems from the cooperation of your teammates.

Instead, break down departmental silos. Don’t act like rivals. Help each other. Create a culture of happiness, cooperation and an open idea- and resource-sharing environment. Make it the norm. People naturally work together much better when they’re not pitted against each other.”

3. Take a breather and pause when things get hot.

“Taking a deep breath as often as you can at work, or having some kind of extra awareness of what’s going on in your own psychological milieu, is so important. Engaging in mindful habits, like breathing deeply before meetings or on break or whenever you can fit it in, can reduce the toxic rumination and racing thoughts that often lead to stress and anxiety -- the things that ultimately take our minds off of work and render us less productive.

"Focus on your breath when you’re in a moment of reactivity, when you’re tempted to perhaps yell at someone about something they did that irritates you. Notice the urge, get curious about it, feel the joy of letting go and repeat.

"Instead of being like, ‘Oh, no, I’m not going to scream at that person!’ and then avoiding that feeling and replacing it with something else, perhaps panic, work on your awareness and breathe through it. You don’t have to in a way that is so heavy-handed that you meditate right then and there. Just take that inhale and breathe it out slowly and notice where your urges are. If you have the urge to lash out, consider the possibilities. You probably won’t feel better after and lashing out won’t work at work. Breathing will.”

Bottom line: Stop, think and breathe in the heat of the moment.

4. Express gratitude for the people you work with.

“Gratitude has been proven to present a huge opportunity for increasing happiness. There are lots of opportunities at work to be grateful for the people you work with. It’s up to you to show it, to vocally, explicitly express gratitude to the co-workers and teammates that make your livelihood, progress and daily efforts possible.

"Expressing thanks and showing you’re grateful for them brings about a deep, mutual sense of belonging and cohesion. It also creates empathy and trust in the workplace, which is essential to accomplishing collective work goals together. The giver and the receiver will feel a sense of purpose, a sense of camaraderie and like they matter in the bigger scheme of the enterprise.

"This one especially applies to bosses, who often feel, ‘I don’t have to thank my employees because I’m paying them.’ Thank each other, no matter where you are on the organizational chart. It goes a long way, starting at the top, where leaders can model gratitude, and not with employee-of-the-month programs that can cause animosity. It could be as simple as taking a few seconds to pop your head into someone’s office and saying thank you to them for expending their life-energy to make your business successful.”

5. Play nice with your co-workers and show mutual respect.

“Just be nice, as simple it sounds. It’s one of the most measurably effective things you can do to easily and immediately increase happiness at work. Researchers saw this in a recent nursing industry organizational trust study and intervention. The nurses who took part were burning out and unhappy.

"To the surprise of the researchers, the nurses weren’t burning out because of the long hours and pay and compensation issues. What was really heard loud and clear: There was a culture of incivility that everyone was grappling with -- a habit and culture of being unkind, competitive, snarky and hostile to each other. In working through those systemic causes of unhappiness, and learning to be simply nice to each other, the nurses were eventually able to come to a place of well-being.”

Bottom line: Be kind, don’t be cutthroat and lay off the snark.