When I ask Lyndon Cormack whether he has ever been approached by investors looking to put money into the bag company he started with his older brother, Jamie, he laughs.

“Yeah, you want me to open my phone and see how many approached us today? I mean, we are everywhere,” says Lyndon, 39.

It’s true. Herschel bags are everywhere. If you aren’t aware that you are seeing them, then you probably just don’t know what you are looking for. Being told that Herschel bags “are everywhere” by one of the company's co-founders is the sort of thrown-over-the-shoulder self-confidence that characterized our entire conversation. Lyndon and Jamie are doing well, they know it and they plan to grow their baby into a giant. 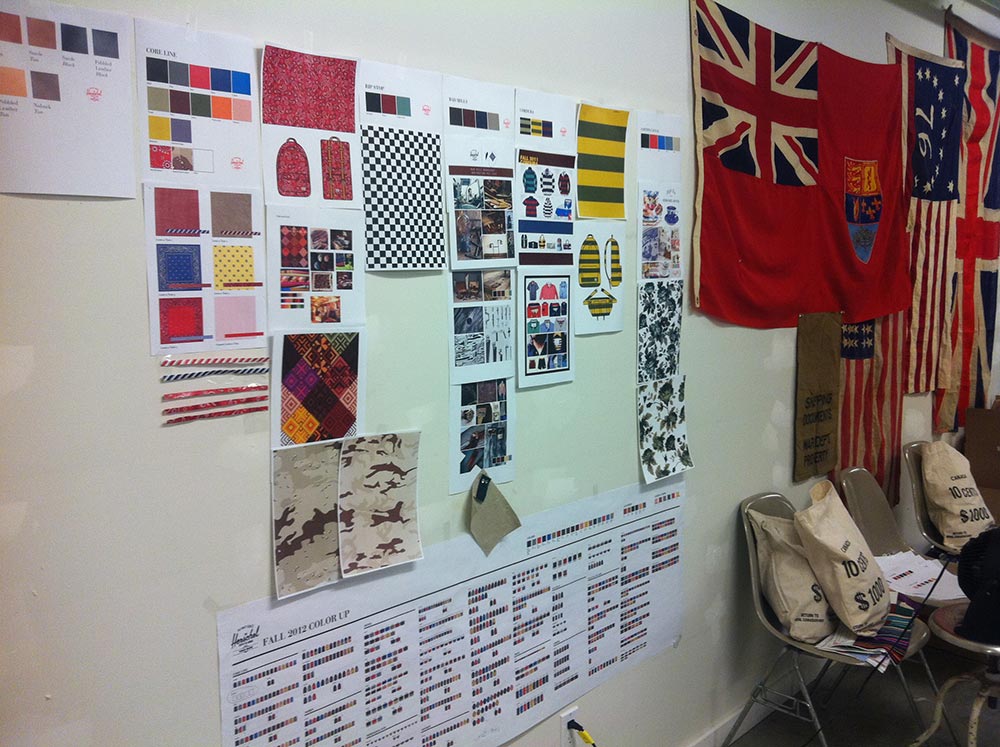 A look at the design process from one of the first bag collections in 2011.
Image credit: Herschel Supply

So far, about 500 investors have approached the Cormack brothers to be part of Herschel, according to Lyndon’s back-of-the-napkin estimates. Investors, from venture capitalists to angels to banks, want in on Herschel's growth.

Zero to 72 countries in six years.

Lyndon and his older brother, Jamie, 41, started working on initial schematics for the first Herschel Supply Company season lookbook in 2009. They had been working in fashion advertising and noticed a gap in the market: bags were either high end and expensive or sporty. They decided to make a line of bags that landed in between. When the brothers showed up at their first trade show in New York with Herschel bags in 2010, retailers bombarded them.

In 2011, Jamie and Lyndon left their jobs to devote their full energy to Herschel, which they named after a teeny-tiny town (population of 30!) in Canada that their relatives immigrated to from Scotland a century ago. The growth hasn’t slowed down. In 2011, the brothers sold 8,000 bags. In 2015, they sold 4.5 million. This year, Herschel, headquartered in Vancouver, is expecting to sell 6 million units in 72 countries.

Related: This Eyewear Startup Was Turned Away by 10 Factories. Two Years Later, Its Frames Will Be in 500 Stores.

The Herschel brand leapt to popularity early on, becoming a darling of the hipster set because of its modern lines of utilitarian backpacks, most hovering under $100. One of its signature backpacks, the "Pop Quiz," costs $74.99. 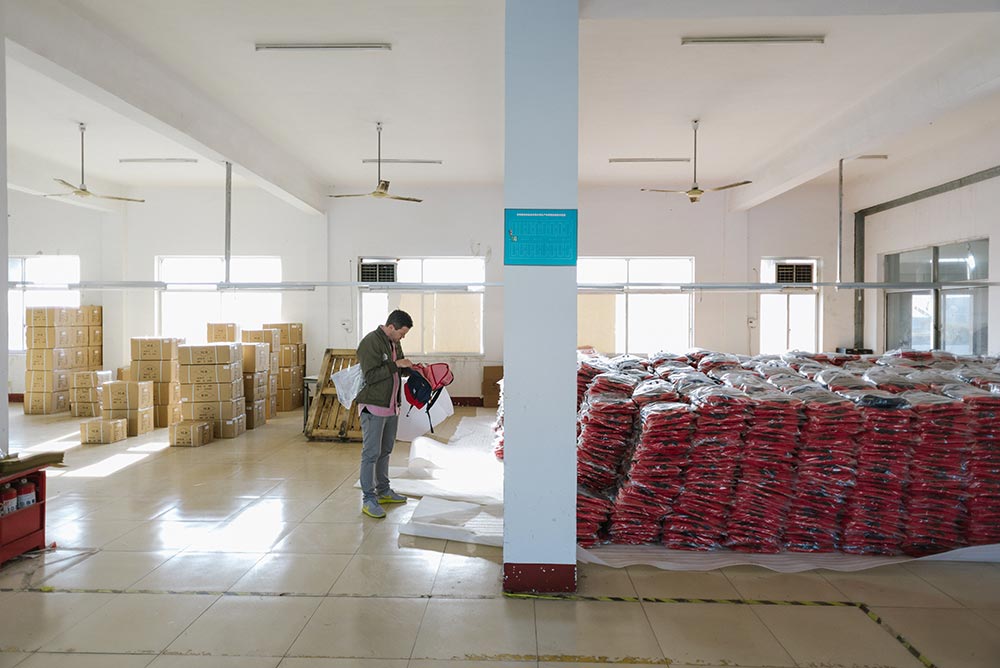 The Canadian brothers hit a sweet spot between design and affordability. “The brand provides great functionality, while combining vintage and contemporary design elements that evoke heritage and current trends simultaneously,” says Mary Brett Whitfield, a senior vice president at Kantar Retail, a global retail research and consulting business, in an email with Entrepreneur. “The seasonal colorways, patterns and collaborations continuously refresh the brand even though the core of the offer relies on a few standard pieces and silhouettes. The line is also priced to be attainable for many shoppers.”

Another key to the turbo-charged growth of Herschel is that it was born as social media was coming of age -- and both brothers have a sales and marketing background. They know how to position a brand in front of an audience.

“The visibility available online makes it easier for niche and specialty brands to develop awareness and an audience that wouldn’t have been possible a decade ago,” Whitfield says. “The company effectively uses social media and digital content such as its Well-Travelled travel/photo blog to create engagement and forge a connection with customers.” 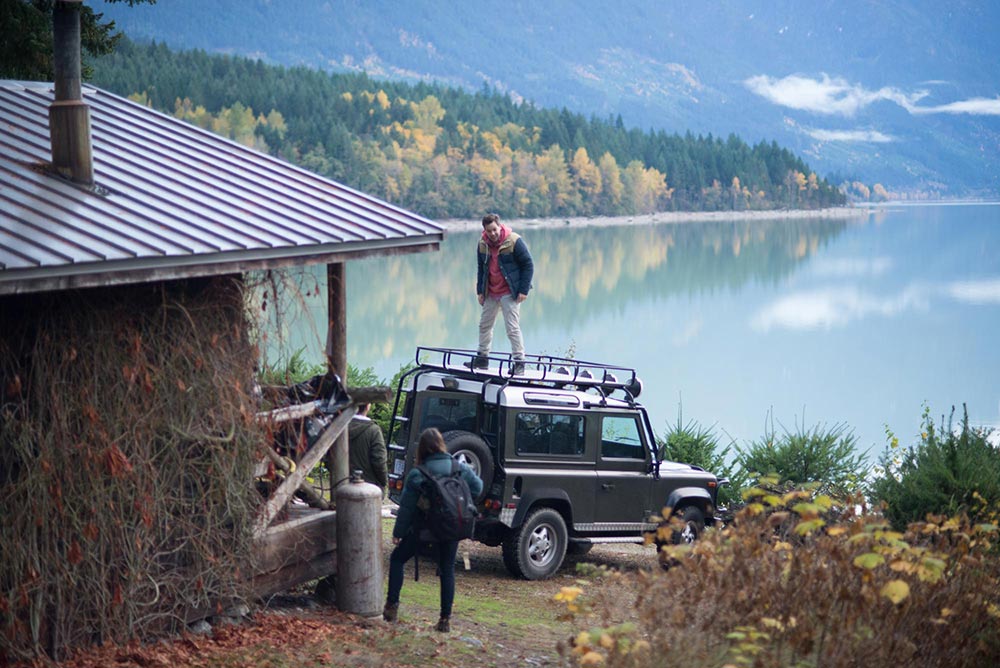 Jamie on location for the Fall 2014 lifestyle shoot in Pemberton, Canada, in October 2013. Jamie has been the Director for every major campaign shoot since Hershel launched.
Image credit: Herschel Supply

Thus far, Herschel has turned down all of its 500 funding suitors -- politely, to be sure. The Cormack brothers have enough business savvy to know that they best not shut any doors too early on. Lyndon, Jamie and their third brother, a silent partner in the business, own 100 percent of Herschel Supply Company.

In a startup world that seems to live and die according to the tides of funding rounds, that’s pretty impressive growth. “We run a great business,” Lyndon says matter-of-factly.  He’s confident in his playful directness. The Cormack brothers reap competitive glee in running Herschel as efficiently and cleanly as they do.

The Cormack brothers didn’t pinch pennies on graphics, marketing, photography or office space in the early days. That means the business has always had a sleek presence. Early on, everyone did everything. For example, designers did both graphic design and product design -- they worked on retail displays, prints for product, silhouette design and the website. Key managers were the first hires, and all of the key department heads have been with Herschel since its launch. In the ultra-expensive areas of shipping and storage, the company hired third-party experts to be sure it was growing wisely.

Before Herschel’s launch, Lyndon and Jamie received a small investment from their third brother. This enabled them to do the research, development and initial prototyping without taking on any outside capital, as well as launch Herschel internationally right off the bat. 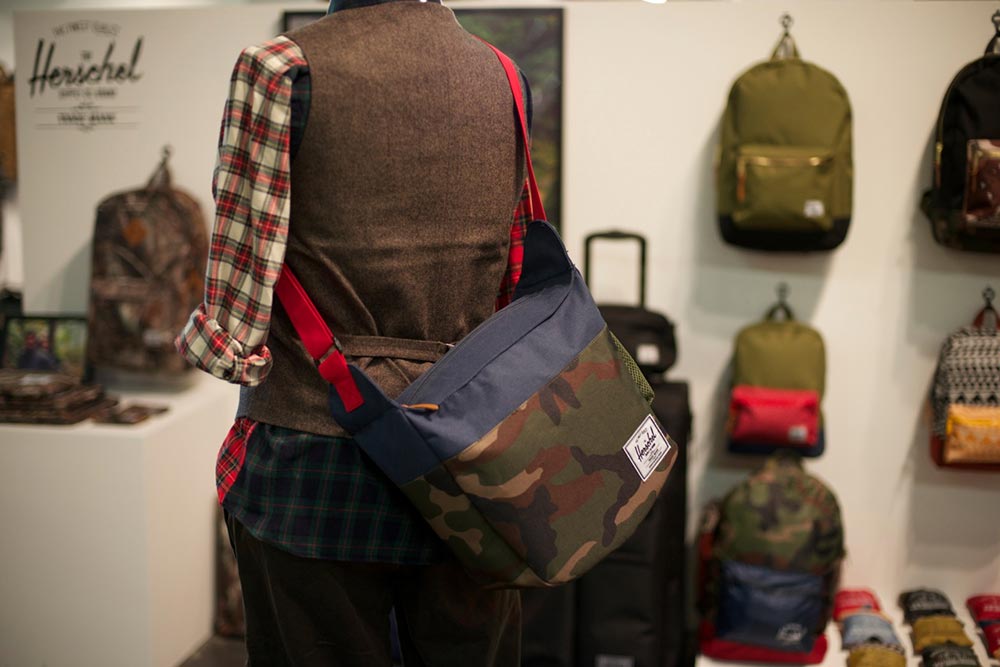 Keeping a hand on the throttle.

Despite their impressive and explosive first years, the Cormack brothers are keeping a tight leash on the company's growth.

While Herschel has been growing exponentially, the Cormack brothers potentially could have accelerated faster if they let themselves rush. “There has been so much opportunity for us to actually do more: more categories, more things, and it is just having that resistance to say, ‘Yes, later,’” Lyndon says.

Jamie insists on waiting to move into new spaces until everything is ready. For example, Herschel didn’t post a single picture on its Instagram page until it accumulated 5,000 followers. 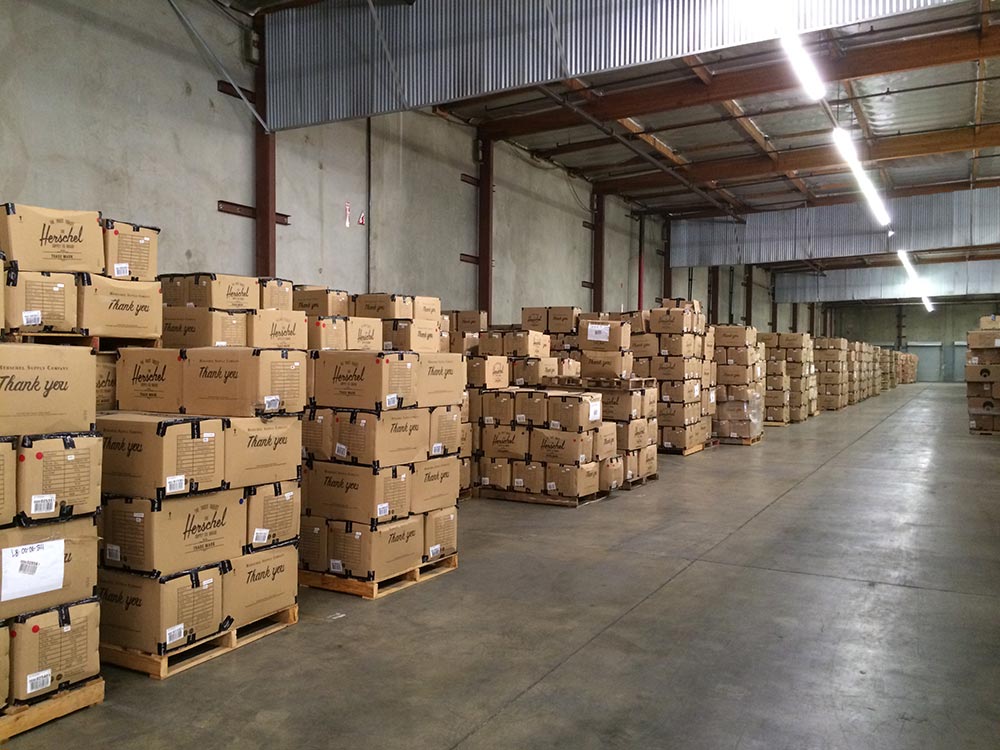 Investing in the “back end” of the business means taking care of the infrastructure and organizational guts of production. When Herschel had only four employees, it already had the same enterprise resource planning software that it uses today. Investing in software systems that can handle significant growth prevents the team from having to take the time to learn new programs and migrate data down the road. Also, Herschel has an in-house prototyping team. That means mistakes get fixed before the plan ever goes out for production samples. When it is time to manufacture, Herschel turns to the same manufacturing partners it has had from the very beginning. Re-upping with new production partners can be expensive in time and money.

By 2020, Herschel expects to multiply revenues by five.

Just because the Cormack brothers are patient doesn’t mean that they aren’t ambitious. By 2020, they want to have multiplied revenues by five, Lyndon says.

To get there, Herschel will not only launch new products, but also likely continue to build on its already robust history of strategic partnerships. Already, Herschel has partnered with Coca-Cola, Stussy, Madewell, Coachella and Disney, to name a few. Additionally, the Canadian retailer has ventured into new, innovative rip-stop fabrics. 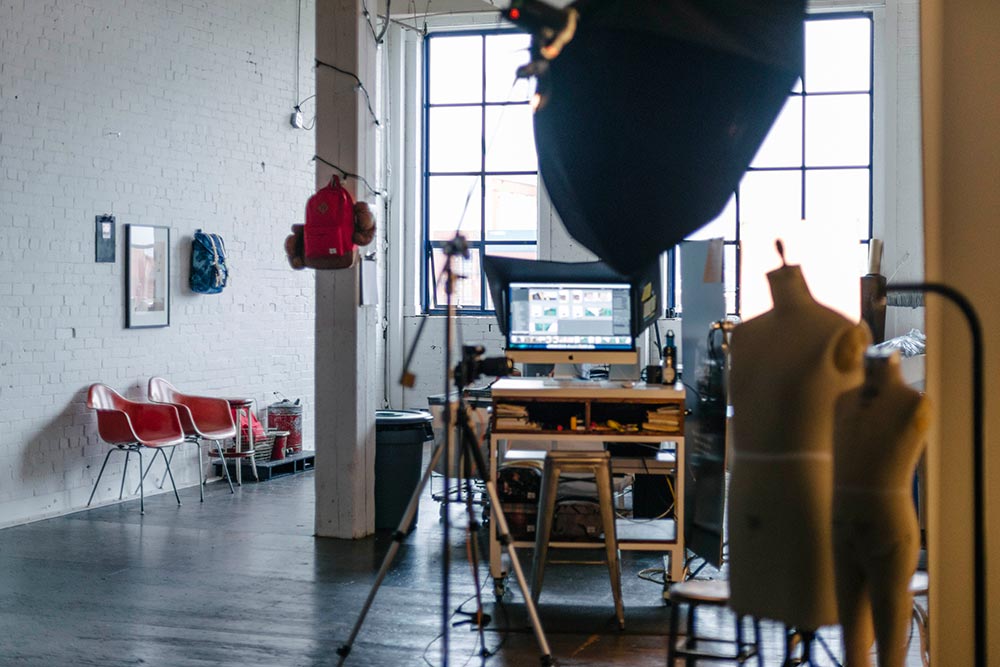 “The current experiments with new fabrications and silhouettes is indication of the brand continuing to evolve," Whitfield says. "I anticipate the collaborations will continue, and the brand is a likely candidate to join other accessories and born online, born as a wholesale business brands with a store presence.”

Herschel has carved out its own niche, but the brothers aren’t without competition. Other utilitarian design-oriented competitors include Chrome Industries, Incase, Tumi, Seagull and Jansport, Whitfield notes.

Herschel is not the first company to gain traction online first and then move through the network of brick-and-mortar retail. “Though its aesthetic is completely different, the trajectory of Vera Bradley -- i.e., a brand with an initial identity closely tied to a founding entrepreneur, sold initially through small, often independent, specialty stores," Whitfield says. "Getting broader distribution in mainstream retailers as awareness grows, while developing its own store network, could provide a blueprint for Herschel Supply’s future.” 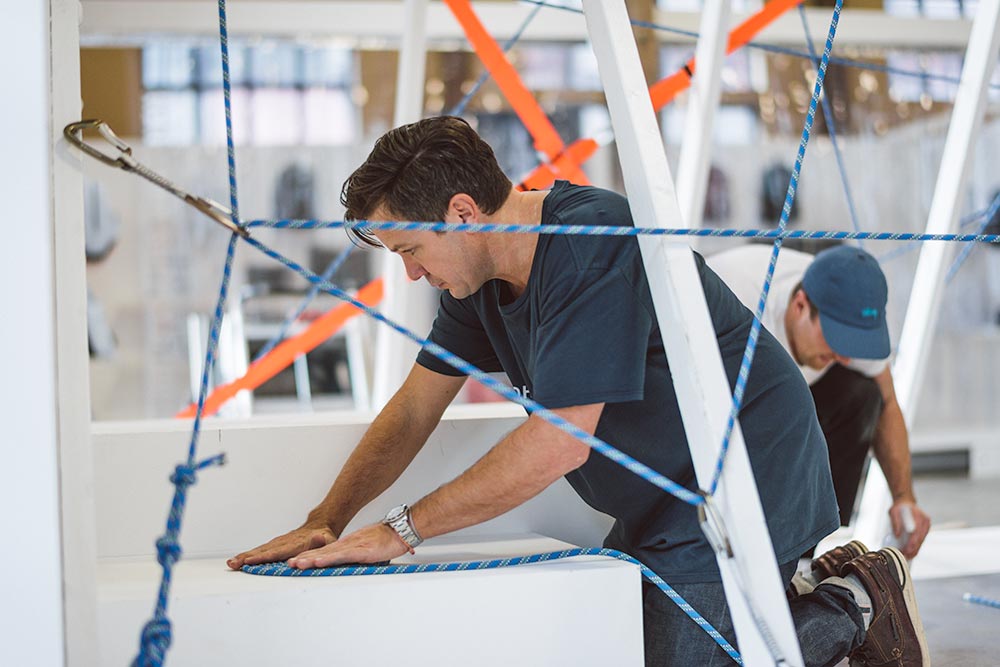 Indeed, Herschel, with 150 employees to date, is on the cusp of opening its own retail stores. It recently hired a director of retail.

“We are both so detail oriented. We both love interior design,” Jamie says. “We want to make sure that we can show up right at retail. We want to be sure we can pull it off properly.”

Eventually, Herschel will move into new product categories beyond bags. But the brothers are waiting until they are fully ready to do so -- properly.

"We are not slow,” Jamie says. “We can move super, super fast -- I think faster than most companies -- but that being said, we want to ensure that we are setting ourselves up for success in that category and make sure that we can make a difference.”