What Should Entrepreneurs Pay Themselves? Start Here.

Jacques Spitzer was having a great run. He’s the founder of Raindrop Marketing, based in San Diego, which scored triple-digit growth in each of the past four years. And yet, the success worried him. The problem: He had no idea what to pay himself. “Believe it or not, growth became frightening, not fun,” Spitzer says. “I was afraid to touch our increasing profits until after each quarter’s taxes were filed.” And even after the paperwork was done, Spitzer and his partner, Adam Wagner, still worried that their own salaries would screw up their company.

So they played it safe, paying themselves the bare minimum to cover their lean lifestyles.

When you start your business, calculating what to pay yourself is simple: Start with your sales and subtract operating expenses and taxes -- and that’s what goes into your wallet. Most entrepreneurs cross their fingers and hope it’s enough to cover the bills. When your business expands, things get trickier. Sure, you could increase your take-home pay right off the top -- and pay the additional taxes that go with it. But what if business drops in the next quarter? Will your company have enough in the bank to cover its obligations?

That’s why I suggest that owners create something called “a variable component to a compensation structure.” Here’s what that means in English: You set up a modest, recurring salary, along with an additional monthly payment based on a percentage of your company’s earnings. But beware: If you don’t have the right business structure, a system like this can still turn your taxes into hell. Be sure to consult with an accountant.

When Spitzer and Wagner sat down with their CPA, the team drew up a plan to cover all their costs. It’s a good one, and can work for almost any entrepreneur. Here it is: 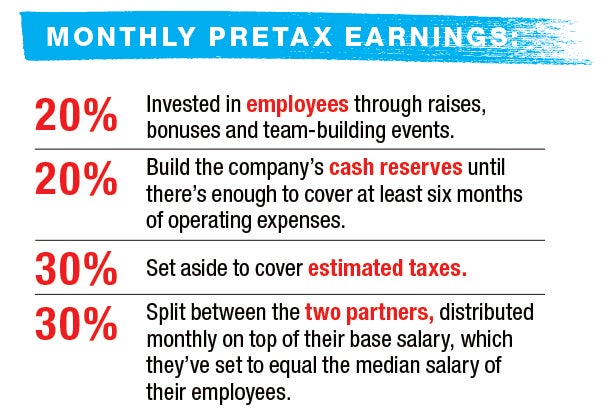 This plan accounts for everything: The cost of doing business, taxes and an uncertain future. The guys also have a plan for any excess funds: After they pay estimated taxes, they pay themselves a midyear bonus. It’s based on the company’s performance to date, as well as a conservative projection for the final two quarters. By doing it midyear, they have time to make any necessary adjustments by year’s end. Now, finally, they’re getting paid for all their hard work -- and have a reason to work even harder.