By Bill Schulz September 6, 2016
Opinions expressed by Entrepreneur contributors are their own.

If Comedy Central’s latest celebrity de-balling taught me anything, it’s that Jean Paul Sartre is only half right: Sure “hell is other people,” but Rob Lowe’s real hell is other people joking about your underage sex tapes and predilection for nanny nookie ad nauseam.

Last Saturday, I attended the B-list bludgeoning that will air on Labor Day. Featured roasters included host David Spade (he co-starred with Lowe in a movie people only remember Chris Farley being in), first ballot HOFer Peyton Manning (oh, it gets weirder), comedian Jeff Ross (finally, someone who makes sense), Not Safe W/ Nikki Glaser's very own (you guessed it!), Nikki Glaser, comic actor and former Marine, Robb Riggle (semper WHY?,) conservative author Ann Coulter (more on that later!) and soulful singer/songwriter, the queen of insult comedy ... Jewel (confused silence).

My behind-the-scenes look at this three-zinged circus provided me with life lessons on how to survive misogynist and downright hateful barbs thrown your way, and how they can actually boost your personal brand. Kinda?

1. Insults are good for you.

For seven years I was the liberal co-host on a late night FOX News panel show, so believe me when I tell you that a regular walloping can be good for the ole wallet. Sure, I’m no longer with said network, (nor is my former, black-eyed, boss) but at the very least, my tense tenure at The Most Powerful Name In News™ continues to garner me an F-load of Twitter followers (even if some of these followers have used the social media platform to wish great harm on my person.)

Point being: A lot of roastees' sinking careers were reprieved due to voluntarily being aggrieved. For every tough-to-watch Chevy Chase or Denis Leary offering, there were plenty more Justin Beibers and David Hasselhoffs who acquired a semblance of public sympathy when their personas needed it the most. Hell, that Donald Trump guy even went on to run for president! But it is the roasters (particularly unknown ones) who can really make a name for themselves.

Amy Schumer was still slumming it on my old show when she made a name for herself by attacking one Mr. Charlie Sheen, as well as a particularly Jackassy guest. Shortly thereafter? Amy Schumer became AMY SCHUMER (while simultaneously not returning my phone calls).

The pre-show aroma emanating from within the soundstage that housed every roaster’s trailer could best be described as “skunky with a side order smell via … the-entire-country-of-Jamaica.” Without naming names (well, I guess I can name SNL-er Pete Davidson who actually lit up on stage) all of the seemingly stoned comics killed it.

Conversely, the producers, agents and plus ones were all more fans of the whiter, more class-A type of narcotics, if my bathroom observations were any indication. Was it weird that I stood around the bathroom making observations? I'm a reporter, people.

3. Win by having thick skin.

I shared a table with Peyton Manning’s lovely wife Ashley. And she really was lovely. Ash always made sure my glasses of Rob Lowe red and white wine were full (yes, they really had vino named after the man of the hour), while I returned the favor by alerting her to whenever a cameraman was near our table so she could prevent him from getting a reaction shot following every pointed Peyton prickling, by hiding behind her girlfriend. And she hid a lot.

As residual damage goes. the people on the stage aren’t the only ones getting flambéed. Friends and family have to deal with the awfulness as well. Poor Ash suffered through at least one University Of Tennessee allegation/joke that I suspect will get edited out of the final product. But all things being equal? The Mannings got off easy.

My one pre-show interaction with Rob Lowe was His Handsomeness telling me: “I hope you and I are going to be able to walk out of this alive.” My initial response was, “huh?” While my second reaction was, “God, you’re even more gorgeous in real life.” With my final realization being that he wasn’t talking to me, but rather to my date … Ann Coulter. 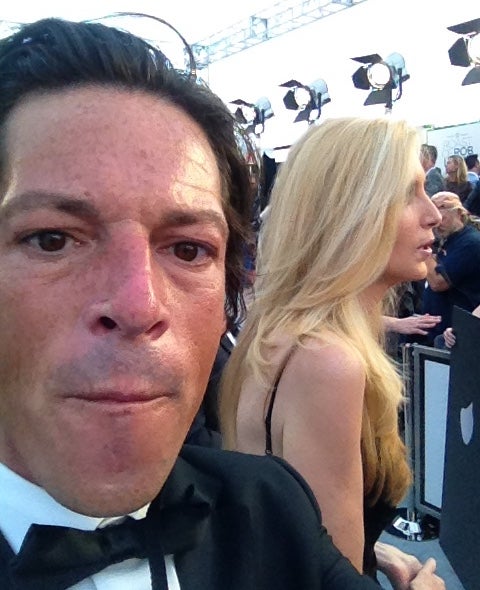 Indeed, the only reason I was there was because one of my friends had to promote her latest vegan-friendly/gluten-free cookbook titled In Trump We Trust: E Pluribus Awesome and kindly asked me to be her luggage carrier/plus-one. Ann had never seen any of the past roasts and I tried to warn her about how brutal they could be. (Lowe inviting Ann ain’t as weird as it seems on paper -- despite the performers prefacing many a barb with “Rob is a lifelong Democrat …” Captain Cutie Pie has been a not-so-closeted Republican for a while now -- a fact that every roaster somehow failed to research. Regardless, Rob should’ve better advised his red state crush as to what type of cats were invited to this particular Lion’s Den.

After suffering through two hours of, what my admittedly biased butt thought were below-the-belt insults on looks and punchline-less death wishes, the receiving end of the ridicule finally took her turn at the mic with the opening line: "I'd like to welcome everyone to the Ann Coulter roast with Rob Lowe," and went on to defend herself as best as she could in front of a crowd that either voted for Obama or meant to, but missed their alarms due to late night Oxycontin binges.*

I was told that Spade, Lowe and Ross reached out to a mutual friend of ours at the after party, expressing regret at what Coulter went through … but the victim in question was already on her way to LAX.

With the aid of a Comedy Central appointed “airport concierge,” (I didn’t know that was a thing, either) Coulter and I were able to make our 11 p.m. red-eye flight back to NYC despite leaving the horror show at 10:30 -- so I guess that was an upside.

The only awkward post-mortem conversation we had was wondering aloud why we picked the awful Hail Cesar as our in-flight movie. So I suspect she’s already over the debacle. Book? Promoted. Horrific insults? Shrugged off. And that’s what it’s really all about when it comes to all things roast: Use it for what it is, and quickly forget how badly it used you.

* Ann always writes her own stuff, but here's the one crappy line I gave her which she used in rehearsal, yet the network, for whatever reason, put the kibosh on: "No matter how many times I mention my book tonight? Rest assured David Spade's scalp will still have the most plugs." No good? Probably no good. Ignore this footnote.