Actually, his name is Lance and he's really nice.

In a land before time (2005 to be exact) the words "New York Comic Con" did not exist. Fast forward to the future (now!) and New York Comic Con is not only a thing, it is the premiere convention dedicated to comic books, anime, video games, toys, movies and television. People come to the event to collect, nerd-out over sneak peeks, listen to awesome creator panelists and more than anything else, play dress up.

I went to the Jacob Javitz Center to check out this year's offering. In an office space overlooking the vast floor of the convention (kind of like a mad scientist's volcano lair, only with more water bottles and beige walls) I spoke with Lance Fensterman, creator of NYCC and senior global VP of ReedPOP, the company that runs the show.

While he did rub his hands together and cackle madly gazing over the insanity he created, never once did he threaten to wipe humanity from the face of the Earth.

In 2006, we were in one single hall downstairs in the Javitz Center. The idea basically came from the question: why doesn’t New York City have a big con? The prevailing answer was, “Because it is really expensive!” But in 2006, we gave it a try. It was a tiny show, tiny hall and big crowd. It did not go well. [Laughs] It was 10 pounds of show in a 5-pound bag. The fire marshal shut it down, people who bought tickets didn’t get in, people who didn’t buy tickets got in, it was a mess. But there was something there.

We apologized, made good with the fans and figured out how to do it better. Now in 2016, we’ve grown so big that we can’t fit in all in the Javitz Center, and are using other venues in the city.

Was this your first big idea?

In a way. Reed Exhibitions was in the business trade show space, and dabbled a bit on consumer trade shows but never in a big way. This was the first consumer show. ReedPOP is the offshoot. We realized quickly that ReedPOP needed its own brand, its own culture, its own identity. We went on to do the New York Anime Festival, acquired a small video game show in Seattle called Penny Arcade Expo, we struck a deal with Lucasfilm to run their Star Wars Celebration and now we’re in 10 countries around the world with about 30 events. 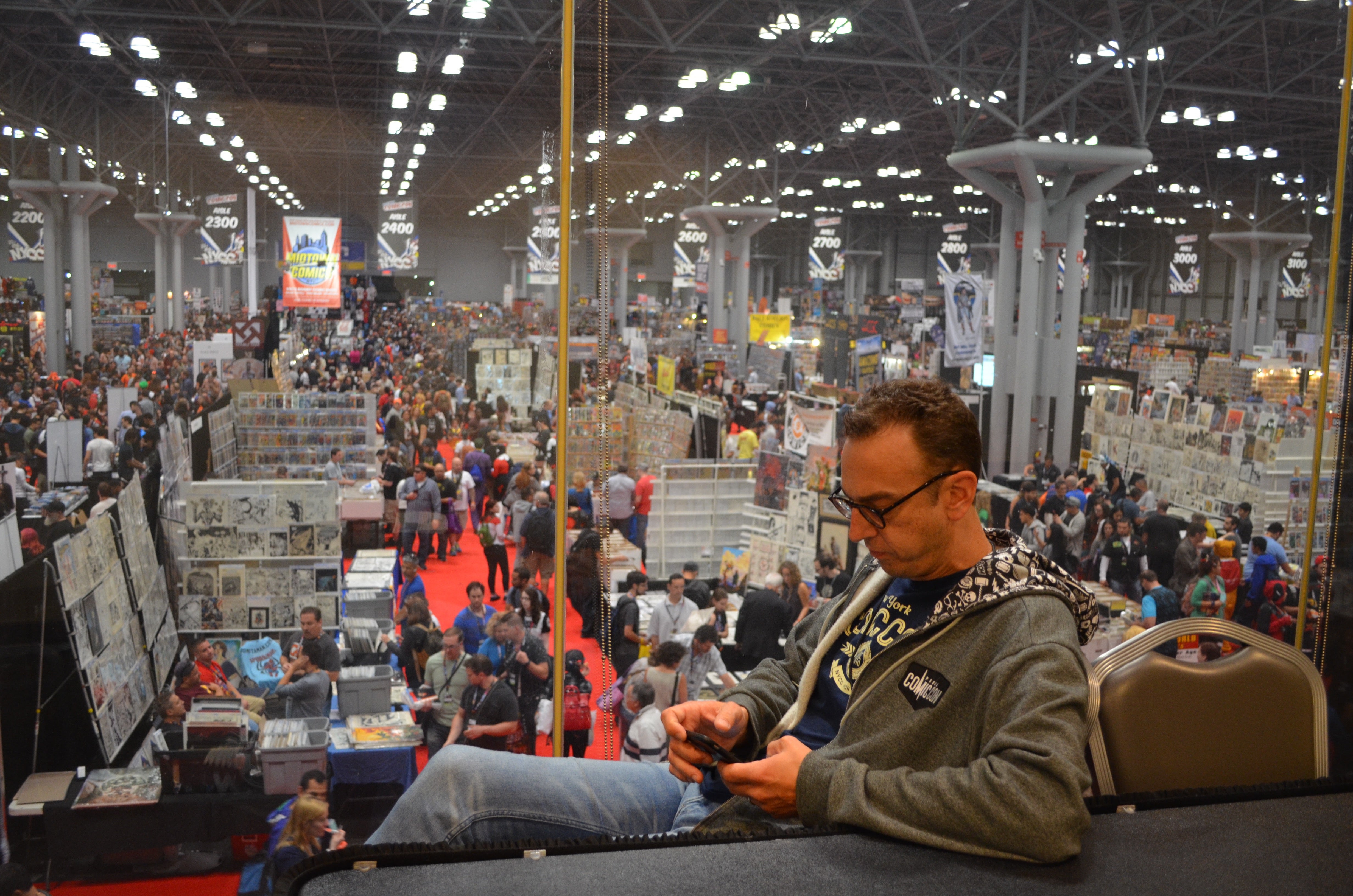 It’s the question that is constantly on my mind. How do you get bigger but maintain the thing that makes it special? I think we do it primarily one way, which is to stay close to the people who matter most, which are the fans. Find out what they want, try to anticipate what they might want before they even think of it. If we stay core to that, we won’t stray too far from the DNA that made us who we are.

Did fandom lead you to doing this?

I’m a comic book fan, video game guy, huge LEGO collector. But what’s interesting though is that you go to these shows and you realize you don’t know what a “fan” is until you start to meet these people. Like I have a lot of LEGO sets, but there are people who have thousands of unopened boxes. They’re like, “You open them and build them?!” They look down on me. [Laughs] Those guys are “fans.” I’m an amateur.

What does being a big LEGO fan mean exactly?

It means that when I was moving once and the last thing I was moving was my LEGOs, because they’re my most precious possessions. So I’m in the elevator and I’ve got one of multiple loads of LEGOs and this person goes, “Oh, your son must be so happy.” And I’m like, “Yeah, my son … who doesn’t exist … I’m not weird, I’m just a grown man with thousands of LEGOs in this elevator alone!”

I had a personal bounty of $500 cash to my team for whoever could get LEGO to come to the show. And we got them four or five years ago. And now I get to get their exclusive toy with the logo of my show on the box, and that’s like little kid Lance going, “Alright, good job adult Lance!”

There are a ton of businesses out there on that floor. Do you give them tips and best practices?

What’s funny is that the smaller guys know what they’re doing. They know how to get customers, bring the right stuff -- they know what they’re doing! The bigger guys are the ones who need a little bit of assistance. They’re not used to hand-to-hand combat with fans! We definitely lend our expertise to non-endemic brands that are here so that they can connect in an authentic way that will be meaningful.

The best way is when you can solve a problem for someone. Like, I think it was Progressive last year, they had professional line standers. Meaning, they had people who would wait in line for you while you walked around enjoying the show. And the fans were like, “Progressive, that’s awesome! You provided more fun time for me.” That’s a great example of a non-endemic activation that fans loved.

How far in advance do you plan this?

I’m looking at my phone and have e-mails about 2017 right now! We are constantly researching and make use of surveys, taking in comments to see what people want and how to make it better. My team, in part, is paid on how much people enjoyed themselves. I found that helps keep us focused.

Related: Hulking Great Investments: 12 Comic Books That Are Now Worth A Fortune

Any regrettable moments over the years?

Um, yeah, OK. Once we did a sponsorship with a toilet paper brand. I thought it was clever, but it wasn’t. It was bad, looked like a total sellout. It wasn’t, I thought it was funny! And there was another campaign, I’m not going to name the brand, that had a clever play on words that was really kind of crass. And it was just stupid. And it was on a lot of our screens in our panel rooms. And our artists and creators would see it on the screen before they spoke and would be like, “What the f*ck is that?” [Laughs]

We realized we should never have taken their money, or happily taken their money and then help them do what they were trying to do in a much cooler way. So yes, there have been regrettable moments!

When you talk about Comic Con, the first thing a lot of people think of is the cosplay. I’m not sure that people realize those are just fans who built these elaborate and expensive costumes just for fun.

It’s true! And it is kind of an indicator for us if one of our cons around the world is a success. The elaborate costumes and sheer number of them is amazing, and we see it wherever we go. It’s not “I like this,” it’s “I want to become this.” That’s a passionate fan base!

Are there any countries where the culture alters what Comic Con is?

No, it is generally very similar. I’ve been all around the world and there is a strain of personality that goes across all cultures and just loves this stuff. Politics sometimes brings in slight differences. Like in Australia, they have very strict age rules on video games, so there will be bigger walls and different configurations to make sure kids won’t be exposed to any of the more mature games.

What is the next step for NYCC?

We want to move into not just curating great stuff, but become more a part of the creation. We’re looking to make this a citywide event, which isn’t easy. “Hey, you have a great idea for a podcast? Go do it at Barcade in Brooklyn.” We want to facilitate and help people who are passionate about this stuff.

What do you think when you look out over that floor?

Well, it’s hard not to see the flaws. These people love this, and it is our job to allow them to enjoy it as much as possible. So for example, this morning, the lines to get in were too long. That took time away from people doing what they love and that’s not OK. But we fix that stuff and keep improving.

An important thing to me is that we help small businesses here. There are a lot of people that are going to make a lot of money here this weekend and that’s important. And what’s funny is we have an interesting dynamic with these sellers. They’re not entirely Incentivized to tell us how well they are doing. If they say, “I’m killing it!” then they assume we’d be like, “We’re not charging you enough!” So they’re a little cagey. “Yeah, it’s going OK.” But trust me, if they weren’t doing well out there, we’d hear it!

Related: Everything You Need to Know About Breaking Into the Video Game Industry

What does seeing NYCC grow mean to you?

We build fun for a living. There’s nothing “serious” here. I watch the debates, there is some depressing shit going on out there. So I love the fact that people can come here and forget all that, dress up, spend some money and just have fun. I mean, there’s a guy in a fucking 10-foot Hulk costume out there! It's wonderful.

Who would you most like to be dressed as down there?

I think I’ll cosplay as a real business man. I'll wear a suit, shave, carry around, I don’t know, spread sheets or a binder or some shit? And I’d spew things about IBIDA or whatever.

Jimmy Fallon Spent Years Chasing A Dream That Wasn't Really His. Finding His 'Why' Changed Everything.