Many investors have lost faith in a sector that once seemed like the obvious extension of the success of ride-services juggernauts such as Uber.
Next Article


Michael Moritz -- chairman of Sequoia Capital and one of the most successful venture capitalists in history -- says a simple vision led him to invest hundreds of millions of dollars in on-demand delivery startups.

"The movement of goods and services and people, by easier, more convenient means," he said in an interview. "That's a huge trend, enabled by smartphones."

Led by Sequoia and another blue-chip Silicon Valley firm -- Kleiner Perkins Caufield & Byers -- venture investors have poured at least $9 billion into 125 on-demand delivery companies over the past decade, including $2.5 billion this year, according to a Reuters analysis of publicly available data.

But that torrent of money has slowed to a relative trickle in the last half of this year, and many VCs have lost faith in a sector that once seemed like the obvious extension of the success of ride-services juggernauts such as Uber. 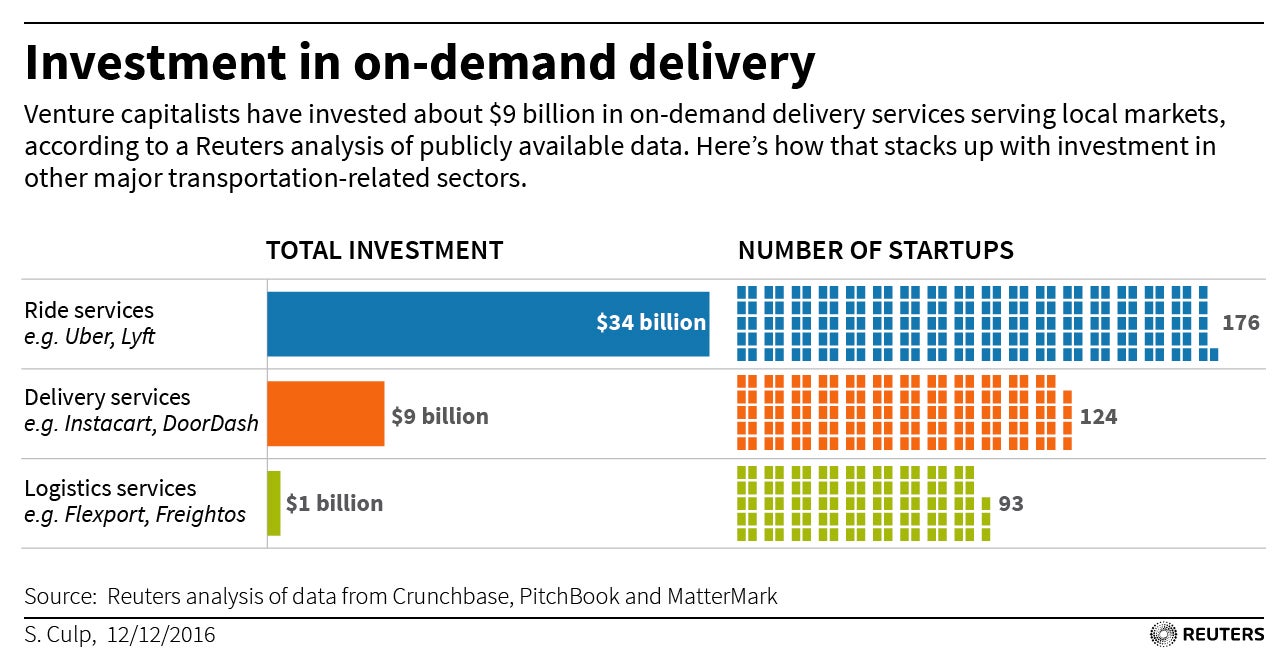 The bulk of this year's investment -- about $1.9 billion -- came in the first half of the year. Only $50 million has been invested so far in the fourth quarter, the Reuters analysis found. Several prominent Silicon Valley venture capitalists said in interviews that they now believe many delivery startups could fail, leaving investors with big losses.

"We looked at the entire industry and passed," said Ben Narasin, of Canvas Ventures. "There is more likely to be a big, private equity-style roll up than a venture-style outcome."

Reuters analyzed investment in on-demand delivery startups using publicly available data from the companies, their backers and third-party websites including Crunchbase, PitchBook and MatterMark. The analysis likely missed some investments because private firms and their investors do not always disclose funding details.

Delivery startups continue to grapple with fierce competition, thin margins and a host of operating challenges that have defied easy solutions or economies of scale, venture capitalists told Reuters. Widespread discounting and artificially low consumer prices have made on-demand delivery "a race to the bottom," said Kleiner Perkins partner Brook Porter in an interview.

That firm has not invested as heavily or broadly in the sector as Sequoia, but has backed U.S. startups DoorDash and Instacart and China-based Meican.

This year has seen high-profile failures, including U.S. meal delivery firm SpoonRocket, which went down in March, and PepperTap, an Indian grocery delivery service backed by Sequoia that folded in April. DoorDash, another of Moritz's investments, was able to close its latest venture funding round last March only by cutting the value of its share price by 16 percent, according to data from CB Insights.

The entry of Uber last year into the delivery business with UberEats, for food, and UberRush, for packages, promises to make life more difficult for smaller startups. Established logistics companies including Amazon and DHL are also exploring local on-demand delivery.

Sequoia has backed at least 14 local delivery firms, among them four in the United States, five in China and four in India. Sequoia did not respond to Reuters requests for a response to rising VC skepticism of delivery firms.

Venky Ganesan, of Menlo Ventures, said the sector has no clear way to cut costs or boost revenue.

Dalton Caldwell, a partner at Y Combinator -- the prestigious tech incubator that birthed a number of delivery startups -- was also skeptical, though he thought companies with top-notch operational capabilities could succeed.

Many delivery startups, he said, "make the assumption that once you get bigger, things will get easier, and that's wrong. There is driver churn, operations people that cost money, more support costs."

DoorDash, founded in 2013 by four students in a Stanford University dorm room, has raised nearly $200 million from top venture firms.

Focusing on food and alcohol delivery, DoorDash has agreements with local restaurants, including franchised outlets, in dozens of cities in the U.S. and Canada. But Doordash still has to figure out comparatively simple challenges -- like how to economically deliver pizzas to the fifth floor of a college dorm with no easy street access.

"There is an opportunity to redefine local commerce in cities," says DoorDash co-founder Stanley Tang. "But we have to figure out, what are the operational challenges, and then how we can scale it up."

Deliv, a same-day small-package service aimed at online shoppers, uses a model similar to Uber's, with contractor drivers delivering packages. The company has venture investors and has also lured funds from United Parcel Service and some of the largest U.S. mall owners and operators, including Taubman Centers and Simon Property Group.

Founder and CEO Daphne Carmeli says that because Deliv does not maintain warehouses or a vehicle fleet, traditional couriers such as FedEx would be "challenged" to match the startup's low costs.

Uber, however, doesn't face those same challenges. The company has not said how much it has invested in UberEats or UberRush, or whether either turns a profit, and a spokesman declined to comment on those businesses.

But Uber does turn a profit on rides services in many cities across the globe and has amassed a war chest of $15 billion, providing ample resources to expand into delivery.

Carmeli is sanguine about the Uber challenge.

Robots to the rescue?

Silicon Valley veterans have long recognized the difficulty in the local delivery business. The online grocery firm Webvan and the urban delivery company Kozmo were two of the highest-profile flops in the late-1990s dot-com boom.

Technology was supposed to make things different this time, and smartphone apps that connect customers with fleets of independent drivers have helped.

But the technology that some believe could transform the sector -- driverless vehicles and sidewalk robots -- remains far from a practical reality, leaving many startups with no clear path to innovate their way to profitability anytime soon.

"We think automated deliveries can complement our human fleet of dashers," said Tang, of DoorDash.

But the company has no timetable for deployment.

"An autonomous vehicle is not going to pick up a package at your retailer, then walk the stuff up to the customer's doorstep and get a signature," she said.

Any delivery company looking to replace humans with robots will have to catch Uber. The company has hired robotics experts from Pittsburgh's Carnegie Mellon University and executives with deep automotive expertise, and is working with major automakers including General Motors and Toyota.

In August, Uber acquired Otto, a startup outfitting long-haul trucks with self-driving technology. Since the acquisition, the Uber-Otto alliance has delved into logistics, mapping and tracking, which can be deployed for delivery trucks even as work continues on self-driving systems, said Otto co-founder Lior Ron.

But delivery companies who can't find a business model that pays with human drivers aren't likely to find one that will work without them, Ron said.

"I don't think you can bank on the robots to come and save the day."

Forget That Product You're Working On. What's Really Going to Sell in the Future Is ... Services.

Lincoln Debuts Uber-Like Service, But With Your Own Car

How 'Uberizing' the Small Business Economy Is Driving Growth

Vertical Is on the Horizon of the On-Demand Economy