The Phone Bed is exactly what you'd expect: A tiny wooden bed with silk sheets, for your phone.

In over two-and-a-half years together, we've never slept apart.

So when I considered testing out Thrive Global's Phone Bed, I was somewhat hesitant. How would I wake up in the morning without the vibration of my phone nearby? What about my evening ritual of scrolling through Pinterest before sleep?

Nevertheless, I was willing to give it a try. I've read the studies that insist looking at electronics before bed contributes to insomnia, and I'm trying to resist the urge to check email before bed.

Plus, I hadn't been sleeping well for a few days and was willing to try anything to get my full eight hours.

When it comes to the product itself, there is no false advertising. The Phone Bed is exactly what you'd expect: A tiny wooden bed with silk sheets, for your phone.

The bed actually fits 10 gadgets (including two slots for tablets), comes in two colors -- poplar and mahogany -- and one side of the blanket is a microfiber cloth for cleaning your screens. The bed costs $100 in Thrive Global's online store.

It looks almost comical when you take it out of the box, as if this isn't a tech product at all and is really just a bed for dolls. And perhaps it isn't really a tech gadget, but something more philosophical. After all, Thrive Global -- founded by Arianna Huffington -- is a company built around the mission of ending stress and avoiding burnout.

While there are definitely cheaper ways to disconnect -- just charge your phone in another room! -- the product forces you to physically put your phone to bed. If it takes an expensive novelty item to make me do that, so be it.

Before I could settle my phone in for its first night without me, there was some setup required.

The bed is powered by a charging port that lives underneath the mattress and plugs into the wall through a hole in the headboard. The battery has an on/off switch and 10 USB ports, so you can plug several devices in at once. The product is actually billed as a "family bed," which one can assume means it's intended to be shared by each family member's device.

Once I got the battery set up and plugged into the wall, I was ready to tuck my phone in for the night. 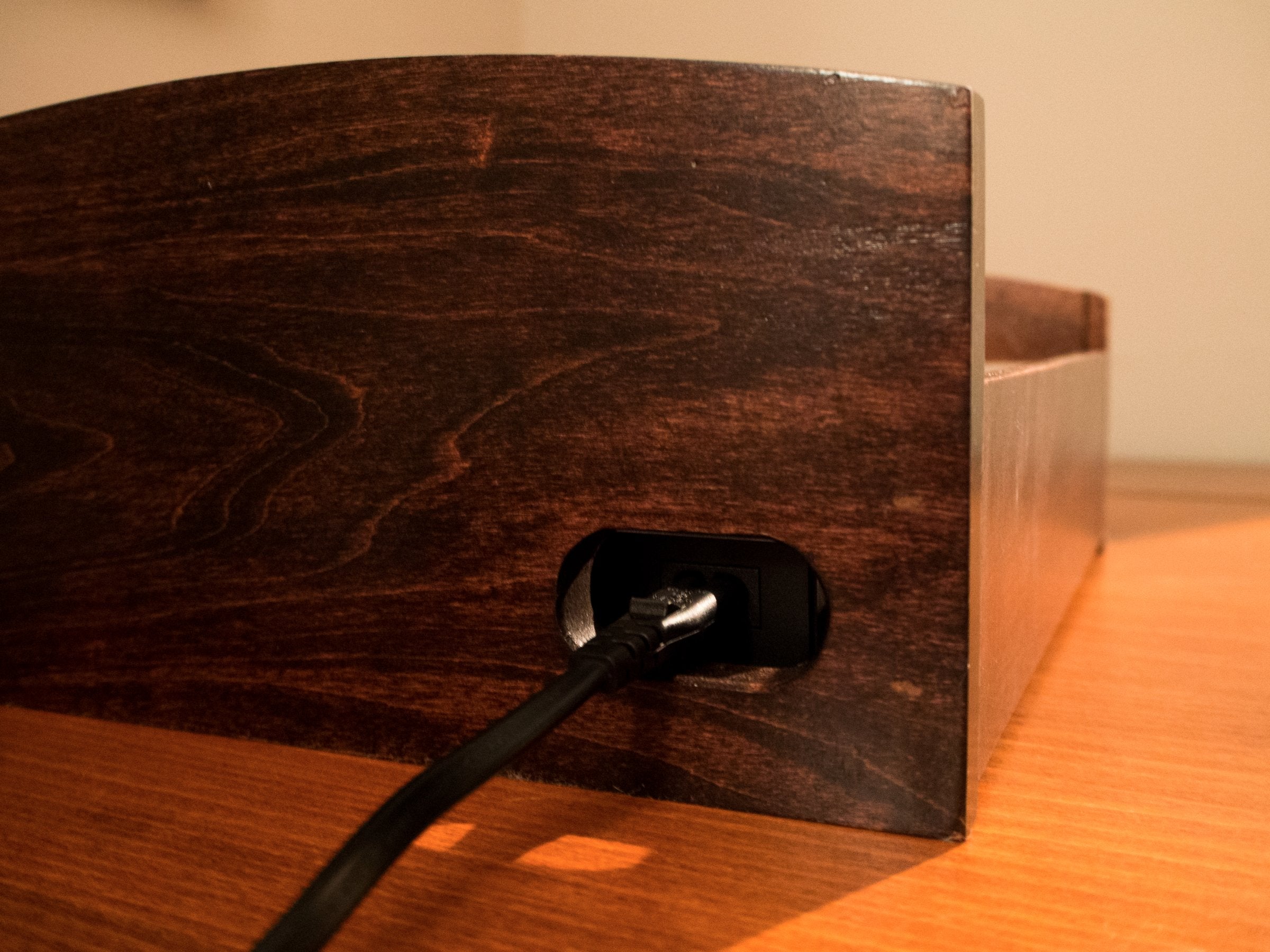 Here's where the charging cord plugs in on the back of the bed.
Image Credit: Avery Hartmans | Business Insider

I snaked my own charging cord up through one of two grooves in the mattress, slid my phone under the silk sheets and shut off the lights, ready for a great night's sleep for us both.

That didn't quite work out.

While I slept well for the first time in days, I woke up to discover that my phone hadn't charged at all and was now at 15 percent with a full day's work ahead of me. It turned out that the cord that connects to the outlet doesn't fit into the battery very snugly and had become askew sometime during the night.

I was grateful for a restful sleep, but disappointed. After all, half the point of the product is to act as a phone charger.

Luckily, I was able to charge my phone on the way to work using a portable battery, so no harm done.

By the second night, I was ready for any possible mishaps. I checked the Phone Bed a few times before heading to my own bed to ensure the phone was actually charging.

Sure enough, by the next morning I was at 100 percent.

One downside of testing this product while I slept was that I'm still not sure how quickly it charged my phone. I can assume, given the size of the battery and the fact that I had only one device plugged in, that it charged quickly. But again, given that it's more of a philosophical product than anything else and that most people sleep for at least five or six hours each night, charging speed doesn't really matter when you're supposed to be getting a full night's sleep.

Another downside: When my roommate walked in and saw a miniature bed sitting on our kitchen table, she laughed out loud at it, which has been the dominant reaction to the Phone Bed so far. When I asked her and another girlfriend if they'd like to test it out with me that night, my friend acted like she didn't hear me while my roommate hesitantly said she'd consider letting her work phone sleep there.

So far, my phone has slept alone in the Phone Bed. 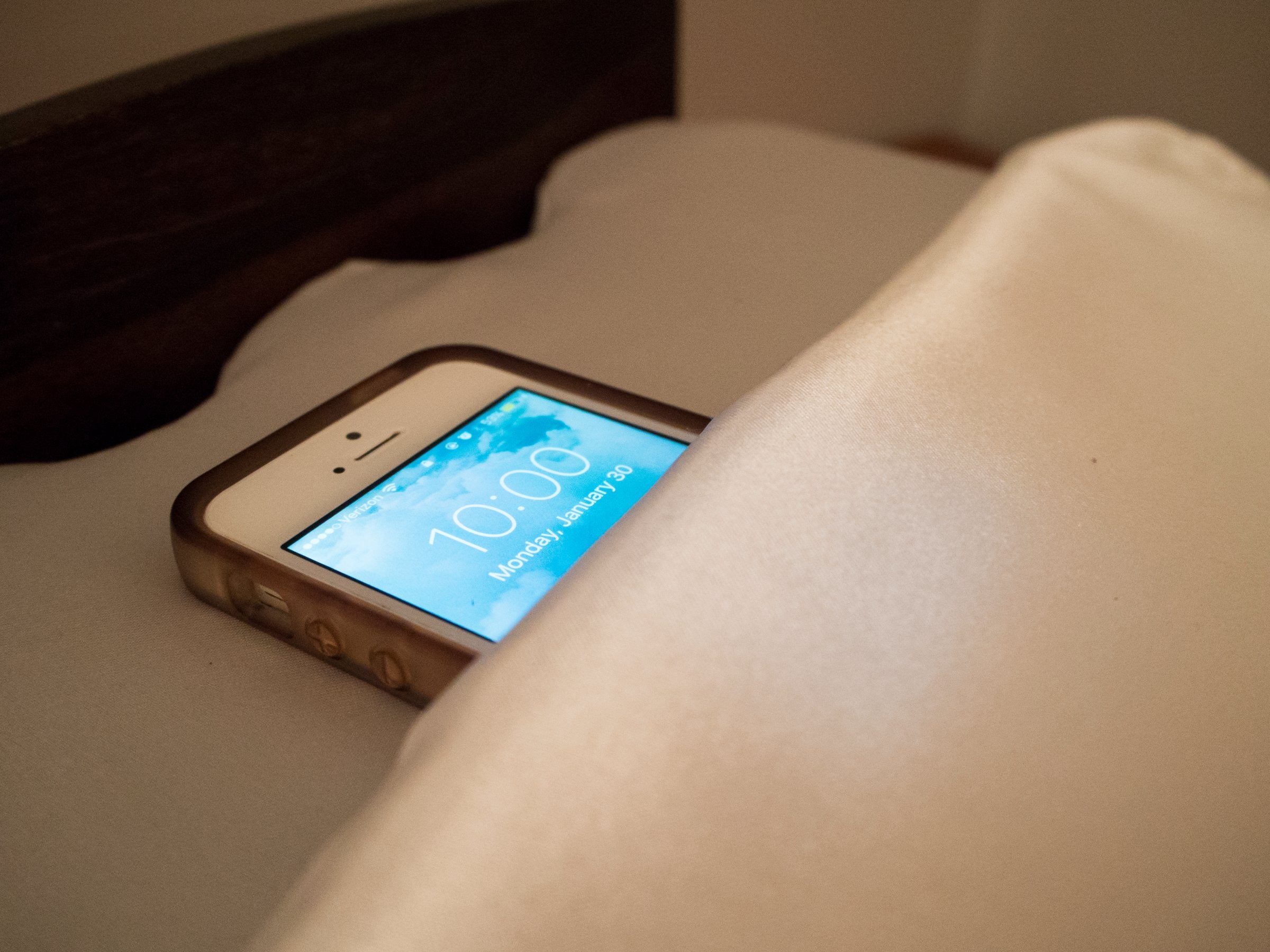 Each bed comes with a blanket that doubles as a microfiber cloth for cleaning screens.
Image Credit: Avery Hartmans | Business Insider

I realized something after waking up after my third night of testing: I was sleeping phenomenally well.

I'm not sure if I can attribute that directly to leaving my phone outside of the bedroom, but it certainly hasn't hurt. I'm falling asleep more quickly and waking up less frequently during the night, if at all. Rather than feeling groggy in the morning, I've been waking up feeling rested.

And, for anyone wondering, I now have a separate alarm clock that wakes me up in the morning.

Overall, the Phone Bed is almost as silly as it sounds and probably not worth spending $100 on -- or maybe it is.

If you can get over the fact that tucking in your cell phone is truly comical, Thrive may actually be onto something. We are too reliant on our phones, we do spend unnecessary amounts of time on them, and we probably shouldn't be sleeping with them in our bedrooms or beds, both for safety purposes and mental health purposes.

And if my three nights testing it are any indication, a fantastic night's rest is the only side effect.