Do You 'Netflix Cheat'? You're Not Alone.

Forty-six percent of couples who stream together around the world have 'Netflix cheated.'

By Angela Moscaritolo February 14, 2017
This story originally appeared on PCMag

So you're bingeing on The Walking Dead with your spouse and they fall asleep. Do you turn off the TV and stay faithful to your partner, or do you Netflix cheat?

According to a new study released today by Netflix, a growing number of people are opting for the latter. The survey, conducted by SurveyMonkey in December, reveals that 46 percent of couples who stream together around the world have "Netflix cheated," aka watched a show ahead of their significant other. That's around three times the amount that admitted to Netflix cheating just four years ago.

The survey also revealed that once you've Netflix cheated, it's hard to stop: 81 percent of cheaters are repeat offenders and 44 percent have cheated more than three times.

"In a binge-watching world where it's easy to say 'just one more,' Netflix cheating has quickly become the new normal," Netflix wrote in its announcement.

So what shows are people cheating with? While Netflix found that "no show is off limits," the "top cheating temptations" are The Walking Dead, Breaking Bad, American Horror Story, House of Cards, Orange is The New Black, Narcos and Stranger Things.

Meanwhile, Netflix cheating has become more socially acceptable over time with 46 percent saying its "not bad at all." Still, 18 percent of couples have gotten into an actual, verbal argument about Netflix cheating.

For more on the phenomenon, check out the infographic below. 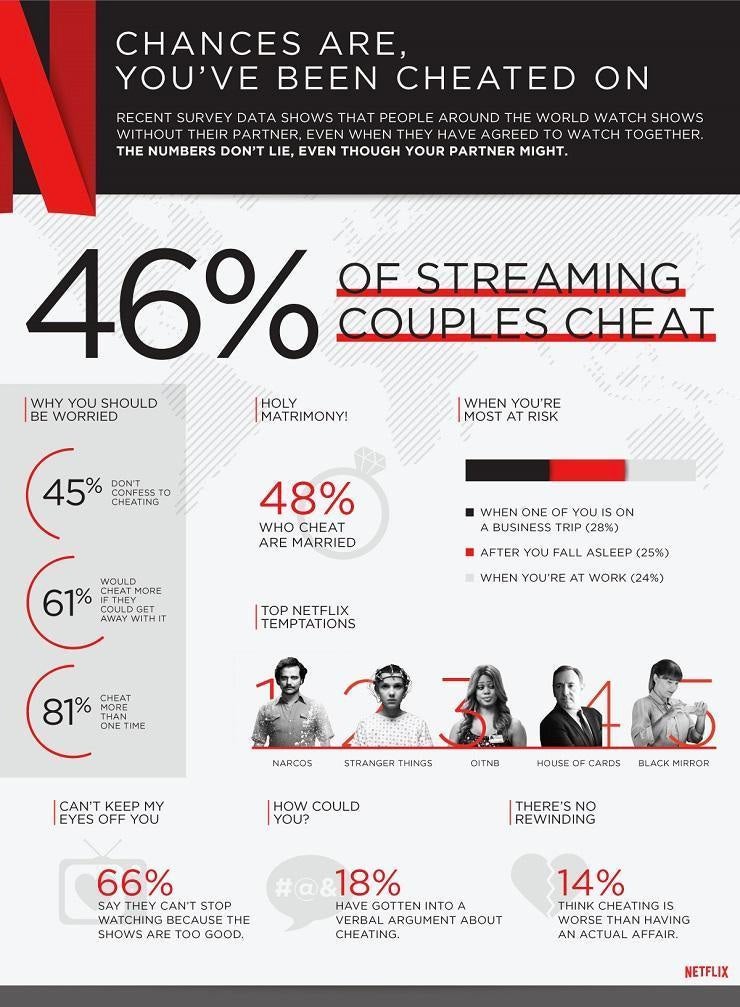