Why risk a landing when a package can be dropped from a safe height...

By Matthew Humphries February 15, 2017
This story originally appeared on PCMag

Amazon needs to overcome a number of hurdles in order to make Prime Air drone deliveries a reality. The biggest of those is the fact that under current laws it isn't legal. But if we assume laws will change and Amazon drones are going to fill the skies, the next problem to solve is the best way to leave a package at its destination.

The most obvious way to achieve this is to have the drone land, release the package from its underbelly and take off again. But this method carries a lot of risk. A pet or human could be injured by the drone, the drone could topple over and become stuck or it could be stolen. It's much safer to keep the bow-and-arrow-proof drone flying at all times, so Amazon is investigating other ways to, quite literally, drop the package off at its destination. 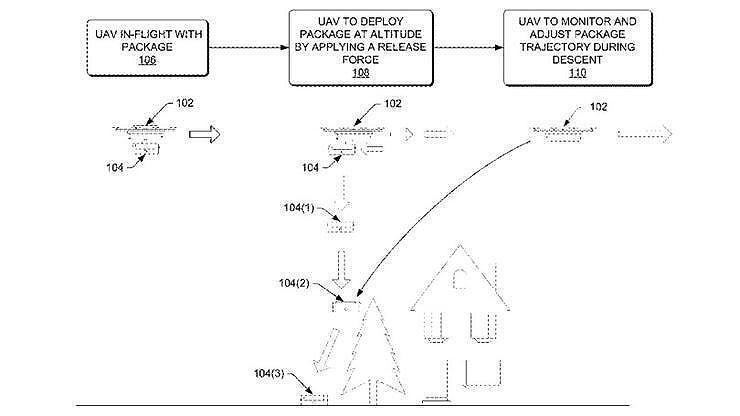 CNN discovered a new patent granted to Amazon, entitled "Maneuvering a package following in-flight release from an unmanned aerial vehicle (UAV)," which describes methods to "forcefully propel a package" from a drone in order to alter its descent trajectory. In other words, the ability to drop a package and make sure it lands in the right place.

Three methods of controlled descent are discussed: a parachute, landing flaps and compressed air canisters. All three allow for the direction of a dropped package to be changed if necessary (for example, there's high winds blowing the package off course). The drone would monitor the descent, sensors would be included with the package, and together they can determine if an adjustment is needed. If so, a flap can be deployed, the canister could fire a blast or two of air, or one or more parachutes could be released.

Even though this drop method would allow the drone to keep flying, they all sound like very complicated and expensive ways to get a package to drop in the right place. Wouldn't it just be easier to have the drone determine how low it needs to hover based on the weather conditions to ensure a successful drop? Then encase the parcel in a drop-friendly protective packaging and let it go. Simple, cheap, reliable.