Love felines? Here are six cat-centric businesses that may give you the purr-fect idea for your own.

It happened at "Cat Camp," a celebration of all things feline this past weekend at New York's Metropolitan Pavilion convention space.

Related: 5 High-Powered Animal Celebrities Who Earn More Than You Do

Apparently, kitties have become big business, or more accurately, big small business. Cat Camp, for example, reported 2,500 visitors for its two-day weekend. And it wasn't even the nation's first or biggest cat symposium: That was Catcon, in Los Angeles, which attracted 27,000 visitors in 2015 and 2016 and was successful enough to announce its return this August at the Pasadena Convention Center.

Kate Benjamin, a symposium speaker in New York and owner of the Phoenix-based design business Hauspanther ("design for cats and how it can make their lives better"), said she's witnessed steady growth in cat-centric businesses. "In the past 10 years, I've seen a huge boom in people selling cat art, cat products, things that are drawing attention to cats and how wonderful they are," Benjamin said. So much so that she's co-authored (with Animal Planet's Jackson Galaxy) Catification and Catify to Satisfy -- books about cat-friendly design that have become bestsellers.

Christina Ha, Cat Camp's founder, has gotten in on the trend, too. A pastry chef and bakery owner by trade, Ha added a Manhattan-based cat cafe, Meow Parlour, to her small-business portfolio. The move was a tad surprising, considering she's "1,000 percent" allergic to cats. ("Do you know how much Benadryl I'm on right now?" Ha quipped).

She got more serious, however, describing the motivations that prompted her to organize the Cat Camp event. "One of the things I've noticed in the past two years," Ha explained, "is, there are a lot of cat lovers out there who really, really love cats and want to be around them more but haven't figured things out, like how to get involved with rescue and things like that. And I thought, 'Why not have an environment that's educational and fun, so you're not talking about sad stories; you're talking about change.'"

Related: Want to Run a Pet Café? These Founders' Tips Can Help.

One reason may be the burgeoning cat-centric businesses evident at these symposia, the donations they make to rescue organizations and the adorable, adoptable furry felines they offer on site.

Interested in joining the cat-centric trend? Consider these Cat Camp catpreneurs and their various businesses as potential models:

About 17 cat cafes already exist in the United States, said Adam Myatt, a Cat Camp speaker and co-founder of West Oakland, Calif.-based Cat Town Cafe (the nation's first). The phenomenon began in Tawian in 1998 and has become especially popular in Japan, where landlords rarely welcome pets in the nation's tiny apartments. Tokyo, to cite just one locale, now has more than 60 cat cafes.

Ha, also speaking on the panel, said that a cat cafe startup's costs range between $100,000 and $300,000, depending on location, and that the income is generally sufficient to survive on, "though this is not a get-rich-quick scheme."

Myatt's own nonprofit cafe startup began with $40,000 in crowdfunding and another $20,000 from sponsorships. And besides coffee and pastries, Myatt offers hope: In two and a half years, he said he's adopted out 500 cats and helped the local shelter drop its euthanasia rate by 42 percent.

In terms of the fine print, both cafe owners advised would-be entrepreneurs to require signed waivers for customers -- who can sue if they're injured by the cats. The two also reminded listeners that city health codes prohibit food businesses from inhabiting the same space as animal businesses. So, the food is purchased from the owners's separate storefronts and brought in.

Ha, meanwhile, noted that because cat cafes rely on foot traffic, tourism-rich towns make ideal settings. She also said she imposes rules for interacting with her cafe's on-site 14 cats: "We used to let people pick up cats," she explained, "but they wouldn't let them go."

Meowgarita. Pinot Meow. White Kittendel. Moscato: These are some of the "all-natural" beverages for cats marketed by Golden, Colo.-based company Apollo Peak. "We were the first company to create a beverage for cats; we're creating a whole new market," said founder and CEO Brandon Zavala. "I was sick of seeing [pet] stores that just had dry food."

That's why Zavala and his partners decided to have some fun, putting together ingredients such as beet juice and catnip and watching what happened. At this juncture, Zavala said, the product is in 200 U.S. stores and revenues are up to $525,000 a year.

Here's a video of cats lapping up the stuff and having an intoxicating good time.

You've probably seen this media-star feline, who is strangely photogenic owing to her prominent tongue, because she was born without a lower jaw. Lil Bub was rescued in 2010 from an outdoor shed by a family acquaintance of company owner Mike Bridvasky, of Bloomington, Ind., who then posted an image of his new pet and watched it go viral.

Today, the puss's mug adorns a full line of merchandise on display at Cat Camp: socks, stuffed animals, calendars, coffee mugs and more. Bob Shaw, Bridvasky's friend and co-worker manning the Cat Camp booth, called Lil Bub "a symbol for all cats and animals with special needs." The celebrity cat is regularly trotted out to charity meet-and-greets, Shaw said, where people buy tickets "to soak up her magic." 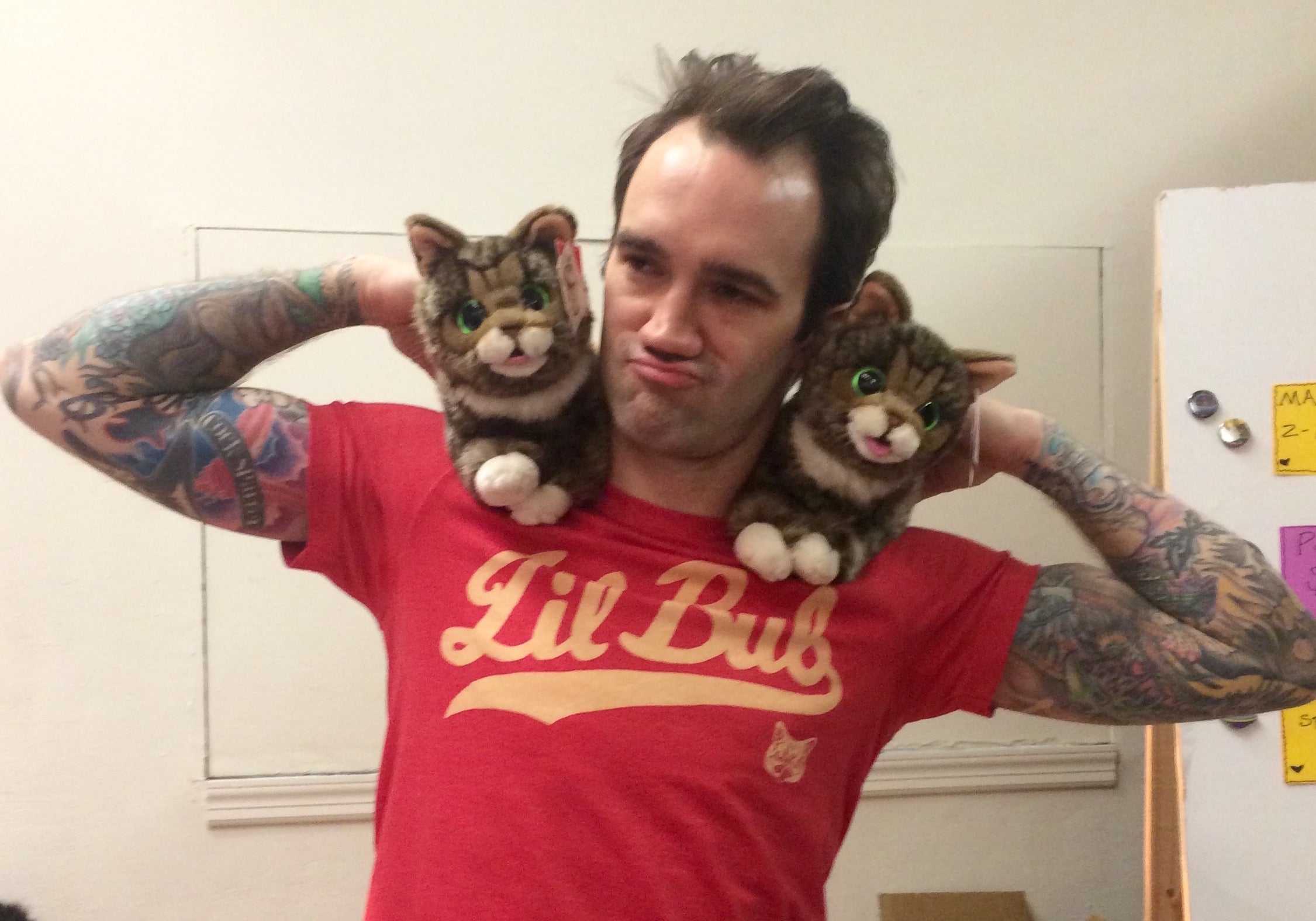 Together, Shaw and Bridvasky run a Bloomington merchandise shop whose revenues run about $200,000 a year.

Pussweek, written "by and for" cats, debuted in 2014 and offers comic articles such as "Anatomy of a Plastic Bag"; "The Beach: Nature's Big Sandy Litter Box"; and "Climbing a Tree Is Not for Everyone."

The website warns that any reader with thumbs or the ability to bark should get out of here "right meow."

Hauspanther is Kate Benjamin's Phoenix-based business devoted to what she calls "the coolest things for cats."

"My goal," Benjamin said, "is to seek out designed products and environments for cats that improve their lives and prevent them from being adopted [out], surrendered out or declawed."

Ever heard of "catios"? Benjamin can tell you all about them. She also sells clocks, perches, towers and shelving products to deck them out.

How to get the 'CURP' out of your tenderloin? This is how you can do it in CDMX

They create an app to understand the feelings of the Michis

The michis are now the most spoiled, or so ecommerce shows