Trump's account was deactivated by 'a Twitter customer support employee...on the employee's last day.' It was back online 11 minutes later.

By Michael Kan November 3, 2017
This story originally appeared on PCMag

For a few brief moments last evening, President Trump's personal Twitter account was no more. Those visiting @realDonaldTrump were met with a "Sorry, that page does not exist" message. 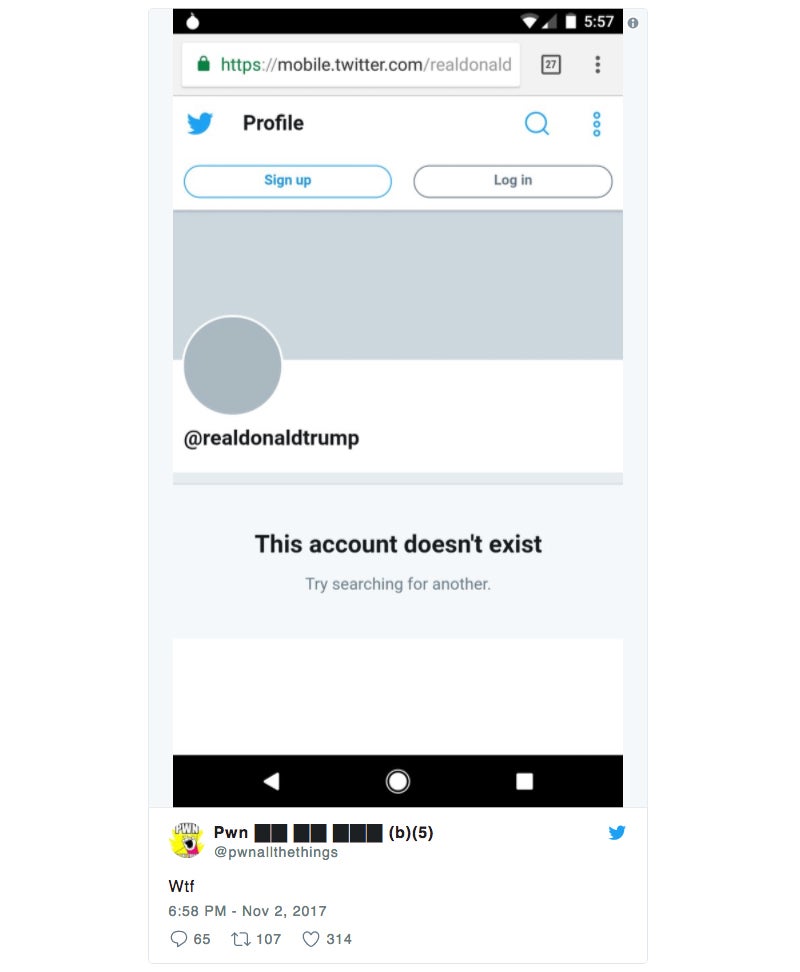 But just as the Twitter world got riled up about Trump's 140-character demise, his account returned. It turns out a Twitter employee deactivated @realDonaldTrump. The shutdown only lasted for 11 minutes Thursday afternoon, but 11 minutes is a lifetime on the internet. "Trump's Twitter" quickly started trending, prompting a response from the company:

Earlier today @realdonaldtrump’s account was inadvertently deactivated due to human error by a Twitter employee. The account was down for 11 minutes, and has since been restored. We are continuing to investigate and are taking steps to prevent this from happening again.

Later, Twitter acknowledged that the deactivation was carried out by an employee on their last day.

Through our investigation we have learned that this was done by a Twitter customer support employee who did this on the employee’s last day. We are conducting a full internal review. https://t.co/mlarOgiaRF

Prior to Twitter's explanation, users questioned whether the president had finally crossed the line and tweeted something Twitter found too controversial to let stand. In recent weeks, Twitter has been vowing to crack down on abuse, and it recently suspended the account of Trump ally, Roger Stone. However, Thursday's shutdown had nothing to do with stricter content policies; it was just a glitch.

How Twitter "inadvertently deactivated" one of its most famous users isn't clear. But other Twitter users were happy to crack jokes about the whole incident.

It wasn't a mistake, @TwitterGov. Think of it as a new feature we all wanted.

Despite the jokes, Trump is back to tweeting without mention of the brief shutdown. Today, he has been tweeting about DNC funding, tax cuts, his selection for Federal Reserve chairman, Broadcom, the World Series, immigration and -- perhaps most controversially -- his belief that the driver of the van who struck and killed several people in New York City on Tuesday should receive the death penalty.

Update: Early Friday morning, Trump tweeted about the incident, suggesting the deletion was because his tweets are "having an impact."

My Twitter account was taken down for 11 minutes by a rogue employee. I guess the word must finally be getting out-and having an impact.

Why You Should Make Twitter Spaces Part of Your Business Strategy