How Effective Is Twitter Promote Mode? We Tested It for 30 Days.

In this post, you'll learn about how Twitter Promote Mode works and the results of a 30-day experiment.

By Alfred Lua January 25, 2018
This story originally appeared on Buffer

Late last October, we received an email from Twitter with the subject line, "@buffer, you're invited to our beta program." We were lucky to be the few selected for Twitter's new automated ads beta program, Promote Mode.

The idea is simple:

At Buffer, we are always excited to experiment with new things, especially around social media marketing. So we jumped right in! We paid $99 upfront and tested the Promote Mode for 30 days. 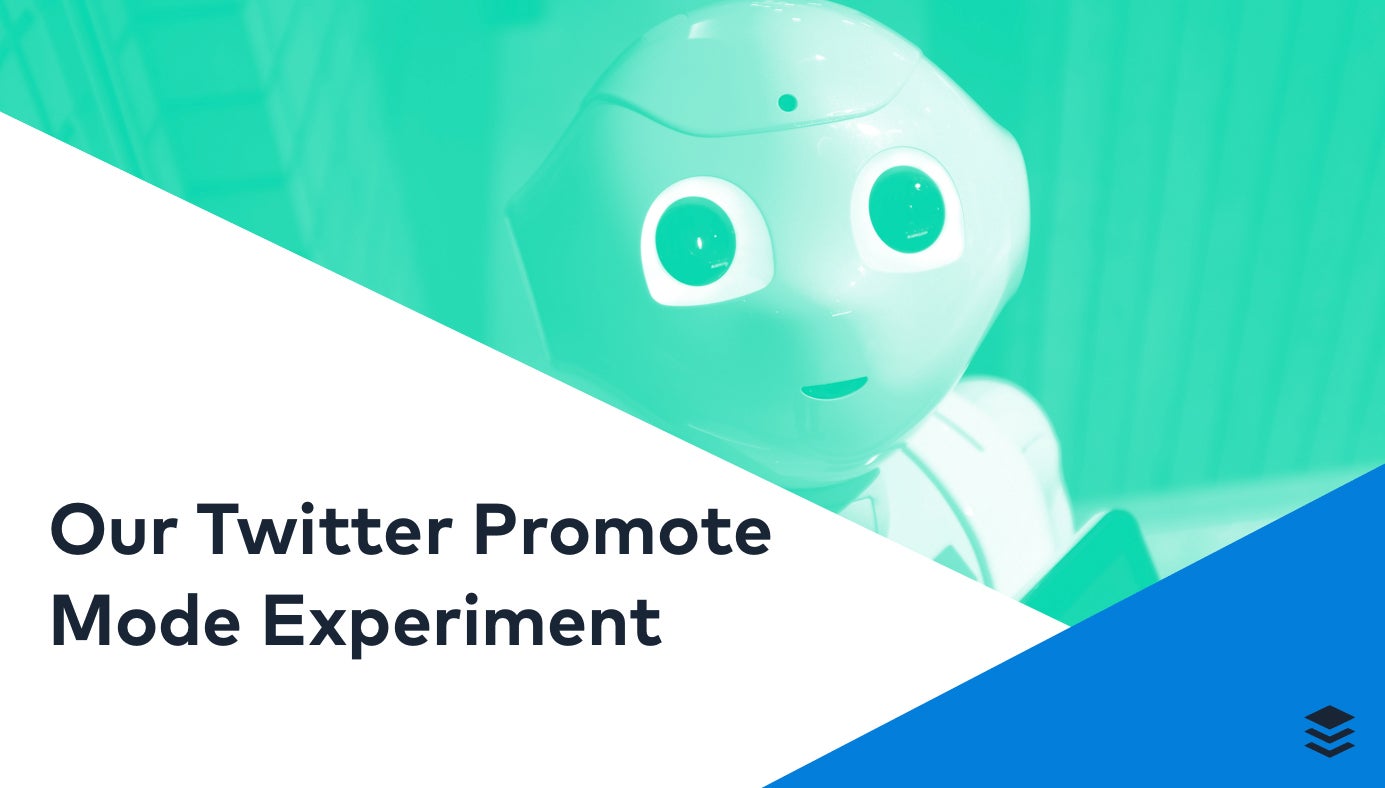 The official name for Twitter's automated ads program is Twitter Promote Mode. Here's how it works:

This program is great for people who want to promote their brand or products on Twitter and want to save time and hassle from running Twitter ads manually.

According to Twitter, "accounts with up to 2,000 followers will see the most value," and Twitter is working on higher price plans for accounts with larger following.

How to set it up

It's super easy to set up the Twitter Promote Mode; it takes only four quick steps. If you want to follow along, you might be able to find the "Promote Mode" option when you click on your profile image on twitter.com. 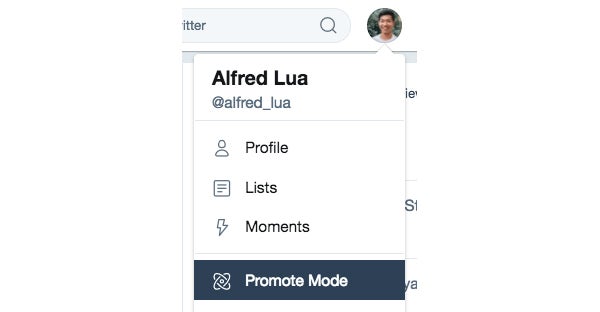 Otherwise, you can try this direct link: https://ads.twitter.com/subscriptions/mobile/intro

1. Select your country and timezone 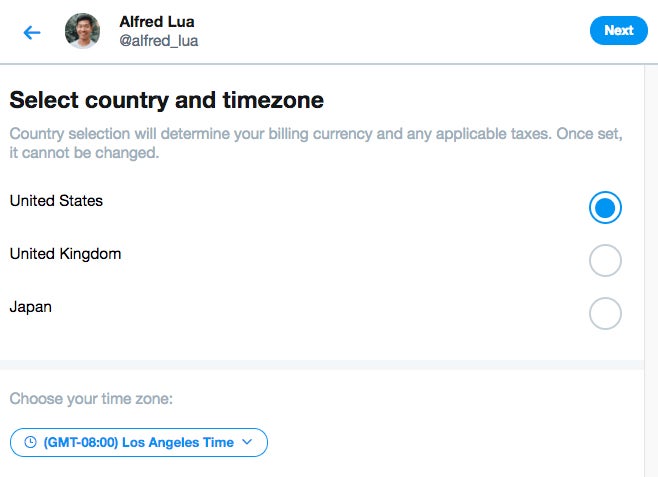 The Twitter Promote Mode is currently only available in the U.S., the U.K. and Japan. As I was able to subscribe to the program from Singapore, it's likely that the program is available outside of the three countries stated.

Note that you will not be able to change your country and time zone once you start the subscription.

You can have your tweets promoted to either people who like certain categories, such as "Pets" or "Travel" (i.e. "Interests"), or people in specific locations (i.e. "Locations"). 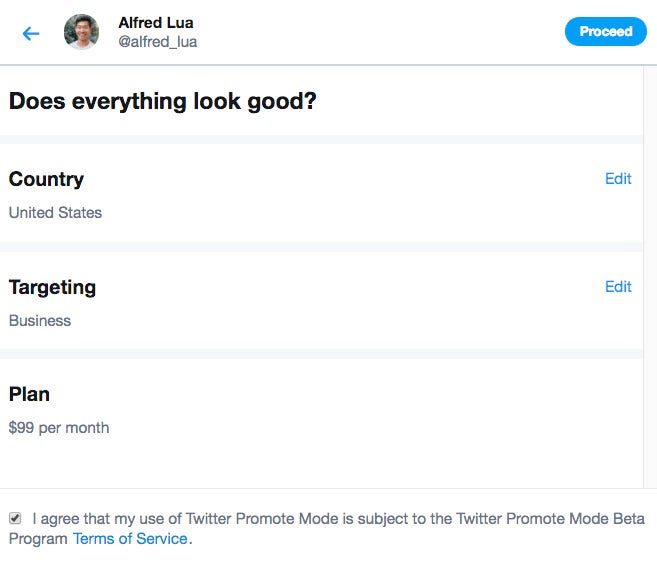 Finally, once you've checked your settings and checked the agreement at the bottom of the page, click on "Proceed." You will be prompted to enter your credit card details. Twitter will review your account before it starts your subscription.

When Twitter approves your subscription, you can sit back, tweet (or Buffer your tweets) and enjoy automated promotion of your tweets.

The easiest way to see your results is through the Twitter mobile app. Tap on your profile photo, and then tap on "Promote Mode 2." These are the data you can see on your dashboard:

Over the 30-day period, I took a screenshot of our results almost every day to track our progress. At the end of each week, I would record the results up to that point. Here's how the tracking document looks like: 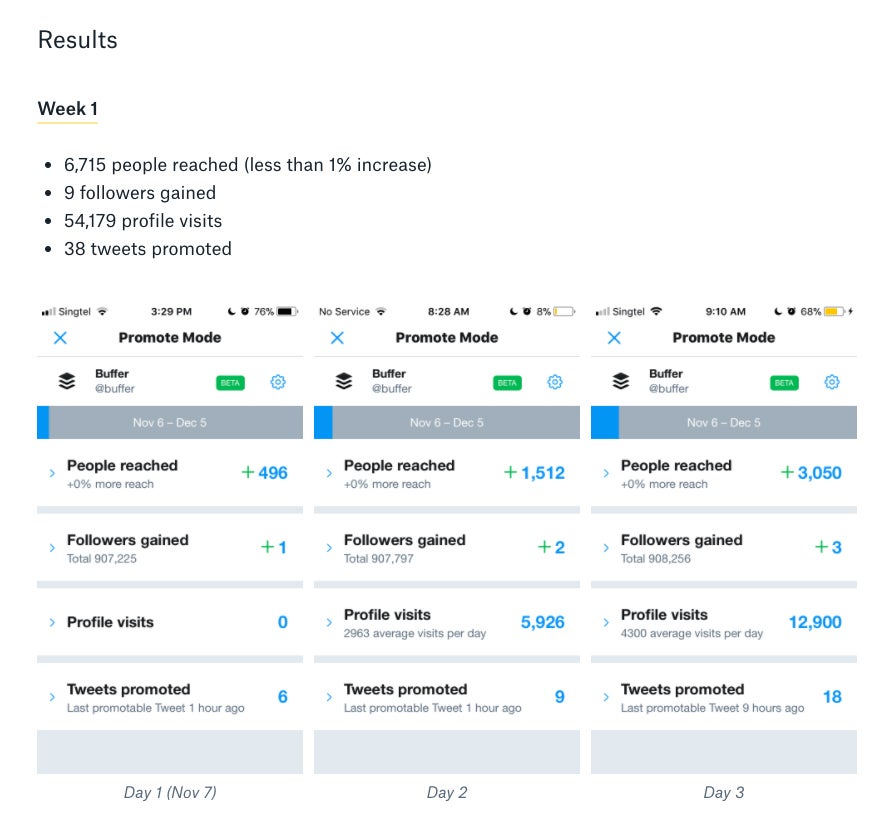 At the end of the 30 days, here are our results from the Twitter Promote Mode: 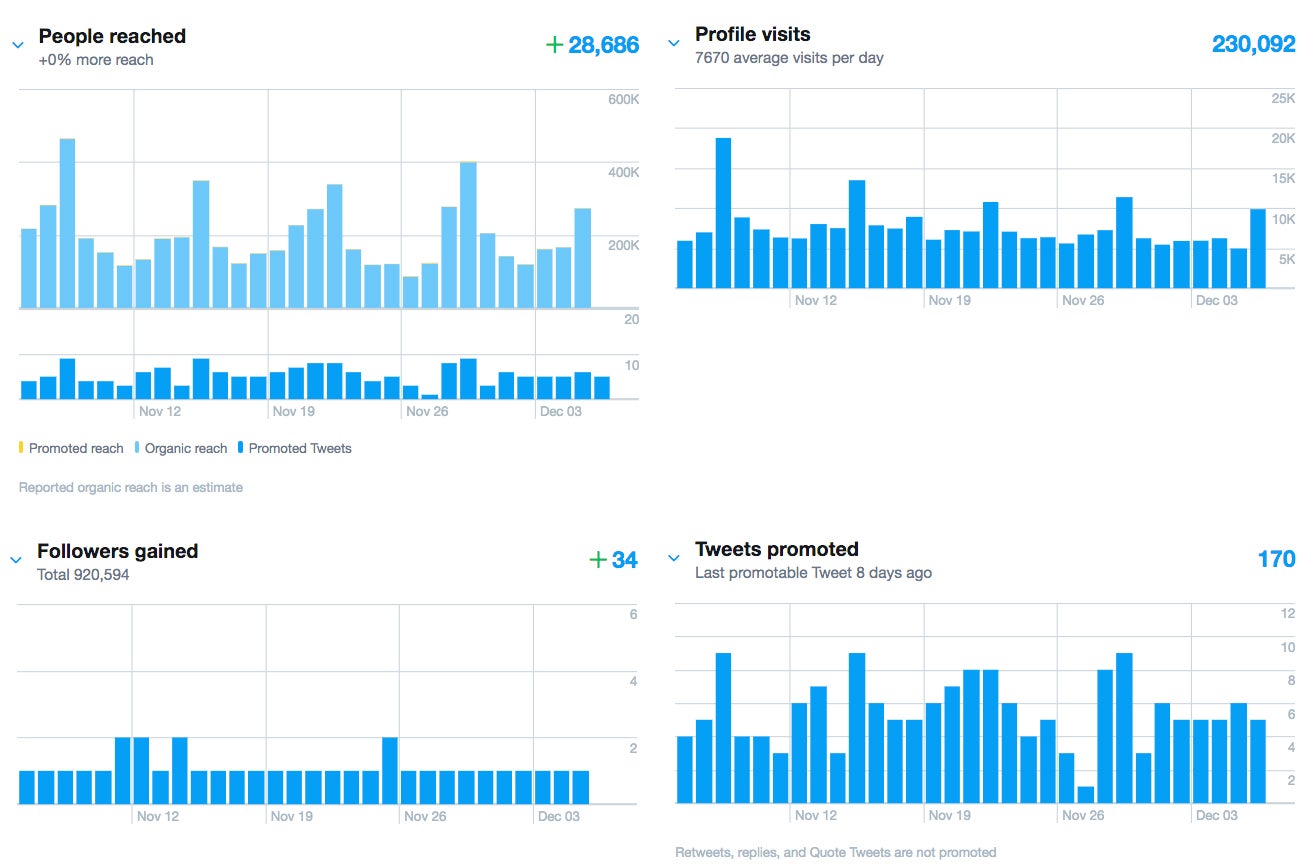 Besides looking at our data, I thought it might be helpful to also look at the results of others who have tested Twitter's Promote Mode.

Matt Navarra, Director of Social Media for The Next Web, achieved similar results -- 26 new followers gained and about 36,000 additional people reached. (For context, Matt Navarra mentioned that he usually gain about 600 to 1,000 followers organically every month.)

Today is the last day my account has Twitter's Promote Mode active.

Here's what 30 days of the $99 p/m Twitter feature generated pic.twitter.com/G8SWxxwfNY

Rhys Gregory, Digital Director at Effective Communication, did a quick video review of the Twitter Promote Mode and shared his results -- 43 new followers gained and about 36,000 additional people reached. 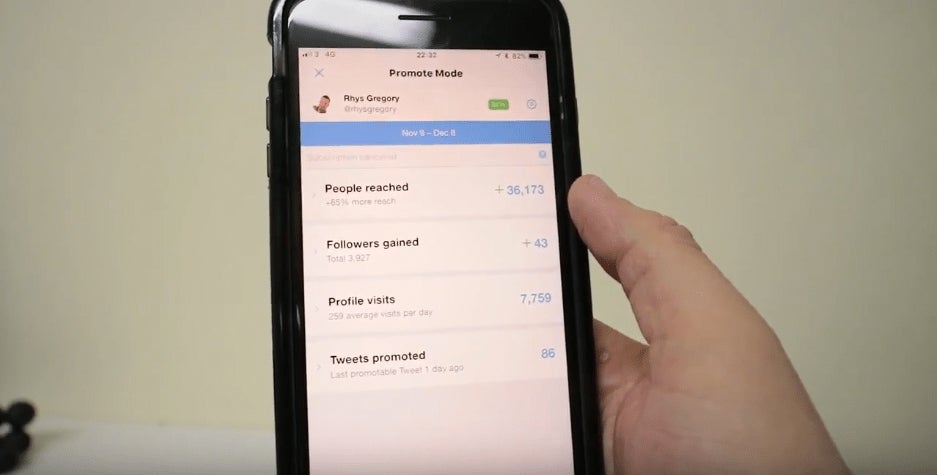 Evan Kirstel, a social media consultant,? tweeted his results halfway through a month of the Twitter Promote Mode. Assuming the results would double by the end of the month, he would have gained 24 new followers and reached about 50,000 additional people.

Anyone else signed up for #Twitter's new promote mode? What's been your experience? #socialmediatips #SocialMedia pic.twitter.com/q953mWyyRt

The performance of the Twitter Promote Mode seems to be fairly consistent and in line with what Twitter promises -- "On average, accounts will reach 30,000 additional people and add 30 followers each month."

We based our decision on three main factors.

Besides looking at the results in isolation, we compared them with our Facebook ads performance. The Twitter automated ads performed slightly better than our recent Facebook engagement ads in terms of the reach per dollar spent.

But it might be helpful to note that the automated Twitter ads are not scalable. We cannot spend more money to get more results, unlike Facebook ads. So based on our results, we can expect to reach about 29,000 additional people every 30 days for $99.

If we were to look at the follower growth only, we can also see that each new follower from the automated ads cost us about $3, which is pretty expensive. (This is a rough calculation as the ad money paid is used for both promoting our tweets and gaining followers.)

Limited targeting options: Firstly, we can only choose either interest targeting or location targeting (and not both). I feel that this makes the audience a little too broad for the ads to be effective.

Secondly, only two of the interest options, "Business" and "Technology and computing," make sense for us. Furthermore, they aren't exactly our audience's interests -- marketing and social media. So the people that we've reached might not have been our actual target audience. A case in point: despite reaching more than 28,000 additional people, only 34 followed us. 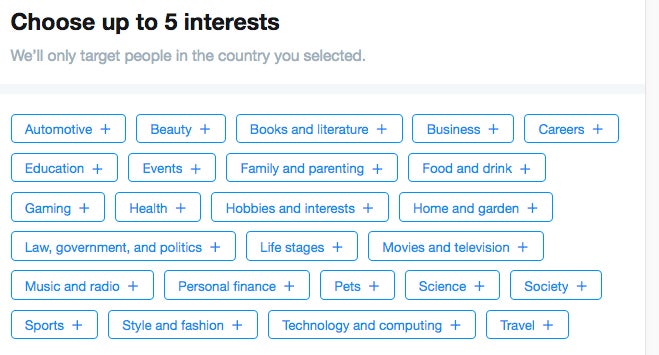 Unable to select which tweet to promote: I believe this is meant to be an advantage of the program, where the promotions are on auto-pilot. However, as we tweet very often, it'd be great if we could select the tweets for promotion. For example, it might not be useful for us to promote a #bufferchat question.

Finally, the automated nature of the program provides a great ease for individuals and small business owners who might not have the time to manually create ads. We can just set and forget... (to a certain extent.)

It could be possible for the program to promote an inappropriate tweet, such as tweets about Buffer's downtime or our condolences for world tragedies. During these times, we'll have to manually pause the promotion. (Yes, you can pause the promotion anytime but that won't pause your subscription.)

That said, this situation is quite unique to us. If all of your tweets are suitable for promotion, you won't face this challenge.

Will you try it?

Overall, we believe that the Twitter Promote Mode could be more valuable to accounts with a small following (up to 2,000 as suggested by Twitter). We'd also be keen to check out the additional plans Twitter rolls out for Promote Mode and whether some might be better suited for those who already have a reasonably large following.

A good rule-of-thumb to decide if this is suitable for you might be to compare your organic Twitter performance with the average Twitter Promote Mode performance of 30 new followers and 30,000 additional reach. Here are a few more things to consider

If you would like to read more about the program before you try it, you can check out Twitter's help page.

Now that you have read our analysis, do you think you'll give it a try?