An interior design expert shares tips for sprucing up your office space, drawing on the philosophy of biophilia.

Earlier this year, Amazon opened The Spheres, a group of three glass dome greenhouses near the company’s Seattle headquarters. The Spheres are home to more than 40,000 plants of more than 400 species, hailing from 30 countries around the world. The idea for the spaces stems from the science-backed design concept of biophilia. The point of The Spheres is to give Amazon employees access to nature during the workday.

Plant-filled spaces “inspire creativity and even improve brain function,” Amazon explains on a company blog. Effects like these contribute to the philosophy of biophilia, popularized by biologist Edward O. Wilson in his 1984 book of the same title. When people spend time around plants, benefits abound, according to various studies: They’re less stressed, more focused and more productive.

Biophilia guides the work of interior landscaping company Ambius, whose designers have shaped the vegetation for offices at companies such as Pinterest, Cushman & Wakefield and Segment.io.

Related: Take a Look at This Cosmic Coworking Space That Was Inspired By a Hallucinogenic Drug

Kenneth Freeman, Ambius’ head of innovation, has been with the company since the 1990s and has since evolved his understanding of why humans are drawn to keeping plants in indoor environments and why doing so improves health and well-being. It’s not that they produce oxygen, he says. Office plants can’t generate enough to replenish the stale air of an office space. Rather, the mere presence of plants elicits a subconscious reaction.

“We have a deep-seated psychological need to connect with nature,” Freeman says of our animal instincts and co-evolution with nature. “When you place animals in an alien environment, they show signs of stress. Animals are happy when you provide enrichment and you make their environment as natural as possible.” 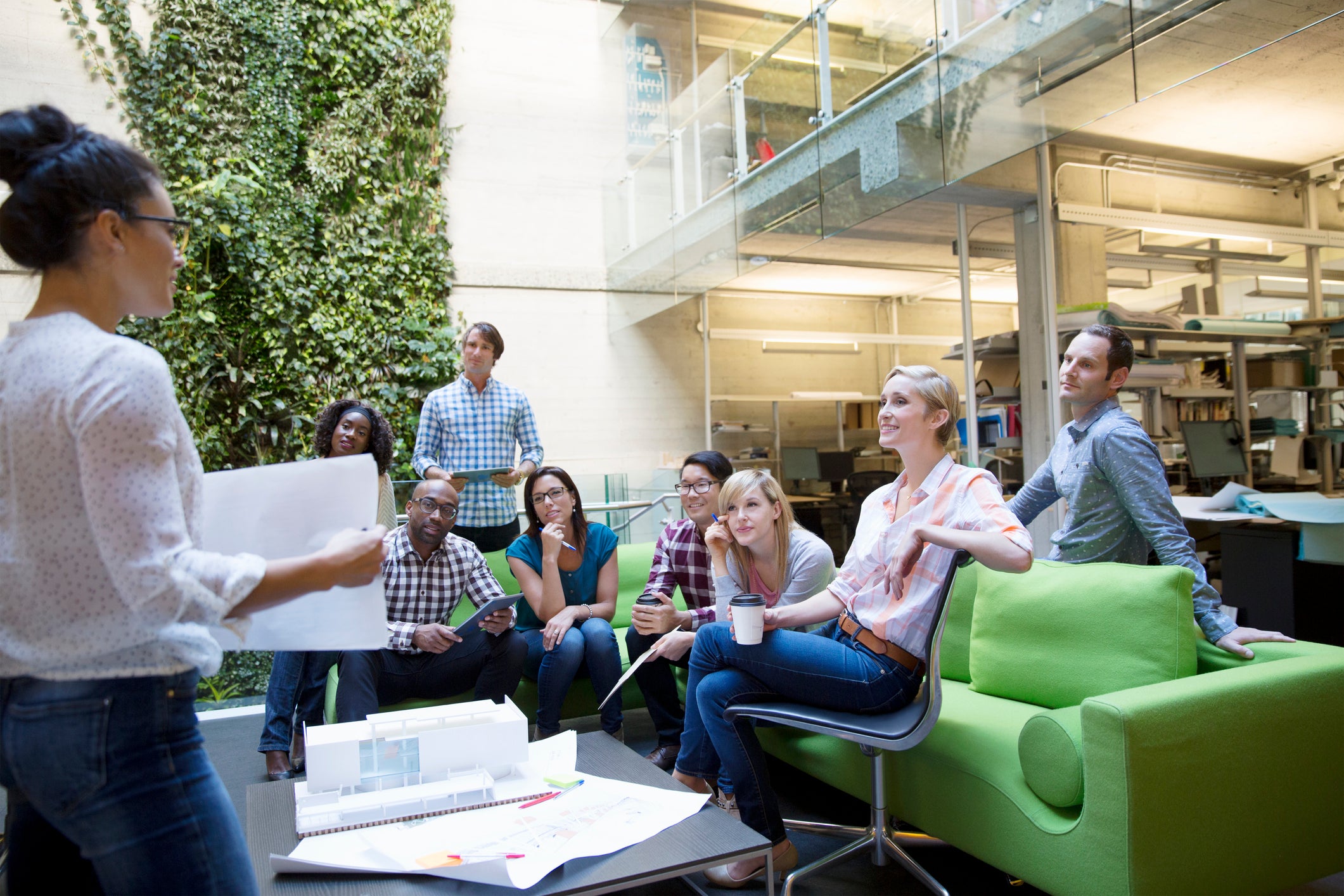 “You can’t put people in sterile conditions and expect them to do a day’s work,” he adds.

Freeman provides five tips for companies looking to add plants to their spaces to maximize their benefits.

1. Give employees a say.
Whether a company is deciding among desk layouts, furniture or plants, Freeman says giving workers the opportunity to provide their input gives them a sense of ownership of the space.

“Interior design has moved through an evolution where design is done to someone,” Freeman says, “to where it’s designed for someone, with their best interests at heart.”

It connects the idea of designing with the end user in mind: Employers can give their employees choices from a few species of plants, as well as where to place them within the office.

“The worst thing you can do is consult with staff and then still have management make the ultimate decision,” he warns, whereas being part of the decision-making process in an organization can improve employees’ self-esteem.

He compares it to issuing company cars. Companies can select the model and price range of the car, but allow the employee who will be driving it pick the color, for instance.

2. Make sure the plants are arranged randomly, which is to say, naturally.
Freeman says he often sees organizations place plants within offices at regular intervals – perhaps one on every other cubicle partition or filing cabinet. Given the grid-like pattern of desks in most office spaces, “rigid, very uniform” plant design is the solution many companies implement.

But “nature’s pretty random,” Freeman says, and designing office plants in this way creates what’s “effectively a plantation, no more natural than a field of corn.” Instead, randomize them, cluster a few together and incorporate different heights and textures, he advises.

Still, Freeman says, having a plant on every desk or at the end of every row, while unnatural, is still better than no plants at all when it comes to cultivating biophilic design.

Related: What It's Like Inside Etsy's New Arty, Sustainable Headquarters 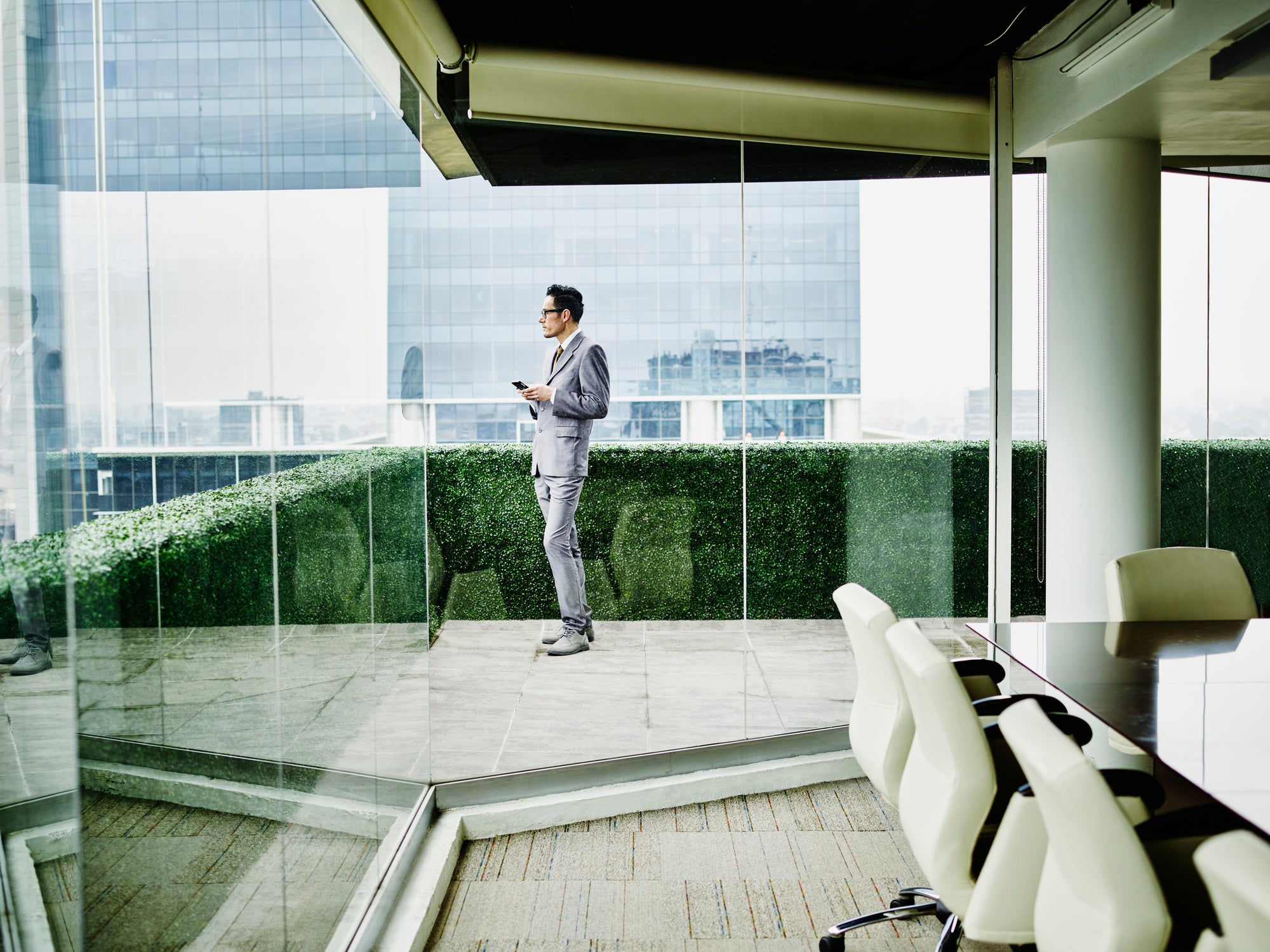 3. Keep tastes and preferences in mind.
Some people like a few big, bold leafy plants here and there, Freeman says, while others prefer smaller, more delicate ones, but more of them.

Demographics may come into play, too, though any preferential differences would of course amount only to generalizations. Also, “in many organizations,” Freeman says, “there is a disproportionate number of older men in senior positions and younger women in junior positions, thus making it hard to isolate whether the differences observed are male/female or junior/senior.” Going back to the first tip, it might be best to survey your employees to get a sense of what they like.

“It really comes down to personal choice, and what you feel comfortable being surrounded with,” he adds. That’s why it’s important not to assume what workers want, but to ask and do your best to accommodate, based on what environmental conditions, such as the lighting conditions in your office, will allow.

Then there’s the element of what’s in style. Right now, succulents are big, Freeman says. And he says client requests have begun to hint that the next big thing may be large leafy, tropical plants that were trendy back in the 1970s and ’80s.

4. Be aware that people might get attached.
Plants are living things, and in some organizations, if a plant is on its last legs and needs to be taken out and replaced with a new one, an employee might get a bit possessive.

“We’ve seen people grab hold of them and say, ‘You can’t take Harry away, he’s part of the family now,’” Freeman says.

People start to feel connected to the plants, so it’s important, again, to communicate with workers about changes to their office design of any kind.

5. Hire a professional to care for the plants.
Freeman explains that plants are like any other business service, and they should be managed by professionals. Plants in commercial environments may have different needs than in a home garden, for instance. They may need special irrigation systems or lighting to stay alive.

Manhattan-based startup Updater is one company that has worked with a plant consultant, The Sill, to select plants that would survive in an indoor environment with low lighting. Species included snakeplants, philodendron, dracaena, calathea and more. The Sill also cares for the plants in the Updater offices every Monday.

“Just as you’d have a professional engineer look after your photocopier or your water dispensers,” Freeman says, “plants are just as important a part of your office environment, and they need that same degree of professional service if you want them to be doing their best for the people who work there.”

Related video: Unhealthy Employees Could Be Decreasing Your Company's Productivity

More About The Way We Work