The Twitter and Square founder closed out the Consensus conference with why he believes a global digital currency is an inevitability.
Next Article Add to Queue

Stay informed and join our daily newsletter now!
Will be used in accordance with our Privacy Policy
May 17, 2018 5 min read
This story originally appeared on PCMag


Twitter and Square co-founder Jack Dorsey is a rock star in the cryptocurrency space. Square started accepting Bitcoin in 2014, before nearly any other major credit card processing or payments platforms, and Dorsey has long been an outspoken advocate for Bitcoin and cryptocurrencies.

When @jack himself walked onstage to close out the Consensus conference in New York City, moderator Elizabeth Stark of Lightning Labs couldn't help but reference a famous crypto tweet about Jack Dorsey walking into a Bitcoin conference.

Dorsey touched on a host of different topics during his appearance: Bitcoin and the cryptocurrency landscape; the role both Square and Twitter might play in using and advancing blockchain technology; and why he thinks it's only a matter of time before we have a global digital currency. Here are some of the higlights.

On Square's decision to support Bitcoin in 2014:

Dorsey: I didn't really understand the implications of it until three or four years ago when we had some Square engineers who wanted to build Bitcoin acceptance into our online store. I said yes, it took about three or four months, and they made it so any seller could accept Bitcoin without knowing they were taking Bitcoin at all.

On the backlash to supporting Bitcoin as a public company:

Dorsey: This was a pretty contentious move in the company. We have a lot of healthy skepticism in the company and a lot of people were skeptics of the technology. [Square] always takes the mindset that we can't wait for things to happen to us. If we want responsible, healthy uses of this technology that I believe is a fundamental shift in our world with so many positive outcomes, we need to make that happen.

We pushed through and it really tested us. Not just because we're a public company, but because there was more of a spotlight on us. There are a lot of unknowns, and we just ran toward them and tried to figure them out.

On adding support to Square Cash in 2017:

Dorsey: With Square CashFree at iTunes Store another opportunity came up back in January 2017. I saw all these conversations on Twitter about it, and the community was interesting. It felt like Usenet all over again.

At a hackathon that January I asked one of our engineers if we could work on Bitcoin, and the next day we committed to a goal to build a system where using my Cash card I could go across the street to Twitter HQ and buy a cappucino with a Bitcoin. We worked all week and started listening to other folks as well. We almost got there...we ran into a deployment issue and didn't actually hit the goal, but it felt electric. We decided to dedicate Mike [the engineer] to building Bitcoin within Square Cash." 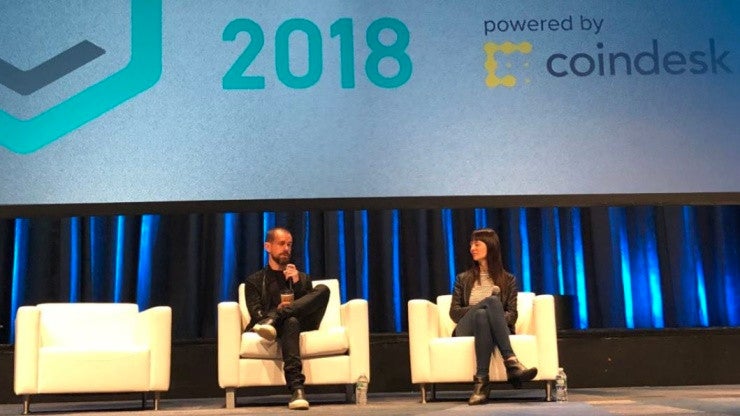 On the inevitability of a global digital currency:

On Square's role in the future of cryptocurrency:

Dorsey: The biggest thing I worry about as a company is making sure nothing from a corporate standpoint ever threatens the openness of the community and the open-source nature of cryptocurrency. No corporation or goverment body should own this. We're a centralized organization, but we can benefit from decentralization, and I want to see more of it.

The internet is going to have a native currency. That's our ethos, and we're going to do our part. If we ever go away from that, call us out, please. Hold us accountable to the right thing for the technology and the community. Our business concerns follow that. We can't do any of this without the technology being strong.

Dorsey: On the Twitter side, there are a lot of applications in trust and identity. We can apply a lot of those technologies toward the problems we're seeing in terms of misinformation, manipulation, and we're trying to fight scams as well. There are broad applications of the technology, and we're going to have an open mindset.

Related: 5 Ways to Participate in the Bitcoin Revolution

Is Cryptocurrency Coming Back or Going Away for Good? 6 Experts Weigh In.

Should You Invest in Bitcoin and Cryptocurrencies? Experts Share Best Practices in a Volatile (Yet Maturing) Market.

How Cryptocurrency Projects Are Tackling Transparency and Security Problems

9 Reasons the Crypto Market Is Down